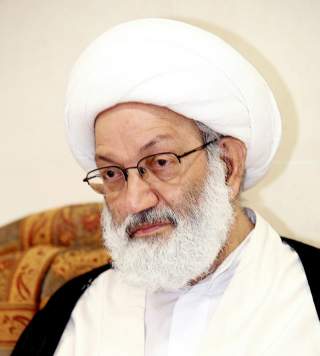 Shortly after the parliamentary elections in Bahrain last month, security forces raided the home of the country’s premier Shi’a religious scholar and spiritual guide for the opposition, Issa Qassem, in an act considered sacrosanct in the Islamic tradition.

The government claimed that it had raided Qassem’s home in search of a terrorist, who was not found on the premise. Many suspect the raid came in retaliation for his criticism of the electoral process, which is hardly democratic and is weighted against Bahrain’s majority Shi’a population.

Qassem, a longtime critic of the Sunni al Khalifa ruling dynasty and Bahrain’s equivalent to the influential Grand Ayatollah Ali al-Sistani in Iraq, called for Shi’a to boycott the election, advice that the main Shi’a opposition party in the country, al Wefaq National Islamic Society, followed. As a result, voter turnout plummeted in the election; although the government claimed voter turnout was 51 percent in districts with open seats, some estimates were as low as 30 percent. Either way, it was a significant drop off from the 67 percent voter turnout seen in the full parliamentary elections just a year prior.

Unsurprisingly, the raid on Qassem’s house ignited protests in Bahrain. More significantly, however, the incident set off a wave of angry demonstrations from Iraq to Lebanon, Iran and Germany, demonstrating the transnational impact of sectarian politics in the Middle East.  Nearly four years after the Arab uprisings began, including the revolt in Bahrain in 2011, sectarian identity is playing an increasingly important role within Arab societies.

One of us (Abdo) has witnessed this firsthand on trips to Bahrain since 2011, where the sectarian polarization was painstaking clear. More and more, Shi’a and Sunni socialize separately in public spaces, including self-segregation at universities. And, despite promises from the government, there has been little progress in addressing the political and socioeconomic grievances of the opposition.  Even before the uprising began in Bahrain, the opposition, which at one time also consisted of numerous Sunni groups, demanded democratic elections for the heads of state, such as the prime minister, who is currently appointed by the king.

To be sure, compared to the brazenly violent sectarian war in Syria, the conflict in Bahrain is mild. Yet, it should not be ignored.

There was a time when Shi’a-dominated states and non-state actors were reluctant to publicly defend their Shi’a brethren in other countries because it highlighted their minority status in the region. However, this apprehension has faded in recent years as a number of factors have converged to shift the regional balance of power in Shi’ites’ favor.

First, the survival of the Bashar al-Assad regime in Syria and a powerful Shi’a-led government in Iraq has emboldened Iran and Hezbollah.  Second, the rise of Sunni jihadist groups, such as the Islamic State in Iraq and Syria (ISIS) have cast Sunnis in a negative light. As a result, Shi’a political leadership has become much more appealing to many. And third, the growing detente between the U.S. and Iran – in ways both real and imagined – has turned the perception of the Shi’a underdogs living in a Sunni-dominated region on its head. Increasingly, Shi’a are seen by regional actors as a force that must be recognized and accommodated.

This was apparent from the harsh rebuke of the raid on Qassem’s house from Shi’a forces in the region and beyond. For instance, the television network al-Alam, which is funded by Hezbollah, accused the Bahraini government of stirring up sectarian strife and “terrorizing” national religious figures.  Hezbollah itself condemned the raid, calling it a “crime,” which represents “an underestimation of religious symbols and holy sites and a violation of laws and customs that protect the dignity and rights of the Bahraini people.”

In Baghdad, Moqtadar al-Sadr supporters protested in the streets and chanted slogans in front of the Bahraini embassy. In Germany, an association of religious scholars issued a statement saying, “Sheikh Qassem is not solely a Bahraini personality but he has a place in each believer’s heart across Muslim nations.”

Bahrain’s leading Shi’a youth movement, the February 14th coalition-- which, according to reliable intelligence reports, indirectly receives funding from Iranian sources--denounced the raid “as a show of stupidity, the consequences of which have not been calculated by the regime.” In condemning the raid, Iran issued the statement:  “Desecration of religious symbols and insult to popular religious leaders and scholars indicate the Bahraini government's bankrupt security and tribal approaches in dealing with peaceful protests by the country’s people.”

The Bahraini government immediately condemned Iran’s statement as an intervention into Bahraini affairs. Iran and Bahrain are long-time rivals and the grassroots escalation of the Shi’a—Sunni conflict has increased tension between the two countries on a diplomatic level.

Sheikh Qassem was not deterred by the raid and at his subsequent Friday prayer sermons continued to criticize the Bahraini government. In reference to the scores of Shi’a human rights activists that have been imprisoned since 2011, Qassem said at the sermon: “You want me to participate in elections while my son or nephew is imprisoned in your jails? Are you going to tell me that you do as you please with the prisoners and I have to stay quiet and submit?”

Just as the Sunni Arab uprisings spread from Tunisia to other Arab societies, so too does sectarian-based violence immediately cross borders throughout the Middle East. What happens in Bahrain is now a relevant issue for all Shi’a.