Fantasyland: Obama Is No Ronald Reagan 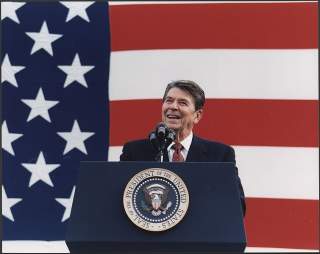 The White House has finally released the deal – or the “parameters” of a deal – to be made with Iran.

Proponents are exultant, believing that President Obama has finally secured a legacy in foreign affairs. Critics (and I am among them) believe that the United States has made a foolish bargain, especially since the president’s foreign policy legacy has already been secured in the morgues of Syria and the occupied territories of Ukraine.

Whether a nuclear agreement is a good or bad idea, however, it is not anything like the deal Ronald Reagan made in 1987 with the then-Soviet Union to eliminate intermediate-range nuclear missiles in Europe. This is so obvious, and so poor a historical analogy, that it should not even need to be said.

And yet, die-hard defenders of the Obama administration’s approach to Iran have been using it anyway, in a desperate attempt to shield a terrible policy from conservative critics under Reagan’s name. Even President Obama himself has invoked Reagan (and Richard Nixon), searching for an analogy somewhere between Reagan in Moscow and Nixon in China.

Here’s Peter Beinart, for example, in The Atlantic last week:

This is staggeringly wrong, and even completely backward, but let us forgive Beinart and ascribe his error, like Reagan said of Walter Mondale, to his youth and inexperience. Beinart’s strong support for President Obama might be clouding his judgment, or perhaps he does not know better.

But Joe Cirincione, a prominent member of the arms control community for years and now head of the Ploughshares Fund, definitely knows better. And yet, Cirincione gushed last week to MSNBC’s Alex Witt that “not since Reagan have we had a security agreement as long lasting, as sweeping, as historic” as the deal with Iran “could be.” And the Chicago Tribune even honored the memory of the Gipper for standing up to the hardliners in his own party to seek nuclear peace in the blessed year of 1987.

This analogy is so wrong in so many ways that it is hard to know where to start, but there are two important differences between now and 1987. First, President Obama is not Ronald Reagan. Whether Democrats secretly would like him to be is another matter, but Reagan had a credibility among America’s adversaries and a respect among America’s major allies that President Obama has never enjoyed.

Second, Iran is not like the Soviet Union of 1987. The USSR under the leadership of Soviet President Mikhail Gorbachev was a spent force, a state – unlike Iran – already repudiating its revolutionary ideology and looking for a way out of the dead end of its own recent history.

President Obama’s supporters will no doubt bristle at the unflattering comparison with Reagan, but so be it. From Bashar Assad to Vladimir Putin, enemy leaders have run roughshod over Barack Obama, who entered office insisting he’d talk to anybody, without preconditions. Reagan, by contrast, entered office by dumping a bucket of cold water – and perhaps not from the cleanest bucket, either – over the old men of the Kremlin, calling them liars and scoundrels. Reagan had Caspar Weinberger building up U.S. and NATO power arm in arm with Margaret Thatcher and other leaders; President Obama has National Security Adviser Susan Rice calling her German counterpart a name so vile it cannot even be reprinted with asterisks.

But let us accept, for the sake of argument, that President Obama has more credibility with the Iranians than many of his critics assume. Even if that is true, Iran in 2015 is not nearly like the Soviet wreck Reagan finally forced to the table. The people invoking Reagan’s 1987 success conveniently forget that Reagan first engaged in six brutal years of wrestling with a Soviet Union led by dangerous men like former KGB chief Yuri Andropov. Indeed, Soviet-American relations in Reagan’s first term were so tense they led a then-prominent arms control advocate (and general hysteric) named Helen Caldicott to declare in 1983 that if Reagan were re-elected, nuclear war between East and West “was a mathematical certainty.”

Reagan, unlike Obama, held firm to his initial position. In 1981, he proposed that both NATO and the USSR remove the offending weapons in Europe entirely. This “zero option” was dismissed out of hand by the Kremlin, and negotiations stalled for months on end. Finally, in 1983, the Soviets threatened to walk out of further talks in Geneva. The Americans did the unthinkable, and let the Soviets leave. This is what “no deal is better than a bad deal” really looks like.

When Gorbachev came to power in 1985, the Soviet Union was exhausted from its struggle with the West. Gorbachev was determined to get rid of the U.S. nuclear weapons in Europe, which he called “a gun to our head.” Reagan met the Soviet leader in Iceland in 1986, and once again rejected a deal – this time to rid the world of all nuclear weapons – because of unacceptable Soviet terms. Later Soviet accounts confirmed that this was the one move they had not expected and for which they were not prepared. The Soviet leadership, out of ideas, out of money, and out of friends, came back to the table yet again.

The verification regime Reagan agreed to with the Soviet Union back then would give the Iranians a collective aneurysm today. No new systems were allowed nor could any others be tested at prohibited ranges. There were no hidden caves and no prohibited photographs. U.S. and Soviet military officers went to each other’s countries and watched, personally, as each side counted and destroyed the weapons in the treaty. (This, too, is a major difference with the Iran deal: Reagan was closing out an existing stock of arms, not trying to titrate the strength of a new program led by people intent on subverting the goal itself.)

The most important point about the Iranian deal and how it differs from dealing with the Soviet Union of 1987 is how each regime reacted to the world around it. Iran, contrary to conservative arguments, is not too evil for negotiations. The Soviet Union was also evil, and more dangerous: it was a brutal, expansionist power bent on replicating its misbegotten system on the entire world by revolutionary force. But by 1987, Soviet leaders were suing for peace in the Cold War. They rejected their own ideology. They became, as much as was possible for them, a status-quo power, invested in the international system as it was constituted.

A status-quo power is a country that can make and maintain a deal. Iran is many things – authoritarian, theocratic, delusional – but it is not a status-quo state.

In fact, Iran has undergone none of the damage suffered by the Soviet Union in its waning days. It is not coming apart in a whirlwind of ethnic strife, nor are its people starving. It is still a revolutionary power, and instead of seeking accommodation with the United States, it is taking the outcome of these negotiations as vindication of the regime’s power and legitimacy. Iranians who should be objecting to the way the regime strings up their fellow citizens on cranes are dancing in the streets and celebrating the victory of their leaders over America.

This is not even close to the situation in 1987, because for six years Obama and his team did nothing to create such a situation. Reagan prepared the ground and fought on his preferred terms. By contrast, this White House has blundered from crisis to crisis, only now to wade into the wreckage of its own actions in the vain hope that it has found an Iranian Gorbachev.

Reagan weakened the USSR, watched Moscow change first, and then made a good deal. Obama has done the exact opposite: he has empowered Iran, and is making a bad deal first in the hopes Tehran will change later. Obama is betting, in effect, that Iran is not really like Iran.

In the end, the use of Reagan’s name by people who have never shown a shred of admiration for Reagan should itself be a sign that something is amiss. Much like the “Godwin’s Law” of the internet, in which any pitched argument will inevitably devolve to the use of Hitler as an analogy, I herewith immodestly propose The Nichols Rule: “When a liberal invokes Ronald Reagan’s name to defend a specific policy, it is almost certain to be a policy Reagan would never have defended.”

Tom Nichols is Professor of National Security Affairs at the Naval War College and an adjunct at the Harvard Extension School. His most recent book is No Use: Nuclear Weapons and U.S. National Security (University of Pennsylvania, 2014) The views expressed are his own. You can follow him on Twitter: @RadioFreeTom