Fareed Zakaria vs. Max Boot: Who's Really Right on Iran? 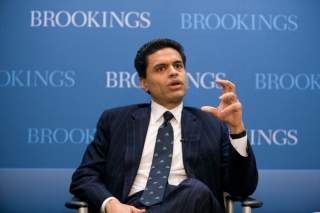 The “Joint Comprehensive Plan of Action (JCPOA)” that the United States, the EU, France, Germany, the UK, China and Russia finalized with Iran on July 14 is perhaps the most controversial post–Cold War foreign policy agreement. The 159-page document is not exactly a masterpiece of prose, so those seeking a primer on the principal disagreements dividing the deal’s opponents and proponents should turn to two recently published open letters.

The first, written by CNN commentator Fareed Zakaria, supports the deal and is directed to Senator Chuck Schumer, who on August 6 issued a statement opposing it. The second, issued by Council on Foreign Relations foreign-policy expert Max Boot, addresses Zakaria, challenging his defense of the deal. Both are cogent, serious and refreshingly devoid of the blowhard rhetoric often deployed in debates on the accord.

Zakaria rightly touts the JCPOA’s thoroughness in blocking Iran’s path to a nuclear bomb, whether uranium- or plutonium-based.

The agreement prohibits Iran from enriching uranium beyond 3.67 percent. (Natural uranium contains 0.71 percent of the UR-235 isotope. A 90-percent concentration is best suited to making nuclear weapons; anything below 20 percent, i.e., low-enriched uranium, effectively rules it out.) Even enrichment to the level permitted is limited to the Natanz facility. Two centrifuge cascades can spin at the Fordow facility but cannot be infused with uranium hexafluoride gas (UF-6).

All operational machines must be the older, problem-prone IR-1 models, and the maximum number allowed is 5,060. Iran now deploys some 20,000 centrifuges, and Natanz can house as many 50,000, Fordow nearly 3,000. So this constitutes a deep cut. Surplus centrifuges (IR-1 models and the more advanced IR-4, 5, 6, and 8 types) must be stored, subject to constant IAEA monitoring through electronic seals and surveillance, plus on-site inspections.

Iran is limited to 300 kilograms of low-enriched uranium at the permitted level of concentration, not counting purchases from external suppliers for operating its reactors. The upshot is that it must forfeit all but 2 percent of its current stock. The excess must be exported to an international buyer or “down-blended” to natural uranium. Another deep cut.

Iran’s path to weapons-grade plutonium (PU-239) is also blocked. Its Arak heavy-water reactor must be redesigned, rebuilt and fueled with uranium enriched to a maximum of 3.67 percent. Pending that, it will be disabled, its core removed and filled with concrete. Spent fuel from current and future Iranian reactors cannot be reprocessed; it must be exported “for further treatment or disposition.” Finally, Iran is barred from building plutonium-reprocessing facilities or conducting related R&D.

Sanctions will be removed only once the IAEA certifies Iran’s fulfillment of these commitments.

Boot does not dispute these details, though he does argue that Iran’s (limited) leeway to conduct R&D and testing on its more advanced centrifuges during the deal’s first decade will improve its capacity to make nuclear weapons once the other JCPOA restrictions expire in fifteen years.

His main disagreements with Zakaria concern the agreement’s verification provisions, even though JCPOA provides for extensive monitoring, supplementing continuous electronic surveillance with on-site inspections. The number of IAEA inspectors will be increased to a maximum of 150, and they will maintain a permanent presence in Iran. Provided Iran ratifies the 1997 IAEA Additional Protocol (which it signed and adhered to between 2003 and 2006, but did not ratify), the ambit of verification would extend beyond declared nuclear sites and increase the information Tehran must disclose. Boot nevertheless believes that Iran will manage to cheat and dodge detection.

Boot’s other key objection concerns the lifting of sanctions on Iran in exchange for its implementation of JCPOA. He argues that once the sanctions are removed, they will not be reapplied, even if Iran violates the accord.

So who’s right on balance?

Boot’s comprehensive critique certainly flags some of JCPOA’s weaknesses, and he is right to point out that its restrictions last ten to fifteen years, their effectiveness attenuating thereafter. Zakaria concedes that JCPOA “is flawed” but says nothing about its shortcomings or even its ambiguities. Among the latter is whether the renewal of sanctions in the event that Iran violates the agreement would nullify the long-term business deals it may have signed in the meantime. In an excellent assessment of the agreement, the distinguished nuclear arms control expert Robert Einhorn states that such contracts are not protected. Still, the agreement’s wording is unclear, to put it mildly, and thus open to dispute.

The inspection arrangements vary and are not all as tough as those applying to Natanz and Fordow. The Additional Protocol must be ratified by Iran, and even then its application is voluntary. The military site at Parchin, where Iran is suspected to have carried out work related to nuclear weapons, is not covered by the JCPOA or subject to constant surveillance, Iran having consistently ruled out unconditional access to its military installations. Iranian personnel will be involved in verification there, but not exclusively or without being monitored. (The IAEA has stated that the separate agreement it has reached with Iran on Parchin, to which it has not had access since 2005, meets its verification standards.)

Yes, Iran could conceivably find ways to evade the JCPOA’s restrictions using small, undeclared locations. But enriching uranium covertly on a large scale with numerous advanced centrifuge cascades would be all but impossible. The biggest concerns about Iran’s nuclear program have centered on uranium enrichment at Natanz and Fordow and on plutonium reprocessing. In both these spheres the agreement imposes substantial restrictions, backed by exacting and multiple forms of verification.

It’s unclear why Boot believes the accord strengthens Iran’s capacity to build nuclear weapons fifteen years hence—not a trivial chunk of time in any event—at an accelerated pace. True, during the first ten years of JCPOA, Iran is permitted to conduct R&D and tests on its advanced centrifuges, but subject to significant constraints. Even after ten years, Iran does not have free rein. The Lausanne parameters require it to “abide by its enrichment and enrichment R&D plan submitted to the IAEA, and pursuant to the JCPOA, under the Additional Protocol resulting in certain limitations on enrichment capacity.” Moreover, the strict limits on uranium enrichment and on plutonium reprocessing continue for another five years.

Thus the accord is a system of interlocking restrictions, not a collection of limits, separate and self-contained.

Those, including Boot, who have advocated military strikes on Iran’s nuclear facilities, claiming that it is on the brink of building nuclear weapons cannot now credibly claim that tough limits that last for a decade and a half and increase the time Iran needs to stage a breakout are lousy.

Boot’s stated standard for success is Libya and South Africa, which he notes uprooted their nuclear program. But Iran would never have agreed to follow suit. If Congress rejects JCPOA, America’s European allies, to say nothing of China and Russia, will not abandon an agreement for which they have invested considerable time and continue with sanctions on the theory that Iran will eventually cave, emulating Libya and South Africa. Boot’s insistence that they will if America insists is conjecture.

His contention that Iran could dodge inspections for three months or more, rather than the twenty-four-day delay it could obtain under the verification dispute resolution procedure, is also not persuasive. To begin with, this reprieve applies only to undeclared nuclear sites; declared facilities can be inspected within a day or even a few hours.

In the event of verification disputes, JCPOA mandates that Iran and the IAEA make a good-faith effort to reach an agreement, using up to fourteen days. If they fail, an eight-member Joint Commission, comprised of the agreement’s signatories, has one week to issue a ruling. Iran then has three days to act. Contrary to what some critics of the deal imply (even proclaim) Iran is not guaranteed a twenty-four-day delay, let alone for all sites.

Even if China and Russia were to consistently back Iran in the Commission, the United States and its allies—the EU, the UK, France and Germany—would have a 5-8 majority. This does not mean that Iran could never prevail, but the deck is certainly stacked against it.

But let’s assume that Iran, as Boot fears, tries to drag out the dispute resolution process for months. Rather than standing by, the United States would charge Tehran with violating JCPOA. That would automatically trigger the renewal of sanctions under the “snapback” provision. Sanctions could be removed through a fresh Security Council resolution. But Iran’s prevarications would very likely have alienated America’s allies within the P-5 (Britain and France) and also made it easier for Washington to win over other members of the Council. Even if it were isolated, the United States could veto the resolution.

Boot argues that Iran could then renounce the deal, executing its own snapback. That’s possible, but not plausible. Anyone who reads the JCPOA will be struck by how meticulously—using many pages—Iran’s negotiators have detailed the sanctions that must be removed and the Iranian entities that have been affected. Clearly, escaping the sanctions chokehold is vital for Tehran. Why then would it risk squandering the gains for which it bargained so tenaciously?