The Federal Reserve's New Approach: Say Nothing and Expect Change 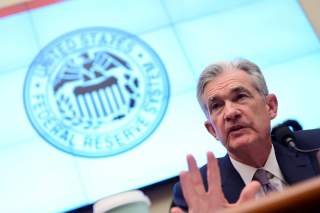 Reports of a media blackout enforced on those under the purview of Federal Reserve Chair Jerome Powell came as a surprise. While unconfirmed and somewhat tenuous, the reports were intriguing for a variety of reasons. Without the most prominent members of the Fed allowed to give speeches and grant interviews, how will the Fed be able to direct expectations for monetary policy? The vacuum of silence is going to be deafening.

The Federal Reserve has assumed that people care about what it has to say. This has been the case for years. When quantitative easing and “near zero” interest rates were in force, the policy tool of talking was a Fed favorite. By inundating the public with speeches and hints about the direction of the future of monetary policy, this so-called “forward guidance” could steer monetary policy expectations. Forward guidance is a powerful tool when used properly. Unfortunately, the Fed does not appear to have considered what might happen when people stop caring about what it has to say.

That moment is here.

From afar, this might look like a perplexing move by Chairman Powell. Except it isn’t. Instead, this may be the silence that refreshes. No one cares what a regional Fed president has to say. They don’t care about a regional president who seems to unveil in his daily interviews a policy idea that is entirely divorced from the policies that actually become a reality. Not only are there conflicting views on future monetary policy, but there is a diversity of views on the goals and purpose as well. Attempting to glean coherent, thoughtful content from the deluge of Fed speak has become frustratingly impossible.

There is no longer any credibility in forward guidance. It has evolved into economist jibberish that lacks any true purpose. This is partly because the Federal Open Market Committee (FOMC) participants do not agree on what to do. As of the latest Summary of Economic Projections, which includes the Fed’s “dot plot” of members expected paths for the policy rate, the median FOMC member saw no change as the outcome of monetary policy for 2019. This betrayed a diverse range of outlooks upheld by many who foresaw two rate cuts while others foresaw further hikes. These views were so different that it is no wonder the speeches of FOMC members are incoherent.

It is fine to have a plurality of views. It may even lead to a better policy outcome. But nuanced and conflicting views only destroy the efficacy of forward guidance. If the purpose is to provide clarity and a view of the future path of policy, then forward guidance has outlived its usefulness.

Compounding the issue is the Fed’s current revision of its monetary policy framework. Not only does every Fed speaker seem to have their own thoughts on what and how to target with monetary policy, but the consequences of a final decision could also be significant. For example, the difference between a “nominal GDP target” and a “2 percent price level increase” might sound academic, but the difference in the conduct of monetary policy could be substantial.

Could a halt to the Fed speak be detrimental? Sure. But only through the market reacting to the data and not the Fed speak. Is that such a bad thing? Probably not. In fact, it makes the signal from the market more powerful by eliminating the noise of Fed speak.

Market reactions resulting from the Fed speak are heavily tilted toward governors and the chairman, and this makes the move by Powell to muzzle the governors even more interesting. If the ones that matter the most aren’t talking, then the talk that is happening should have little effect on expectations. No one should care what is being said.

In some regards, this might be one of the Fed’s better moves. The message was being muddled (if there even was a coherent message to be relayed) and silence may be the only solution to poor communication. It may even save forward guidance as a tool for when it really matters—during the next recession.

It is almost sad that no one cares. The Fed took an important, cheap policy tool and ruined it. Forward guidance is far from dead, but it is a zombie policy tool. It will live on in its current half-dead state, attempting to steer markets with a myriad of competing speeches and TV interviews. Should anyone care? No. But, by taking a deep breath and talking less, the Fed may find that people begin to once again care about what it has to say.