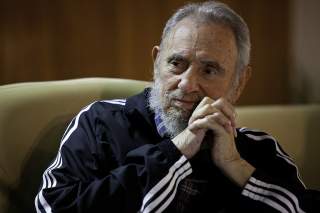 Fidel Castro was one of the most polemical political personalities of the twentieth century. His complex historical legacy will be admired by some and despised by others. The son of an affluent Galician landowner who settled in Cuba’s Oriente province, Fidel spent most of his adult life combating bourgeois society.

The young lawyer launched a guerrilla movement to overthrow Fulgencio Batista’s dictatorship (1952–58) in Cuba. With the assassination of other leaders of the urban insurrection (such as José Antonio Echeverría and Frank País), Fidel became the undisputed head of the Cuban Revolution. He came to power in 1959 after the collapse of the Batista regime.

He later became Prime Minister, President, Commander in Chief, and First Secretary of Cuba’s Community Party, controlling the most powerful positions on the island for almost five decades. He ruled Cuba with an iron fist until 2006, when he temporarily ceded power to his younger brother Raúl, due to an acute gastrointestinal disease that diminished his physical and mental abilities.

Fidel’s charismatic leadership—characterized by his shrewdness, eloquence, audacity, energy and physical strength—captivated millions of followers in Cuba and elsewhere. A hypnotic and telegenic public speaker who could seduce multitudes, Fidel knew how to take advantage of the mass media to convey his messages. At the same time, impulsiveness, a capacity for improvisation, demagogy and narcissism were legendary traits of the Maximum Leader.

In his long-winded speeches, Fidel identified himself with “the wretched of the earth,” to use José Martí’s famous phrase, especially with peasants and workers, and elaborated a utopian vision of social justice, equality and solidarity. He defended tooth and nail the national sovereignty of Cuba and other developing countries against foreign intervention, particularly from the United States. The role of David against Goliath earned him numerous sympathizers in Latin America, the Caribbean, Africa and Asia.

Fidel constantly advocated for public access to education, health, sports and culture, often considered major achievements of the Cuban Revolution. In the early 196os, he (prematurely) declared the end of racial discrimination on the island and later dubbed Cuba an “Afro-Latin American” country. He catapulted the island to the world stage, converting it into a much more influential political actor than would correspond to its size and population.

Castro’s revolution, however, had an enormous political, social and economic cost. Fidel’s messianic vocation to save oppressed people from external and internal enemies led him to embrace armed struggle as a political strategy, export it to other countries, and militarize Cuban society. Between the 1960s and 1980s, his growing alignment with the Soviet bloc pushed the world to the brink of a nuclear holocaust and exacerbated numerous international confrontations, especially in Africa and Central America. Revolutionary Cuba played a largely subordinate role to the Soviet Union during the Cold War.

Fidel’s urge to consolidate and retain power annihilated opposition leaders and alternative currents of opinion. His government dismantled the institutions of pre-revolutionary civil society and replaced them with mass organizations that responded directly to the regime. His personal obsessions, such as his profound homophobia and his juvenile antipathy toward religion, resulted in the marginalization of ample sectors of Cuban society.

During the 1960s, the revolutionary government headed by Fidel expropriated all private businesses on the island, both large and small, national and foreign-owned, creating a state monopoly of the means of production and the mass media. The Castro regime’s increasingly radical measures spurred the exodus of the upper and middle classes, which later extended to broader layers of Cuban society. The 1940 Constitution, free elections with multiple parties, and guarantees of civil liberties were suspended indefinitely. During the 1970s, Cuba implemented a Soviet prototype that embraced the Marxist-Leninist tenets of a single-party state and centrally planned economy. Fidel’s imprint in all these historical processes was overwhelming.

After the fall of the Berlin wall and the disappearance of the Soviet Union, Cuba became isolated from much of the world and its socialist system appeared increasingly obsolete. Fidel and his closest associates were forced to initiate some economic reforms (such as legalizing the use of the dollar and revitalizing tourism) to ensure the regime’s survival during the 1990s. His brother Raúl would eventually oversee the “updating of the socialist model,” encouraging the expansion of economic activities such as self-employment and foreign investment. Toward the end of his life, Fidel reasserted his distrust of the capitalist system and “Yankee imperialism.”

With Fidel’s death, an unprecedented phase in Cuba’s history begins, whereby the ruling elite must transfer power to a new generation born after the Revolution. It remains unclear who, how, or what system will succeed the Castro brothers, once Raúl retires from the presidency in 2018, as announced. For the moment, Communist Party cadres will probably hold onto power, with minor changes in their composition. The most likely scenario is that of a regime modeled after the Chinese or Vietnamese experience, centered on the state monopoly of politics and a partial opening to the market economy.

It is perhaps too early to determine if “history will absolve” Fidel Castro, as he claimed in his speech during his 1953 trial by the Batista regime. But he was undoubtedly a figure of both lights and shadows, beloved as well as hated by millions of Cubans and others around the world.

Jorge Duany is Director of the Cuban Research Institute and Professor of Anthropology at Florida International University in Miami.