Fidel Castro's Vietnam: Thousands of Cubans Were Sent More than 6,000 Miles Into a Bloody Civil War 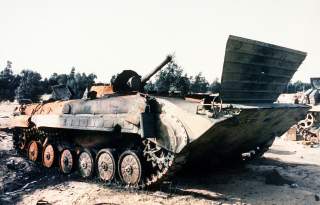 Fidel Castro is still dead. I say that only partway in jest, since the Cuban Americans I’ve spoken to this week are almost uneasy in their jubilation, as though El Comandante’s demise could prove a cruel joke and his hirsute countenance could reappear tomorrow on a balcony in Havana. Castro’s legacy is one of firing squads, palled dungeons, concentration camps, squalid collective farms, the abrogation of essential freedoms, the annihilation of an economy, the luxuriant profiting of a regime at the expense of its people, the glazed eyes of useful idiots being shown around Potemkin hospitals and the omnipresent specter of a mushroom cloud.

It’s also one of foreign intervention, though you wouldn’t know it from Castro’s stridently anti-imperialist rhetoric. Cuba readily inserted itself into a number of foreign conflicts during the 1960s and 1970s, usually under the command of T-shirt tactician Che Guevara, whose modus operandi of “internationalism” compelled the fomenting of revolutionary movements towards the realization of a world workers’ paradise. These interventions took Cuban fighters to Bolivia, Guinea-Bissau and Somalia, but Havana’s heaviest investment was in Central Africa. Guevara viewed the Congo, located at the heart of the continent and roiled by violence, as a fulcrum that could be used to leverage revolution throughout Africa. He was both ambitious and naïve, superimposing his ideological vision on one of the world’s most turbulent regions without ever understanding the myriad conflicts that raged underneath.

In January 1965, Guevara convened with a leftist group called the People’s Movement for the Liberation of Angola (MPLA), which he asked to deploy guerillas to the Congo. The MPLA declined, too preoccupied with its own insurgency in Angola, which had gotten it expelled to neighboring Congo-Brazzaville (today the Republic of the Congo). So Guevara pressed on into the Congo with his fellow Cubans, where the intervention quickly turned into a debacle, stymied by unreliable Congolese who he later claimed didn’t understand how to shoot guns. The attempt to spark a revolutionary war failed and Guevara left Central Africa in ignominy. He later wrote a diary of the Congo campaign that began: “This is the story of a failure.” But while Guevara’s reputation was tarnished (he would die less than two years later in Bolivia), Cuba’s relationship with the MPLA emerged intact. Havana shifted its African focus to Congo-Brazzaville, where the MPLA was operating, and the two began a decades-long alliance there.

Angola, a vast mineral-rich nation on Africa’s west coast, was at the time colonized by Portugal. The left-leaning Carnation Revolution changed all that, deposing the Portuguese regime and liberating all of its African colonies. Angola declared independence in 1975, but the MPLA was not its only heir. The group was challenged by both the National Union for the Total Independence of Angola (UNITA) and the National Liberation Front of Angola (FNLA), right-wing militias supported variously by Zaire, South Africa, and the United States, which viewed them as bulwarks against the Soviet-backed MPLA. Tensions mounted and the Portuguese exacerbated them by high-tailing it out of Angola after independence, with little effort expended towards a transition or a truly durable peace. The fragile power-sharing armistice they’d drafted collapsed almost immediately, UNITA declared war on the MPLA, and a civil war began that would stretch for the next twenty-seven years.

Cuba, eager to bolster its old stalwart the MPLA, expeditiously deployed troops to Angola, a move that incensed then-secretary of state Henry Kissinger. Where Guevara had his ideological internationalism, Kissinger had his calculated global chess: he was haunted by the prospect of a communist vantage point in Central Africa, as well as the threat posed by a muscular Havana. Kissinger drew up plans for the United States to bomb Cuban forces in Angola, only to have them scuttled when the more dovish Jimmy Carter beat Gerald Ford in the 1976 presidential election. America and the Soviet Union, chary after the bloodletting in Vietnam, would abstain from another direct war and instead limit their roles to providing military aid, ceding Angola to Cuban troops as well as those from nearby South Africa.

Early on, UNITA allied with the FNLA against the MPLA and formed a rival government, though the FNLA quickly melted away, leaving the MPLA ruling out of the capital, Luanda, while UNITA waved the banner of rural right-wing resistance. South Africa, which at the time controlled Namibia to its north and thus technically shared a border with Angola, intervened on behalf of UNITA, most notably in 1980 when it invaded Angola’s southern provinces. This infuriated Havana, which eventually upped its troop commitment to as many as 65 thousand. Going tit-for-tat, the two countries’ respective apartheid and communist governments served as ideological targets for the other. The powder keg finally exploded at the 1987 Battle of Cuito Cuanavale in southeast Angola, which saw South African and UNITA forces halt an MPLA militant blitz in a seven-month maelstrom of warfare that ranks today as the second largest combat event in African history.

Though both sides claimed victory at Cuito Cuanavale, the fighting left behind deep and searing shell shock. Angola had rattled the Cuban psyche even before the battle, and for good reason. Rafael del Pino, a Cuban air force general who defected to the United States, revealed in the summer of 1987 the extent and futility of Cuba’s Angolan commitment: ten thousand Cubans killed, 56 thousand Cuban Army desertions in three years, callow recruits sent into gunfire with almost no training, morale in the dregs. “Only Fidel and Raul Castro have any faith in victory,” del Pino said. The carnage at Cuito Cuanavale cemented the grim reality: Angola was Vietnam, for Cuba and probably for South Africa, too, and with the Soviet Union crumbling, the Cold War impetus behind the conflict had slackened.

Less than a year after Cuito Cuanavale, delegations from Angola, South Africa and Cuba huddled at UN headquarters to sign the Tripartite Accord, a remarkably productive diplomatic accomplishment that granted Namibia independence and provided for the withdrawal of South African and Cuban troops from Angola. The last Cuban military units left in 1991, and while the civil war would continue desultorily for the next eleven years, it cooled after both sides lost their foreign benefactors.

The curtain thus fell on the largest military operation in Cuba’s history, one that flung countless Cubans more than six thousand miles across the globe onto an exotic and Sisyphean battlefield. They were fighting for their homeland’s ideology, communism, though their class ideals were scrambled by UNITA and its claim to represent the “real Africans” against the MPLA’s metropolitan elite. Ethnicity was also a factor, with the MPLA and UNITA representative of the Ambundu and Ovimbundu peoples respectively. Those ethnic chasms were pried open in part by Angola’s Portuguese subjugators—a familiar African story if ever there was one—and they ended up frustrating the Cuban outsiders who didn’t fully understand them. Americans, forced to cram on Sunnis and Shias after George W. Bush’s democratic aspirations proved a mirage in Iraq, will relate to this awful lesson.

Unlike, say, the universally acknowledged horror of the Rwandan Genocide, the Angolan Civil War is still viewed through a variety of prisms. Radicals exalt a glorious show of resistance against the imperialistic West, conservatives yelp at the tiptoe of communism through the jungle, Africans and many African Americans appreciate Cuba’s pushback against South Africa’s apartheid state. But viewed in its totality, the Angolan Civil War today seems more than anything like a bloody shame, an unnecessary escalation of another third-world conflict in the name of a Cold War that was by then approaching its twilight. Fidel Castro’s legacy already has plenty of demerits, but surely we can find room for one more.

Image: Iraqi BMP-1 IFV sits in a field after being destroyed during Operation Desert Storm. Wikimedia Commons/Department of Defense