Fidel: What's In A Name? 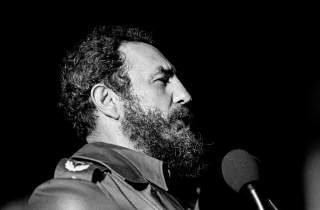 His name itself was totemic. The cipher and symbol for a whole host of political dreams born and then, for many, broken; for new world imaginaries erected and slowly unspun; for the Manichean struggle of a small Caribbean island that dared to confront imperialism while consuming some of its own in the process: Fidel Castro was a man who bore an entire universe of meaning on his shoulders. Meaning, of course, that he had heaped there himself in conflating the island’s destiny with his own personalistic rule, an equation perfectly captured in the literal translation of his name— “Fidel,” which in Spanish means “faithful.”

Even before the Cuban Revolution assumed power in 1959, it was his name—Fidel—that his followers bore as a symbol of political affiliation, while foreign commentators speculated about the ideological direction the Revolution would take. “Fidelista, no comunista” (“‘Fidelist,’ not Communist”): the persistence of that formula speaks to the inherent ambiguity of his political legacy. Over the course of his first decade in power, Fidel Castro steered the Cuban Revolution in a radicalizing and ultimately socialist direction, a transition that drove some of its former partisans into the opposition. He quickly moved to consolidate his political authority, branding as treasonous any challenge to his leadership and the direction it had taken. Only in the 1970s would some institutionalization of the revolutionary project take place. Even then, however, Fidel would remain at its ideological center, framing Cuba’s destiny as one of enduring and intractable opposition to U.S. hegemony. The symbolic significance thereby attached to the Revolution and Fidel’s governance allowed him to pursue political projects in defiance of the reigning geopolitical common-sense, from his support for African and anti-colonial liberation struggles (as we now know, against Soviet wishes) to Cuba’s leadership in the non-aligned movement. Yet the essential equation of one man’s leadership with the fate of the Revolution also left Cubans with few avenues to register critique, or to shape those policies themselves.

How, then, to draw the balance sheet of five decades of fidelismo? What will be remembered, and what forgotten—or even “absolved,” as Fidel famously predicted in 1953? Supporters, both foreign and domestic, tend to cite the Revolution’s impressive achievements in health, education, and social welfare; others point to the fragility of those same accomplishments in both the past and the present. They undoubtedly came at a serious cost: critics highlight his government’s authoritarianism, suppression of dissent, and ideological inflexibility, with lasting consequences for Cuba’s economic and political future. Even so, all around the world, one can still find committed apostles of the mission and message promulgated by the revolutionary island.

The duration of historical memory is unnervingly short, and so it is striking to see references to Fidel’s very longevity as the most outstanding feature of his rule. Indeed, against all odds and all predictions to the contrary, Fidel’s government would survive even the 1991 dissolution of the Soviet Union and the economic devastation it unleashed it Cuba, remaining in power until severe health problems forced him to turn over the reins to his brother Raúl Castro in 2006, first temporarily and then permanently in 2008. Since then, Raúl has initiated a process of halting but unmistakable revision to Fidel’s legacy, from incipient expansion of the non-state sector to plans for a political transition to non-Castro leadership. Most remarkably, in December 2014, Raúl Castro and Barack Obama announced that the erstwhile Cold War foes would embark on a process of diplomatic normalization, culminating in the reestablishment of embassies and Obama’s own visit to Cuba last March. From the sidelines, Fidel continued to register caveats and objections to rapprochement with the United States. But, more and more, they seemed not to matter. Undoubtedly, Fidel’s words and example continued to inspire some and vex others, even after he stepped down as president. There was a sense, however, that he was increasingly out of step with the world around him, not just abroad, but even among his fellow Cubans.

I have only known this post-Fidel Cuba, yet much has changed since I first traveled to the island in 2008. How disorienting it was at the time to depart a city (Miami) where Fidel’s name was thrown around with great fury, pain, and abandon, only to reach another city (Havana) where it was rarely uttered aloud. Where a simply gesture—the stroking of the chin, in metonymic reference to the allegorical beard—was enough to insinuate his presence. A beard that itself was invested with such symbolical potency that the CIA would draft a risible plan to defoliate it as a means to undermine his authority. Gradually, however, I began to hear his name on the island, too: first uttered surreptitiously and even defiantly but then matter-of-factly, as the aura once attached to it began to evaporate. Fidel Castro became a person, mortal, just like any other, as Cubans more openly raised questions about the legacies of his leadership and its implications for their futures.

Diplomatic normalization with the United States has carried these conversations into the international media, but they began well before it. Many outside of Cuba have long posited that only Fidel Castro’s death would force a political reckoning within Cuba—hence the record tally of failed CIA plots to assassinate him. In the exile community, those who had once opposed the equation of Cuba’s political destiny with his leadership have largely concurred, greeting periodic rumors of his (impending) death with celebration over its presumed consequences. As a result, however, the outside world largely missed what was arguably the more important story: signs that this totem had largely dropped out of ordinary Cubans’ political imaginaries, that young Cubans in particular were mostly indifferent to the allure and taboo his name had once borne.

In recent days, many questions have been raised about the implications of recent news—from Castro’s death to the election of Donald J. Trump—for Cuba’s future. Fidel for one surely was not surprised to witness another turn in the volatile relationship between Cuba and the United States; he might even have relished the validation it seemed to offer of his own intransigent position. We would do well, however, to listen more closely to the evidence we have already been afforded on the ground in Cuba, and for some time. Some will mourn, to be sure, but others will greet this with quiet resignation, numbness or apathy, but also resolve: that Cubans should be granted an opportunity to forge a future on their own sovereign terms, under the shadow of no foreign power and beholden to no totem.

Jennifer Lambe is an Assistant Professor of History at Brown University and author of the forthcoming book Madhouse: Psychiatry and Politics in Cuban History (University of North Carolina Press).