The Fight for Afghan Women’s Rights Is Just Beginning 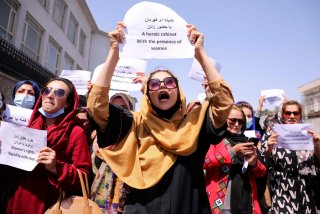 The Taliban’s persecution of Afghan women and ethnic minorities reveals the vindictive face of radical Islam and underlines the urgency of collective action against its tyranny.

The persecution of Afghan women is pervasive and pitiless. Women have been systematically and summarily dismissed from their government jobs, even from completely apolitical posts that do not involve contact with the public, such as water-filtration engineers. Schoolgirls cannot study after the age of twelve. Female teachers have lost their jobs because only men can teach boys. Several university students have phoned me from the provinces to express their concern about their uncertain future.

Some of the Taliban’s prejudices are surprisingly petty. In some provinces, where the climate is hot and dry, the Taliban force Afghan women to wear both burqas and socks to cover their feet. (In their earlier government, in the 1990s, socks were not required for women wearing sandals.) While the socks soon become dirty and uncomfortable, the Taliban say they are guarding against the sexual temptation posed by exposed toes.

The Hazara people, an ethnic and religious minority in Afghanistan, are among the Taliban's main targets. They are physically distinctive, speak a different language, and, too often, singled out for abuse by the shorter, Pushtun-speaking radicals now in power.

For two decades, the Taliban have been biding their time in Pakistani madrassas, debating, arguing, planning. In those long years, they learned no moderation.

Taliban fighters and commanders who know only war and weapons cannot accept the social and economic changes in Afghan society, especially the financial independence of educated women and the hard-won prosperity of non-Pushtun ethnic groups. To ask the Taliban to respect women or the rights of minorities is to ask them to preserve the gains of the regime that they toppled. It is against both their ideology and their inclination to do so.

In Mazar-e-Sharif, the capital of Balkh province, which borders Uzbekistan, several dozen women and men were also present last week in Darwaze-Jamhori Square, east of the city's majestic blue mosque. Under the large ceramic portrait of Commander Ahmad Massoud, the best enemy of the Taliban, the new masters of the city, the traffic was dense and street vendors prepared their stalls.

A group of a dozen young women, aged between twenty and thirty, began chanting slogans in the name of freedom to demand a government that included women. Tense, they knew that the protests had to be declared to the Ministry of the Interior in order to be authorized. The Taliban, who quickly arrived, formed a security cordon preventing other women from joining them, as well as young men who came to support them.

This courageous resistance is perhaps the result of twenty years of American presence in Afghanistan, which helped make Afghan women into a genuine political force. More numerous and more representative, Afghan women today embody the last resistance to the Taliban.

How can we help these courageous women? The Biden administration has frozen Afghan government funds that are held in U.S. banks. Other NATO allies should follow suit.

Also, the United States should use its influence at the World Bank and International Monetary Fund to deny funds to the Taliban until it recognizes the equal rights of women.

But above all, the fight against the export of poppy must be intensified. Without heroin and other illegal drugs, which the Afghan underworld transports to Iran for shipment through the former Soviet states to Russia, Europe, and North America, the Taliban would be starved for cash. Fighting the scourge of drugs and the terror of the Taliban is what policymaker call a “two-fer.”

Finally, pressure must be brought to bear on Pakistan, the Taliban’s most reliable ally. Arms sales, and things Islamabad values, could be suspended until the Taliban is brought to heel.

Of course, the U.S. State Department should do what it can to work with the Taliban, to exfiltrate trapped Americans and their allies. But there should be no talk of “normalizing” diplomatic relations with a terrorist group until it normalizes its treatment of women and ethnic minorities. Treating the Kabul regime as a normal country, without those changes, would be likely to undermine what unites the United States: its values.

Ahmed Charai is a publisher of The Jerusalem Strategic Tribune. He is on the board of directors for the Atlantic Council, an international counselor of the Center for Strategic and International Studies in Washington, and a member of the Advisory Board of The Center for the National Interest.