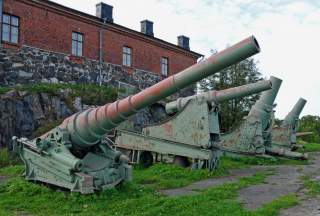 “Finlandization” is the term for a small nation, located next to a much bigger nation, that maintains a foreign policy of careful neutrality. In return, its bigger neighbor doesn't crush it.

Can you guess which country Finlandization is named after? Good guess! Having your country become a synonym for neutrality isn't exactly a compliment, but if national survival is a worthy achievement, then Finlandization has worked for Finland for almost a century. Despite being on Russia's northern border and losing two wars with the Soviet Union in 1939–40 and 1941–44, Finland has remained independent and democratic.

No, Finland could not join NATO (nor did it even join the European Union until 1995, after the dissolution of the Soviet Union.) Yet even if its choices were constrained by the Muscovite behemoth to the south, at least Finland had a freedom of choice that the Poles, Czechs and Hungarians could only envy during the Cold War.

But is Finland about to abandon neutrality and become America's newest Nordic ally?

Finnish Defense Minister Jussi Niinisto told Reuters on Monday that his nation is negotiating a defense agreement with the United States. Niinisto expects the agreement to be signed by this fall.

Niinisto said the agreement would not include any military obligations for either nation. "It would cover areas where we already work together, like military training, information sharing and research," he told Reuters.

Sweden—also another Scandinavian bastion of neutrality—signed a similar agreement with the United States in June for collaboration on antisubmarine and antiair warfare. Both Finland and Sweden attended a NATO summit meeting in July. Though it's worth pointing out that unlike Finland, Sweden doesn't share a border with Russia, hasn't fought a war with Russia since 1809, and never appeared on any atlas as a part of the Tsarist Empire.

Predictably, Russian President Vladimir Putin responded that if Finland joined NATO, he would move troops to the Finnish-Russian border. "Do you think we will continue to act in the same manner [if Finland joins NATO]? We have withdrawn our troops 1,500 [kilometers from the border]. Do you think they will stay there?" he asked reporters. No, we don't expect Russian troops to stay where they are. We do expect them to move closer to the Finnish border, but not cross it. Grabbing Crimea from Ukraine, or supporting a disgruntled Russian minority in eastern Ukraine, is one thing. Invading or destabilizing Finland is something else.

Which raises the question: why is Finland seeking closer military ties with the West?

The obvious answer is that Finland and Sweden are worried. Russian intervention in Ukraine, Moscow's rumblings toward the Baltic states, and Russian violations of Finnish and Swedish airspace have them on edge.

I contacted Mika Aaltola, who directs the Global Security program at the Finnish Institute of International Affairs. Aaltola says that while Finns "have a deep distrust that formal alliances work," the Finnish government is interested in a bilateral relationship with the United States because of an "acute awareness that national interests match. This is thought to be a very solid basis for a deepening partnership."

From the U.S. perspective, Sweden, and to a lesser extent Finland, are needed to defend the Baltic states from Russia. "What is needed from Finland, is for Finland to be able to stop the Russian use of its airspace and maritime areas to support military incursions into the Baltic," Aaltola says. For the Finns, the incentive for closer ties with the Americans is the need to secure its trade routes. "Finnish arteries are along the Baltic sea," he adds.

However, Aaltola doesn't see this as "so much a step towards NATO, although it might be that Finland will join in five to ten years. It is more a move to consolidate the Finnish position."

Nonetheless, the question still remains as to what Finland will get out of antagonizing Russia. Unlike Finland, America doesn't share an 800-mile-long border with a nuclear-armed and somewhat touchy former superpower. Closer ties with the West haven’t saved Ukraine, and it's debatable whether they'll save the Baltic states. Would the United States or NATO commit aircraft or ships—let alone ground troops—to Finland's defense? And under what circumstances, given that Russia has mastered the art of attacking or threatening its neighbors through means short of outright war? Even Sweden, which sent volunteers and supplies to aid the Finns in the Winter War of 1939–40, never formally went to Finland's defense.

As the Finns learned in the Winter War, the world will denounce aggression while not doing anything about it.