The First 'Invasion' of Texas 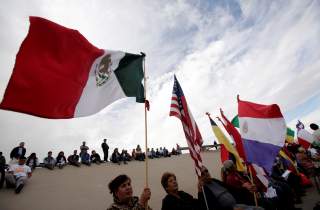 The 1950s were the era of the Hollywood blockbuster, epic quasi-histories that drove millions of Americans to their local cinemas, but just as often broke the bank: Quo Vadis (1951), Julius Caesar (1953), The Ten Commandments (1956), The Bridge on the River Kwai (1957), Ben-Hur (1959) and, at the end of the decade, The Alamo—which was shot in 1959, but released in 1960. The Bridge on the River Kwai and Ben-Hur are now viewed as classics, but for a ten-year-old, nothing matched the sheer spectacle (and patriotic drivel) of John Wayne’s coonskin cap portrayal of Davy Crockett fighting for Texas against the armies of Mexican dictator Antonio Lopez de Santa Anna. I was head-over-heels for the movie, thought about retrieving my discarded coonskin cap in tribute (it was popular when I was five) and would have dubbed the movie “awesome” if the term had then been in use.

Awesome? The Alamo was anything but: reviewers skewered it, John Wayne (its producer, director and major star), lost his shirt financing it, Hollywood ignored it (it won a “Best Sound” Oscar), and two of its history consultants were so disgusted by its inaccuracies that they refused to have their names listed in the credits. They had a point. The Alamo was not located on the Rio Grande River, but much further north; the final battle did not take place during the day, but at dawn; Jim Bowie (played by Richard Widmark) was not bedridden because he was wounded, but because he was sick; Alamo commander William B. Travis (Laurence Harvey), did not die in a sword fight, but from his wounds and John Wayne’s Davy Crockett was caricature of the real man. The real Crockett was a sophisticated land speculator, veteran political infighter, master self-promoter and iconic congressman who told his Tennessee constituents that if they voted him out of office “they might go to hell, and I would go to Texas.” And so in 1835, after losing reelection, that’s exactly what he did.

But it’s the speeches attributed to Crockett that irritate historians: “Republic, I like the sound of the word,” Wayne has Crockett intone. “Means people can live free, talk free, go or come, buy or sell, be drunk or sober—however they choose. Some words give you a feeling. Republic is one of those words that makes me tight in the throat. Same tightness a man gets when his baby takes his first step or his first baby shaves and makes his first sound like a man. Some words give you a feeling that makes your heart warm. Republic is one of those words.” John Wayne’s rendition of Texas history has been fodder for historians ever since (“there was hardly a line of historically accurate dialogue in it,” North Carolina State University’s James Crisp, a celebrated historian of Texas, says), but there’s one thing that Wayne got right: almost all of the  defenders of the Alamo weren’t actually from Texas. They were from somewhere else. Put a different way, and to use a phrase common in the current immigration controversy), the defenders of the Alamo represented the first “invasion” of Texas—and it was an Anglo invasion.

The record is undeniable. The Alamo’s webpage provides a virtual tour of the site (a former Catholic Mission), offers tiny replicas of the fortress, asks for donations for its upkeep, promotes educational materials on the battle and lists all of those who died defending it—which was the entire garrison. There are 189 names in all, though Crisp argues that “there were almost certainly many more, perhaps as many as 280.” But the numbers of those who died, as Crisp notes, is not nearly as interesting as where they came from. While close to half of the garrison was from the American South (including the thirty-two defenders who, like Crockett, were from Tennessee and the fourteen who, like Jim Bowie, were from Kentucky), large contingents also came from New York and Pennsylvania and from even further afield: Ireland, Scotland, England and Germany. “Texas is a place of second chances,” historian Crisp explains. “Have you been to that part of the state? It’s magnificent. The soil is rich, fertile. You can make a go of it. You can make a new start. Crockett needed a new start, and so did Jim Bowie. That’s why they were there.”

These outsiders provided most of the firepower for the Alamo’s defenders, but they weren’t the only ones who defended the mission. So too did a group of Mexican natives who opposed Santa Anna, dreamed of a democratic Mexico, allied themselves with the newly arrived Anglos and, like them, died during the battle. In the list of defenders, their names are followed by a special designation: Spanish/Mexican.

These “Tejanos,” eight of them in all, were from families descended from Mexico’s first settlers, some of whose roots went back centuries. Arguably, given this heritage, these Tejanos might have believed even more deeply in the Texas Revolution than Crockett, or Bowie, or the Alamo’s martinet commander, William Barrett Travis (a womanizer, slave trader, reputed murderer, and sufferer of venereal disease, as one Texas historian described him). After all, while these Mexicans were also looking for a second chance, they were defending the land they were born on. They weren’t from somewhere else.

Painfully, and paradoxically, after the revolution was won (a feat accomplished when Gen. Sam Houston, a former Tennessee governor, defeated Santa Anna and captured him), the Tejano population of Texas was shunned by the new Anglo ruling class, discriminated against by a massive influx (an invasion) of American settlers, and written out of Texas history. This flood of settlers viewed themselves as culturally and morally superior, bringing the fruits of “Anglo Saxon civilization” to the backward and barbarous. The victory at the Alamo, recast as a race war pitting white Americans against brown Mexicans, was celebrated as proof: Crockett and Bowie and Travis had fought valiantly for the new Texas Republic, while the treacherous Tejanos had sat on the sidelines—or worse, collaborated with Santa Anna. “For years the Alamo was used as a hammer against the Tejanos,” historian Crisp says. “This was really ugly, a tragedy. I grew up being taught this. Mexican-Americans were lazy, violent, dirty and illiterate, and the heroic Anglos came in and brought civilization. None of that is true. It was all a lie.”

Sam Houston, the leader of the Texas Revolution, knew it was a lie and fought it. His ally in the fight was Juan Seguin, a Tejanos leader and signer of the Texas Declaration of Independence. “The two were close, there was absolutely no distance between them,” Crisp notes, “even though they came from different backgrounds.” Inevitably, the pressures on Seguin (and a charge of treason leveled against him by his political enemies) forced him to flee to Mexico, where he was coerced into the Mexican Army—proof, his political enemies claimed, of his disloyalty. But Seguin wasn’t the only problem Houston had. Houston’s dream, and the dream of republic’s new settlers, was that Texas (then bound, in the South, by the Neuces River) would become a part of the United States, and include all the land to the Rio Grande, was continually thwart in Congress by those who feared that Texas would enter the Union as a slave state.

“The fight over admitting Texas was never ethnic, it was about slavery,” Douglas Egerton, a professor at Le Moyne College and one of the nation’s leading scholars of (as he describes it), “the intersection between race and politics” in America says. “John Quincy Adams, the former president, led the fight in the Congress. But he had allies. A lot of New Englanders didn’t want to have anything to do with Texas. They were worried about all those new Roman Catholic citizens. They called it ‘popery.’ All that stuff that you hear now about the Hispanic invasion, you never heard back then.” As we now know, the issue was resolved in 1848 when, in the wake of the Mexican-American War, the United States gobbled up California, Nevada, Utah, most of New Mexico, Arizona, Colorado, and the rest of Texas. The United States inherited hundreds of millions of acres of land, millions of native Americans—and untold numbers of Mexicans. It was the largest land grab in American history. The takeaway is irresistible: if you’re worried about the Hispanic invasion, don’t invade Mexico. Or annex Texas. Egerton chuckles: “Well, I’m originally from Arizona,” he says, “and what they say in Arizona is historically accurate: ‘we didn’t cross the border, the border crossed us.’”

Is what is happening at our southern border an invasion? Donald Trump and a large number of his supporters certainly think so. Despite claims from his opponents that the term is a racist trope (“the language of white supremacy,” as Congresswoman Alexandria Ocasio-Cortez described it), Trump defenders view it as a justified response to a national threat: “If you use the term ‘an invasion,’” Fox News pundit Brian Kilmeade says, “that’s not anti-Hispanic. It’s a fact.” Trump’s use of the term has enflamed public opinion, divided Washington’s political class, and (more crucially) appeared prominently in the manifesto of the white supremacist who murdered twenty people in El Paso.