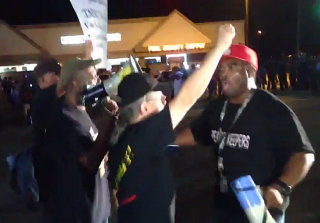 It was a powerful sight: late Monday night, with the midnight curfew approaching and tension building in Ferguson, Missouri, a group of perhaps twenty men moved to the front of the crowd, turned around, linked arms, and walked back through it, pushing it away from the line of police, out of the street and onto the sidewalks. Two smartly-dressed men with megaphones urged the crowd to calm down. It was a close-run thing: a few water bottles had been flung toward the police, and the agitation growing in parts of the crowd had led the police to roll out heavier equipment—and turn on their ear-splitting LRAD sound cannons. The peacemakers were beset on two sides. The police behind the peacemakers were drowning out their megaphones and angering the crowd. And some in the crowd in front of them were trying to stir up tension faster than they could quiet things down. They had megaphones, too—and as the peacemakers tried to clear the streets, these urged the crowd, “Don’t back down!”

This group was not from Ferguson. And this was hardly their first protest. They were members of the Revolutionary Communist Party–USA, a Chicago-based outfit that proclaims its ambition “to thoroughly defeat, dismantle and abolish the capitalist-imperialist state of the USA” by “hasten[ing]...the development of a profound and acute crisis in society and the emergence of a revolutionary people,” which the RCP–USA will lead into a glorious red future. The RCP–USA is loathed by many other American Communist factions for its steadfast refusal to reject Joseph Stalin—saying that he “made errors, even serious errors....But he made those errors in the context of defending a world-shaking revolution aimed at ridding the world of slavery in its modern form...”—and by many other leftist groups for their attempts to provoke violence at otherwise peaceful protests.

That’s what’s happening in Ferguson. Some of the violence has clearly been local in origin, and much of the violence has been senseless and nonideological. Yet RCP–USA agitators trying to sharpen the birth-pangs of the worker’s paradise have been a constant feature. They’ve been caught on camera shouting obscenities at the police, urging citizens to defy police orders, charging forward toward police lines and ignoring the peacemakers, and generally trying to push the crowd toward anger and indiscretion. It’s not clear if they’ve actively engaged in violence, though they have been photographed (see link above) close to people lighting a Molotov cocktail as the police advanced. And the police have too often taken the Reds’ bait.

How do the locals feel about having their town, in its moment of grief and unrest, turned into a staging ground for outsiders trying to kick off a national upheaval? They’ve been complaining for days about the presence of “white anarchists” and other radicals “starting violence and blaming it on ‘us,’” “starting riots while hiding their faces,” and “trying to provoke a fight with police.” And the peacekeepers Monday night had several confrontations with them in front of TV cameras—Antonio French, a city alderman whose heavy social media coverage of the events has seen him shoot to fame, was seen on CNN shoving one of the agitators away from police lines:

French and others filmed several other heated exchanges with the radicals. It’s probably a sign you’ve gone off the deep end when a man wearing a mock police hat and nooses and chains around his neck, a man who was just leading chants of “Black Power,” is telling you off, and when you’re being blasted by the former leader of the New Black Panther Party—itself a thoroughly extreme organization. Indeed, if President Obama is looking for a way to demonstrate leadership in this crisis without entangling himself in its bitter racial divisions, attacking outsiders like the RCP–USA that are using Ferguson’s pain and anger to serve their own violent agendas might be more fruitful than second-guessing local leaders or sending the most controversial member of his Cabinet in for a photo-op.

That there are locals who are willing to fight with police, to break windows and loot businesses, is clear by now. But there are also clearly many people in Ferguson who want the violence to end—from those peacemakers who are risking their safety and their liberty in standing between the police and the crowds, to the ordinary people who come out in the mornings to clean up their neighborhood:

Tony Worthy, 57. "I just wanted to help... Trying to do the right thing." #Ferguson pic.twitter.com/3ck94lFl3K

Phillip Brooks, 47. "The beginning is wonderful. The end is disappointing to the cause." #Fergurson pic.twitter.com/Ztkf1fFlUF

These people surely have a right to be heard, to have peace in a community that has already seen too much violence. Yet for the RCP–USA, as for its forerunners in the long and bloody history of Communism, ordinary people, ordinary towns, are merely the kindling of the revolutionary fire. They’re happy to provide the match, and to remind you that they’re burning down your town for your own good.