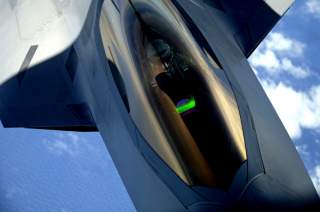 Unlike the other weapons on this list, the B-2 bomber has already attacked Chinese territory--technically. The B-2 has name recognition in China for having mistakenly attacked the Chinese embassy in Belgrade during NATO’s 1999 air campaign against Yugoslavia. Three Chinese citizens were killed and 20 wounded in what the Chinese government called a “barbarian act”. The bombing set back U.S.-Chinese relations and ignited considerable anti-American sentiment in China.

The F-35 Lightning II is America’s next generation fighter-bomber meant to replace existing aircraft such as the F-16, F/A-18C, and A-10. Maligned for being over budget and behind schedule, the F-35 strike fighter has had a rocky development history. Still, if the F-35 does indeed eventually work as advertised it will be a formidable aircraft.

The sheer number of F-35s in service will be problematic for Beijing. Although the U.S. Air Force’s campaign to make every new fighter a fifth generation fighter has been enormously expensive and resulted in an aging fighter fleet, an all-stealth fighter fleet does complicate matters for potential adversaries.

The F-35 will extend China’s stealth problem. In any future conflict, China would already likely see F-22 Raptors based at Kadena Air Base on the island of Okinawa. U.S. Air Force F-16C fighters at Misawa Air Base in northern Japan will likely be replaced with F-35As. The increased range of the F-35 over the F-16 means that fighters from Misawa could theoretically strike the Chinese mainland with standoff weapons. Further complicating the issue for Beijing, some of China’s other potential adversaries, such as Australia, will also be flying F-35s.

All of China’s air defenses, from AEW aircraft to surface to air missiles guarding aircraft carriers to man-portable systems, would have to be optimized against stealth aircraft. Not even the United States is properly prepared for such a threat. While aircraft such as the F-35 are extremely expensive, an all-stealth force does push adversaries to invest in expensive upgrades of their air defenses.

Finally, like the F-22 Raptor, the F-35 has an advanced suite of sensors that add intelligence collection, reconnaissance, and electronic warfare capabilities. The F-35’s AN/AAQ-37 Distributed Aperture System is reportedly capable of tracking ballistic missiles and other targets at ranges exceeding 800 miles, while the APG-81 radar system can map terrain and enemy forces on the ground. These capabilities would be useful not only in wartime, but peacetime as well.

Kyle Mizokami is a writer based in San Francisco who has appeared in The Diplomat, Foreign Policy, War is Boring and The Daily Beast. In 2009 he cofounded the defense and security blog Japan Security Watch. Follow him on Twitter: @KyleMizokami.