Five Axioms to Remember about ISIS and Iraq 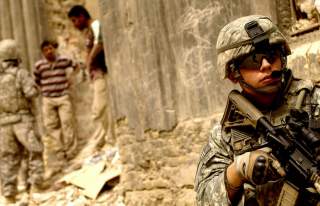 As the militant Sunni group ISIS (Islamic State in Iraq and al-Sham) expands its domains in Iraq and the situation turns from bad to dreadful, many articles on The National Interest online and elsewhere have advised prudence and caution to the United States. “Be careful,” the realists warn, “let Iraq’s neighbors lead” they say. Now that President Obama has decided to send 300 military advisers to train Iraqi forces against ISIS, the axioms below may help Washington retain its influence in the Middle East without getting pulled into another disastrous war.

ISIS: “S” is for Symptom

The sectarian policies of Iraqi Prime Minister Nouri al-Maliki deserve much of the credit for the ISIS blitzkrieg that captured Mosul and Tikrit earlier this month and Fallujah and Ramadi earlier this year. Although Maliki’s Shiite bias had manifested itself before the parliamentary elections of 2010, it became much more pronounced after U.S. forces left Iraq in 2011. Since then, the Maliki government has tried the country’s Sunni vice president, Tareq al-Hashimi, and sentenced him to death in absentia on the dubious charge of “supporting terrorism.” Maliki also went after the Sunni militias that had allied with U.S. forces to expel Al Qaeda from Anbar province during the 2007/8 surge. Overall, Maliki’s State of Law Coalition has acted in a corrupt fashion and ignored popular demands for security and services.

These policies have played into ISIS’s hands. Sectarianism pushed many Sunnis—including former agents of Saddam Hussein’s Baath regime, which the United States had overthrown in 2003—into the arms of the militant group. The corruption and incompetence of the Iraqi state was laid bare during the battle of Mosul on June 9, when 10,000 ISIS fighters expelled a force of about 75,000 Iraqi soldiers, police and paramilitaries. Well equipped but badly led, Iraqi forces saw little point in fighting for a town where the locals saw them as the oppressor anyway.

It says a lot about Maliki’s leadership that he has failed to get the Iraqi parliament to declare a state of emergency after the fall of Mosul; that he has sacked all of his generals above the rank of brigadier ostensibly to revitalize his military; and that he now relies on Shiite militias and Iran to defend his capital.

ISIS, in short, is not so much a problem as it is a symptom. If Iraq is to survive the current crisis as a single political entity (it may not), the solution has to come through an inclusive government representing all religious and ethnic groups.

Iraq Is the New Syria (And Syria Was the Old Iraq)

ISIS came into existence as an Al Qaeda affiliate during the U.S. occupation of Iraq. The group expanded its operations into neighboring Syria as the civil war there escalated in late 2011. Since then, ISIS has captured the oil-rich provinces of Raqqah, Deir ez-Zor, and Hasakah in Syria and has used the spoils to buy more arms and recruit more fighters. For the past seven months, ISIS has been pushing deeper into Mesopotamia from its Syrian bases.

Iraq, then, is only half the problem. Without an end or at least a deescalation of the civil war in Syria, it is unlikely that ISIS can be stamped out of Iraq. At a time when ISIS is expected to launch an offensive against Aleppo, Syria’s largest town, tackling the militant group may require unpalatable options for the United States. That includes working with Syrian President Bashar al-Assad.

Recent events in Iraq have proved once again that Washington cannot go it alone in the Middle East. Especially in Iraq, the United States requires Iranian help. Tehran’s good relations with Iraqi Kurds, the Maliki government, and various Shiite factions make that an imperative need.

But that is easier said than done. To paraphrase Winston Churchill, the only thing worse for the United States than fighting with “frenemies” in Iraq is wrestling domestic opponents and regional allies. Many pundits at home and U.S. allies, such as Israel, would loath the idea of Washington cooperating with Tehran in Iraq. If the Obama administration appears too chummy with the Islamic Republic, it could face backlash at home and from America’s regional allies. If, however, Obama acts on anti-Iran biases and keeps Tehran at arms’ length, it could inflame the situation in Iraq and even undermine the nuclear negotiations between the P5+1 group and Iran, which may result in an agreement by July 20.

That is unacceptable. Resolving the standoff over Iran’s nuclear program and ending the crisis in Iraq are critical to U.S. interests in the Middle East. And Washington working with Tehran to “save” Iraq could have a positive spillover effect on other outstanding issues affecting U.S.-Iranian relations.

…But Understand That They Have Their Own Agendas and Limitations

Notwithstanding the bullish prospects for U.S.-Iranian cooperation, Tehran’s poor standing among Iraq’s Sunni minority limits its value for Washington. Sunnis, the former masters of Iraq, are resentful of Shia domination and that makes them vulnerable to ISIS propaganda. Increased U.S.-Iranian cooperation will not help on that front. Conversely, U.S. collaboration with Saudi Arabia, Qatar or the United Arab Emirates will offend Iran and Iraqi Shiites.

Not that improving collaboration between the Islamic Republic and America’s NATO ally, Turkey, guarantees better results: Ankara and Tehran have both indirectly contributed to the rise of ISIS in Iraq by fanning the flames of civil war in Syria. Even after Iranian President Hassan Rouhani’s visit to Turkey last week, there is no sign that the two regional powers are going to rein in their allies in Syria to help Iraq.

The picture gets even more complicated for Turkey: after capturing Mosul, ISIS overran the Turkish consulate there and took Turkish personnel hostage. With the group reportedly holding another thirty Turkish civilians, the total number of Turks in ISIS captivity exceeds eighty. The government of Prime Minister Recep Tayyip Erdoğan worries about the fate of its captive nationals. On June 15, Deputy Foreign Minister Naci Koru denied that any Turks were held hostage by ISIS and refrained from making any negative statements about the militant group. Since then, the Erdoğan government has imposed a news blackout on Mosul, the fate of the Turkish hostages, and the allegations that ISIS fighters are massacring Iraqi Turkmens.

On top of its problems with ISIS, Ankara has to mesh the aspirations of its Iraqi Kurdish partners, especially their desire to control the contested oil-rich province of Kirkuk, with the anti-Kurdish fears of their Iraqi Turkmen kin.

Iran and Turkey may offer a solution to the crisis. But their complicated agendas and problems in Iraq and Syria limit their value for the United States.

There Is Only So Much You Can Do

For the past few weeks, there has been no shortage of experts sharing their wisdom with President Obama. There’s the perennial “do something, Obama!” chant, most of it coming from the same crowd that had cheered for the disastrous Iraq war in 2002-3. Others admit that going to war in 2003 was wrong, but assert that “we never should have left Iraq.” Thus, writes another, the U.S. should flex its muscle now because it is “our only chance to keep Iraq out of the hands of the Sunni jihadists of ISIS and the Shiite jihadists of Tehran.”

The four axioms above, however, lead to a different conclusion: there is only so much that the United States can do. As stated earlier, the ongoing crisis is a result of Iraq’s political mess, especially its political actors’ inability to resolve their differences.

Part of the U.S. objective during the surge in 2007-8 was to help Iraqi leaders make the tough choices on sharing oil revenues, addressing Sunni grievances (especially reintegrating former Baath members into the system), and disbanding Shia militias. To that end, the Bush administration had deployed 30,000 troops to Iraq, bringing the total number of U.S. forces to 170,000. Iraqi politicians, however, failed to match the security gains with political results.

It is a tall order for the United States to do with 300 military advisers today what 170,000 U.S. troops could not do then. Accordingly, the Obama administration would be better off if it were realistic about Iraq and conveyed that realism to regional partners and global allies: The sources of Iraq’s headaches are sectarianism and poor governance. Until Iraq’s leaders tackle them, U.S.-trained units, together with Shiite militias and Iranian forces can only contain ISIS. And until regional powers work to end the civil war in neighboring Syria (not a foregone conclusion), which has fueled the ISIS war machine, there is no immediate fix for Iraq.

Barın Kayaoğlu is a New York-based writer who is finishing his doctorate in history at the University of Virginia. He was recently a Smith Richardson Foundation fellow in International Security Studies at Yale University. You can follow him on Twitter: @barinkayaoglu.