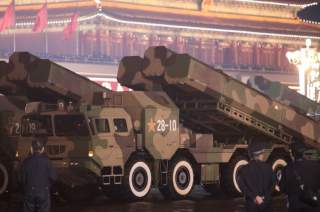 Last week I discussed in these pages five Indian weapons of war China should fear. This week it’s time to turn the tables and lose the Twitter followers I gained after the article’s publication.

As I noted previously, the mountainous terrain on the Chinese-Indian border makes a land war difficult to prosecute and relatively easy to defend. The decisive war would take place at sea as India--sitting astride the shipping lanes providing a significant part of China’s energy--could set up a naval blockade and essentially strangle Beijing’s economy. China would have to sortie the People’s Liberation Army Navy into the Indian Ocean to break the blockade.

That having been said, China has ways to asymmetrically attack India and fight across multiple domains of conflict to entice India to back down. Beijing’s large fleet of conventionally armed ballistic missiles could be used to bombard Indian territory and compel India to a ceasefire. China could even argue that as an Indian blockade harms China’s economy, Indian economic targets, such as factories, refineries, and energy reserves would be fair game. Beijing’s ongoing development of hypersonic weapons will add a new level of complexity to such an attack.

Once again, such analysis is not meant to suggest that war between China and India is likely, or even practical but an understanding of such weapon systems is important. That having been said, let’s take a look at some Chinese weapons that would stand out during such a conflict.

On January 9th China tested a completely new type of weapon, one capable of blistering speeds. The weapon, a WU-14 boost glide hypersonic weapon system, was launched from the Taiyuan Satellite Launch Center in Shanxi province.

Hypersonic weapons were conceived by the Bush administration after 9/11 as a way to strike time-sensitive targets such as terrorist meetings or weapons of mass destruction. Hypersonic weapons travel between Mach 5 and 10, or 3,840 to 7,680 miles an hour. The kinetic energy of object traveling at hypersonic speeds makes a high explosive warhead optional.

American research into hypersonic weapons has spawned Russian, Indian and Chinese development efforts. Before the January 9th test China was known to have a hypersonic program, but little was known about what direction it was taking.

China’s test involved using the so-called “boost glide” method to get to hypersonic speeds. The test likely involved a hypersonic weapon strapped on top of a repurposed DF-21 intermediate range ballistic missile. The weapon was then boosted high into the atmosphere and glided back to Earth at hypersonic speeds. Hypersonic weapons are very difficult to develop, but China’s test was reportedly considered at least a limited success.

India should rightly fear Chinese hypersonic weapons because they are extremely fast and difficult to shoot down. A hypersonic weapon launched from Xinjiang, western China and traveling at Mach 7 could reach Bangalore in twenty minutes, and Delhi in less than ten.

In the event India blockades Chinese shipping from the Indian Ocean, China will have to send a fleet to engage the Indian Navy and break the blockade. At the forefront of such a fleet will be the next generation of Chinese aircraft carriers.

While China already has one carrier as part of its naval arsenal, the rebuilt Liaoning, this could be just the start of things to come. Earlier this month photographs circulated on the Internet of an aircraft carrier model displayed at an official event in Zhongshan. The carrier appears larger than Liaoning. The carrier model appears very similar in length to American aircraft carriers, which would put it at roughly 100,000 tons displacement with an aircraft complement of up to 75.

As War Is Boring recently pointed out, the carrier seems to adhere to the American layout, with an island, angled flight deck, three aircraft elevators, and four, likely electromagnetic aircraft catapults. In addition to fighter aircraft and helicopters the model has what appears to be China’s version of the E-2D Hawkeye airborne early warning aircraft.

An article cited in The Diplomat last week asserts that China is aiming for an additional three carriers, each having an overall length of 1,049 feet and displacing 85,000 tons. The carriers would have an air complement of 50 planes, eventually including 25-27 J-20 fifth generation fighters. The original Straits Times article (which The Diplomat recommends taking with a grain of salt), estimates the first new carrier is three years from completion.

Whatever the details, it appears inevitable that China will shortly begin building a carrier force. The construction of a future Chinese carrier fleet opens up the possibility of a direct confrontation with India’s carrier fleet, in the first carrier vs. carrier battle since the Second World War.

The Second Artillery Corps is a major command of the PLA responsible for ballistic missiles, both nuclear and non-nuclear. In the event of war, the Second Artillery could use its prodigious supply of conventionally armed missiles to strike targets across India.

China has several short and medium range ballistic missiles capable of mounting conventional warheads. The DF-15C is a medium-ranged ballistic missile with a range of 500 to 620 miles. From major roads in Tibet, a DF-15C could hit targets as far as Lucknow and, with inertial and terminal guidance systems, would be accurate enough to target military and transportation facilities. The DF-15 series of missiles was first fielded in the late 1980s, and carries a 2,100 high explosive warhead.

The DF-21C medium ranged missile is the conventionally armed member of the DF-21 family. It has a longer range of 1,087 miles, and from similarly positioned launching sites could range over the northern half of India as far south as Mumbai. First fielded in 1996, the DF-21C has a 1,300-pound “bunker buster” deep-penetrating warhead and terminal guidance for increased accuracy.

India should fear the missiles of the Second Artillery Corps because it has no air defense network in place to shoot down ballistic missiles. The Indian anti-ballistic missile system is in development but still years from deployment. In the event of war, DF-15C missiles could be used against soft targets near the border such as airfields, radar sites, and military bases, while DF-21C missiles could be used to strike deeper within India’s interior against hardened command and control facilities. They would be, at least for now, unstoppable.

The Chinese Dong Hai-10, or “East Sea 10” cruise missile family represents a breakthrough in Chinese cruise missile technology. The Chinese have intentionally kept a lid of secrecy and likely spread misinformation regarding indigenous cruise missile development, leading one influential think tank to describe the DH-10 as “the assassin under the radar.” The DongHai-10, or “East Sea 10” has been under development for decades, and may have benefitted from recovered Tomahawk missile technology.

Indeed, the DH-10 is thought to bear a strong resemblance to the American Tomahawk cruise missile with a bulb nose, a pair of stubby wings, and a turbojet engine. The U.S. Department of Defense estimates the DH-10’s range to be approximately 941 miles, about as far as the latest version of the Tomahawk, Block IV-E. The DH-10 is thought to rely on several navigation systems, inertial, terrain contour matching, and satellite navigation. Warhead size is probably somewhere within 1,000 pounds. The latest version of the DH-10, the DH-10A (sometimes referred to as the CJ-10), is estimated to be accurate to less than ten meters.

Like the U.S. Tomahawk, these weapons are designed to be launched from land, air and sea. The ground version is launched from a wheeled transporter carrying three missiles at a time. According to the Project 2049 Institute, the PLA has formed “at least two operational, road-mobile, DH-10 brigades”: the 821 Brigade in Liuzhou, Gungxi Province, and the 824 Brigade in Dongkou, Hunan Province. These brigades are thought to cover an arc from Taiwan to the South China Sea, and from those locations could only reach as far as West Bengal. Move those brigades west by road to Yunnan province however, and they could reach as far as Jaipur. DH-10 missiles deployed into Tibet could reach the northernmost two-thirds of India, reaching as far as Hyderabad. China is estimated to have 45-55 ground launchers for the DH-10 and 200 to 500 missiles.

These fearsome cruise missiles can also be carried by the H-6K strategic bomber, which is capable of carrying missiles. Finally the Type 052D destroyer, the most current of the Type 052 air warfare destroyers, can carry the DH-10 in vertical launch silos.

India should fear the DH-10--particularly the ground-launched version--because it provides China with a standoff conventional precision attack capability. India’s only defense would be to shoot incoming DH-10s down. The Indian Army could not capture enough Chinese territory to push the DH-10 launchers out of range, and Chinese air defenses would be much too thick to actively hunt road-bound cruise missile launchers in Chinese airspace.