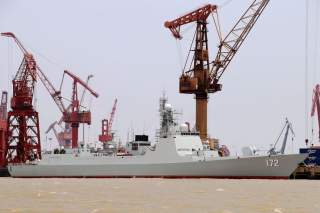 It has become conventional wisdom when referring to the current state of ties between Taipei and Beijing to offer something similar to the following: “cross-Strait Relations have significantly improved under the administration of President Ma Ying-jeou.” While such a, statement is not totally unjustified, security-minded observers would opine that the Taiwan Strait remains highly militarized, and that Ma’s rapprochement has not stopped Beijing from deploying more—and increasingly sophisticated—weapons pointed at Taiwan. And no mid-level-official-branded-high-level meeting is going to change that.

In many ways, Taiwan shares similar challenges currently faced by U.S. forces in the Western Pacific. Therefore, do platforms that you can see on a recent list by Kyle Mizokami, “Five Chinese Weapons of War America Should Fear”, apply to Taiwan as well? Not necessarily. The DF-21D, the world’s first anti-ship ballistic missile or ASBM, is specifically designed to counter U.S. Navy carrier groups. The PLA and its air and naval branches will have other means at its disposal to deal with the Taiwanese navy in a more symmetrical manner. The J-20, China’s first 5th generation fighter—which is still in development—could hypothetically be deployed against Taiwan but it is more likely that Chinese planners would leave J-20s to deal with U.S. F-22s and U.S./Japanese F-35s, should they come to Taipei’s defense. On the other side, offensive cyber operations and new Chinese landing ships are of course very relevant to Taiwan. Bearing all that in mind, the purpose of this piece is to present major combat platforms that would either play a significant part in a full-scale attack on Taiwan or those against which Taipei does not have an adequate counterpart.

So what weapons are at Beijing’s disposal for a possible Taiwan contingency? Now without further ado, the four Chinese weapons of war Taiwan should fear:

The number of missiles pointed at Taiwan has become embedded in the consciousness of the Taiwanese population.  In fact, it is fairly likely that if you happen to be involved in a conversation with a street vendor in one of the plentiful night markets, they could very well know an approximation of the number of short- and mid-range ballistic missiles that have been deployed across the Taiwan Strait. Numbers by experts vary, but most estimates place the number of short and mid-range ballistic missiles at around 1,600 or more.

The PLA is also acquiring various types of Land Attack Cruise Missiles (LACM) and Anti-Ship Cruise Missiles (ASCM), which can be launched from various platforms and domains (land, sea and air). This gives China greater ability to attack key infrastructure and military targets from different angles with the added advantage of launching saturation strikes that would stretch Taiwan’s limited missile defense capability beyond its limits.

The Russian S-300—which China has purchased and refined in the HQ family of systems—are generally considered among the best one can get for securing a nation’s air space. However, barring a suicidal attack inside Chinese territory, why should Taiwanese pilots be afraid of this sophisticated air-defense system? Well, the tyranny of Taiwan’s geography could erase any differences between offensive and defensive systems. The situation may get even worse with the much rumored purchase of the more advanced S-400 with a range of 400km.Virtually all of Taiwan would be within the range of the S-400, although Taiwanese bases on the east coast enjoy some protection thanks to Taiwan’s mountain ranges. Therefore, defensive systems could turn offensive as any plane taking off from air bases in western Taiwan would become a target once reaching altitude of approximately 20,000 feet, forcing Taiwanese pilots to either fly low or expose themselves to deadly fire.

Submarines have to make it on the list, partly because Taiwan only has two combat capable submarines and the acquisition of new boats is nowhere on the horizon. Yet that is not the only reason why Taiwan should be concerned. The Chinese ‘silent service’ could play a role in missions such as a maritime blockade of Taiwan, as well as conducting operations against Taiwanese surface vessels under full-out war conditions.

Taiwan’s navy is generally no underdog, yet its major disadvantage is that it has to cope with a growing and highly capable Chinese navy. The PLAN has benefited greatly from a rapid modernization program. One of the newest PLAN acquisitions is the Type 052D guided-missile destroyer. Similar to submarines, the Type 052D would play a role in any blockade scenario, as well as any full-scale attack. Missions would include destruction of Taiwanese surface combatants and offensive anti-air operations against Taiwan’s air force, complementing the threat posed by advances in Chinese air-defense systems.

Needless to say, there are other items in China’s arsenal that could challenge Taiwan’s defences and cause serious headaches in a wartime scenario. The modernization of China’s armed forces has been impressive both in terms of quantity and quality. That being said, Taiwan need not despair, as its geographic setting would pose significant challenges for any PLA military operation that would attempt in seizing the island. Ultimately, the PLA would have to cross the treacherous Taiwan Strait and therein lies Taipei’s advantage. To successfully stage an amphibious invasion in the age of high-precision strike has become more difficult, not easier than 70 years ago.

Michal Thim is a Ph.D. candidate in the Taiwan Studies Program at the China Policy Institute (CPI), University of Nottingham, Contributing Analyst for Wikistrat, and a Research Fellow at the Prague-based think-tank Association for International Affairs. Michal tweets @michalthim.