Five Lessons Learned From Sanctions on Iran for the Ukraine Crisis 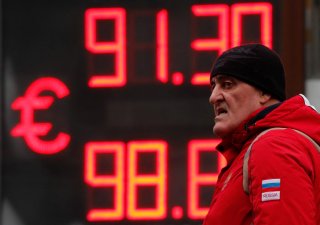 Given how far U.S. adversaries are willing to go to bust sanctions, creativity should be treated as an element of national power and more welcome in the debate over enforcement measures. Bold actions, such as the seizure of Iranian tankers and forfeiture of their illicit oil cargos were a late but powerful component of the U.S. sanctions strategy against Iran. The further the United States is willing to go to enforce its penalties, the greater the transaction cost for the target state to continue its countermeasures. Psychologically, such moves signal that enforcement can be just as flexible and innovative as circumvention, thus aiming to deter future evasion efforts.

All else equal, the fourth lesson from the Iran experience is that multilateral sanctions are not necessarily more effective than unilateral ones. While this lesson does not aim to downplay the political and diplomatic costs of unilateralism and seemingly occasional irreverence for diplomacy out of Washington, it does aim to right-size such concerns given the risk-aversion of most large multinational enterprises and banks, the growth and importance of the compliance sector, the increasing use of U.S. sanctions, the position of the dollar as the world’s reserve currency, and other factors highlighting the outsized influence of the United States in the global financial system. While multilateral sanctions regimes can be treated as coalitions based around a “price-floor” interpretation of a perceived threat and what to do about it, reaching this consensus through international organizations like the UN Security Council or bilaterally with the European Union can be a lengthy and complex process that waters down sanctions and buy time for the adversary.

In the case of Iran, the unilateral sanctions imposed by the Trump administration were not less effective than the multilateral sanctions signed into law or imposed by President Barack Obama, which followed several rounds of UNSC sanctions. In fact, the takeaway for the 2018-2020 experience is that unilateral sanctions could be just as effective, if not more effective, and in record time. This is despite the skepticism of many U.S. policymakers and sanctions practitioners, as well as the efforts of the European Union to bypass U.S. sanctions. European governments went so far as to create a Special Purpose Vehicle for such trade, to no avail. When push came to shove, European banks and businesses broadly complied with U.S. sanctions regulations much to the chagrin and policy views of their own national governments.

In the case of Russia, European resistance against sanctioning Moscow had been stronger and better organized. But with Putin’s war continuing, considerable cracks have formed, and some European nations are reversing course by offering military aid, pausing contracts, and supporting sanctions. Rather than hide behind early European foot-dragging, as some former administration officials have criticized, now is the time for the Biden administration to lead on sanctions efforts, taking a page from the U.S. playbook on Iran and SWIFT from 2018.

There are reportedly even areas where Washington may be able to offset the political cost of any unilateral economic measures by supporting multilateral diplomatic measures that some of its allies already have underway. One example is the Canadian and European decision to close their airspace to Russian planes. As time passes and if Russia’s military operations succeed, as a result of geographical proximity, energy dependence, and pressure from varied economic interest groups, European countries may be more inclined to pump the brakes on sanctioning Russia. It is crucial for Washington to remember that should these governments pull a U-turn, it can still influence the behavior of European companies despite the directives of their governments.

Last but not least, is a bureaucratic lesson. Given the centrality of sanctions to U.S. national security, it is imperative that Washington work to support and expand its financial warfare capabilities to include fully staffing and funding elements in the Department of the Treasury including but not limited to the Office of Terrorism and Financial Intelligence. By way of example, the enacted budget for that office in fiscal year 2021 was $175 million, a figure dwarfed by the country’s $777 billion military budget. As Washington’s reliance on sanctions and related tools expands, its economic warfare headquarters should similarly expand and modernize to make sure the programs they oversee are fully serviced. Sanctions can never replace the U.S. military’s function in deterring foreign adversaries or the State Department in supporting diplomatic efforts, but they are an important, in-demand, and multipurpose foreign policy tool which complements other sources of American power.

To be clear, sanctions alone are unlikely to fully resolve the Ukraine crisis. But this does not imply a vindication of the argument made by sanctions skeptics in the Iranian, Russian, or broader contexts. At present, the goal of sanctions should be to impose costs on the Russian economy that either make Putin’s tactical and strategic objectives too costly to achieve, change Russia’s overall cost/benefit calculation, weaken its economy, and deter further aggression. These sanctions can support, not replace, broader American policy goals related to countering Russia, supporting NATO, as well as send a message to a wide range of actors about American resolve and economic power.

Not holding back on enforcement of sanctions against the Central Bank, pushing for a full removal of Russian financial institutions from SWIFT, imposing blanket sanctions on Russia’s key economic sectors, and exploring ways to deal with cutting off the Russian energy trade are likely to be the most effective coercive and punitive tools Washington has in its arsenal of economic statecraft that need not wait for a new multilateral consensus. The Iran case has proved at least that.

Saeed Ghasseminejad is a Senior Advisor at the Foundation for Defense of Democracies (FDD) where Behnam Ben Taleblu is a Senior Fellow. They both contribute to FDD’s Iran Program, Center on Economic and Financial Power (CEFP), and Center on Military and Political Power (CMPP). The views expressed are their own.