5 North Korean Weapons South Korea (and the World) Should Fear 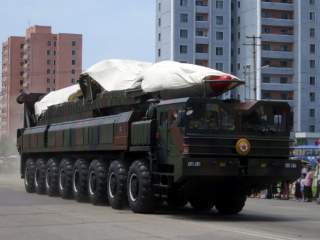 North Korea is a poor, dilapidated country. It is also the world’s most repressive, heavily armed nation, routinely practices diplomacy through spontaneous violence, kidnaps citizens of other nations, regularly threatens war and is technically still at war with the United States.

Nuclear weapons, for example, guarantee the survival of the regime but are not useful for much else. The Korean People’s Army tank fleet is good for reuniting the peninsula in a war, but isn’t much of a strategic deterrent, nor is it useful for provocation. North Korea’s gunboats are worthless in any situation except for a provocation at sea.

All are very concerning. Let’s take a look at the North Korean weapons South Korea fears most:

North Korea’s first nuclear test was in 2006 and was assessed by the U.S. intelligence community as having a yield of less than 1,000 tons TNT. (The Hiroshima bomb, for example, is estimated at 18,000-ton high-explosive yield, or 18 kilotons.) The yield was so small that the test was widely regarded to have been a failure.

A second test in 2009 was of a slightly larger yield and also considered a failure. A third test in 2013 is estimated to have had a yield of 6-40 kilotons and was considered a success.

The actual number of weapons North Korea has is unknown, but on June 16, the Stockholm International Peace Research Institute announced it believed the country maintained a stockpile of 6-8 weapons.

North Korea is currently thought to lack the technology to place a nuclear weapon on an ICBM capable of hitting the United States. However, the Institute for Science and International Security assesses North Korea as likely being able to place a nuclear weapon on a Nodong missile. A road-mobile missile with a range of 1,300 kilometers, Nodong has enough range to hit all of Korea, all of Japan except for Hokkaido, and even Beijing.

Alternately, a North Korean nuclear weapon could be placed in a tunnel underneath South Korea, of which there are many, or an An-2 transport aircraft, or even smuggled into South Korean waters aboard a submarine or disguised fishing trawler.

South Korea fears Northern nuclear weapons not only because of their enormous destructive power, but because they make the regime more difficult to remove. They also make any sort of internally generated instability in North Korea more dangerous, because nukes could slip away from the relatively secure hands of the North Korean government into a rogue faction intent on using them.

North Korea’s midget submarines, of which it has several dozen, fall under the category of provocation weapons. Provocation weapons are actually used by the regime in violent incidents and are designed to draw attention to the regime during peacetime, while minimizing the potential for escalation.

A classic example of this was the sinking of the South Korean corvette Cheonan in 2010, in which 46 South Korean sailors were killed. While no submarine was ever detected at the scene, a Sang-O and a Yono class midget submarine were thought to be in the area prior to the attack. Debris retrieved from the site indicated the weapon used was a North Korean CHT-02D heavyweight acoustic/wake homing torpedo.

Up to 40 Sang-O class midget submarines have been produced. The Sang-O class displaces 325 tons submerged, is equipped with four torpedo tubes, and can carry up to 16 mines. A lengthened version, the K-300, was identified in 2011.

Some Sang-O class submarines are unarmed infiltration models designed to ferry North Korean spies and special forces. In 1996, a Sang-O submarine ran aground at Gangneung, South Korea while recovering a team of spies sent to reconnoiter a naval base. Of the 25-man crew, 11 were executed by other members of the crew, 13 were killed in shootouts with South Korean forces, and one was never found.

North Korea also operates up to 10 midget submarines of the Yono class. 130 tons submerged and featuring two torpedo tubes, they are the smallest submarines in North Korea’s arsenal capable of launching torpedoes.

Most would consider midget submarines a relatively low threat, but South Korea fears the North’s submarines, because they could be used to ambush South Korean ships.

North Korea has a prodigious amount of artillery, especially long-range artillery pieces. One of the major concerns about a North-South war is that the North would be able to unleash a devastating artillery barrage on the South Korean capital of Seoul. Such an attack, by thousands of artillery pieces on a population of 24,000,000 is widely believed to be capable of killing hundreds of thousands of civilians and “flattening” Seoul in the span of half an hour. The two most dangerous artillery pieces in such a scenario are the 170mm KOKSAN howitzers and MRL-240 rocket launchers.

The 170mm KOKSAN heavy self-propelled howitzer has two variants, differing only in chassis type and the ability to store ammunition onboard. The 170mm gun has a range of 37 miles, and can fire an initial burst of four rounds in one minute, then a sustained rate of one round every three minutes. The KOKSAN guns will fire from protected firing areas, driving into caves to reload. North Korea is believed to have up to 500 KOKSAN guns.

Next is the MRL 240 multiple rocket launcher. MRL 240s come in two variants, one with 12 tubes and another with 22. The rockets have a diameter of 240mm, and a range of 21 miles. Both variants are truck-mounted and fire from areas adjacent to underground bunkers. A MRL-240 can empty its rocket tubes, return to the bunker, reload and drive back to the firing position in about fifteen minutes. The North is assessed to have around 200 MRL 240s.

But is the “artillery apocalypse” scenario credible? A critical analysis by the Nautilus Institute concludes it is probably not. North Korea would face a variety of problems in such a situation, including combat attrition and supply constraints. Most, if not all North Korean artillery pieces would be needed to support a ground offensive. Also, such an attack would risk killing thousands of Chinese citizens, many of whom are the children of party officials attending school in Seoul. Ultimately, Nautilus assessed a realistic casualty rate of 30,000 civilians, a tragic figure but nowhere near a million or more projected by the scenario.

Regardless of whether the scenario is credible or not, South Korea would rightfully fear the heavy guns and rockets of North Korea and the sheer panic they would cause. In wartime, Northern artillery would almost certainly kill thousands of South Koreans, civilian or military.

North Korea has built a large fleet of short- and medium-range ballistic missiles. Although relatively primitive by modern standards, the missiles still represent a substantial threat. Newer short-range ballistic missiles promise to be much more accurate. The missiles at this point probably only have high explosive or chemical warheads, and would be useful bombarding political targets, airbases, and infrastructure targets. Having already described the medium-range Nodong missile, let’s look at short-range systems.

The Hwasong-5/6 series of short-range ballistic missiles are descendants of the Soviet Scud missiles. Both are liquid-fueled missiles that are transported and launched from wheeled carrier vehicles. Hwasong-5 was developed in the early 1980s, has a range of 200 miles and carries a 2,200-pound warhead. Hwasong-6 has a range of 310 miles and a slightly smaller 1,800-pound warhead. Hwasong-5 could probably land half of its warheads within 450 meters of the intended target. Hwasong-6 is allegedly much more accurate, to 50 meters. There are an estimated 300 to 600 Hwasong missiles currently in North Korea’s inventory.

A more advanced short-ranged missile system, the KN-2 Toksa, is based upon copies of the Soviet SS-21 missile system acquired from Syria. The Toksa is a mobile system, carried on wheeled transporter-launchers. The missiles have a relatively short range of 74 to 86 miles. They are solid fueled, meaning they can be deployed and launched without fueling first. The KN-2 has a payload at least comparable to the SS-21, which would be about 1,063 pounds. If the SS-21’s accuracy has not been improved, the KN-2 is probably accurate to within 120 meters.