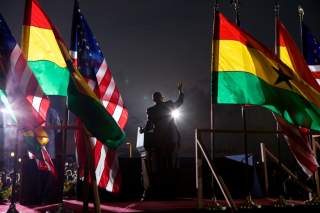 Earlier this month, President Barack Obama convened nearly fifty African heads of state in Washington, DC for the first ever U.S.-Africa Leaders Summit. As the largest event ever held between a U.S. president and African heads of state, the summit was the most visible expression of the Obama administration’s efforts to reengage Africa, which began with the president’s trip to the continent in the summer of 2013.

This “pivot” to Africa is being driven in no small part by a desire to counter China’s growing influence on the continent. Indeed, President Obama nearly said as much himself. While claiming that Africa was big enough for more than one global power, the president and senior administration officials repeatedly sought to draw a distinction between the United States’ and China’s engagement with Africa. Without naming China specifically, President Obama said at the summit:

We don’t look to Africa simply for its natural resources; we recognize Africa for its greatest resource, which is its people and its talents and their potential. We don’t simply want to extract minerals from the ground for our growth; we want to build genuine partnerships that create jobs and opportunity for all our peoples and that unleash the next era of African growth. That’s the kind of partnership America offers.

The administration’s efforts to reengage Africa are well founded, especially with the growing opportunities in parts of the region such as Sub-Saharan Africa. Still, there are at least five reasons why the United States can’t beat China in Africa.

The first reason why the United States can’t beat China in Africa is because it is starting from too far behind. Although China only surpassed the United States in trade with Africa in 2009, it has quickly established a sizeable lead. Last year, America’s trade with Africa stood at just $85 billion. By contrast, China’s trade with the region stood at $200 billion. Similarly, while less than 1 percent of America’s foreign direct investment went to Africa last year, at least 3.4 percent of China’s direct FDI went to the region (and much of China’s FDI goes unreported).

Political ties between China and Africa are nearly as advanced. Since 2000, China and Africa have held the Forum on China-Africa Cooperation (FOCAC) every three years. There is no regular forum even remotely similar between the United States and Africa, and this month’s one-time summit cannot replace an established forum. Nor is senior-level engagement between Beijing and Africa limited to the FOCAC. In the same month that Xi Jinping assumed the Chinese presidency, he visited three African nations as part of his first visit abroad. With the exception of a brief stop off in Ghana, President Obama didn’t even visit the continent until halfway through his second term. Similarly, while Vice President Joe Biden has yet to visit Africa while in office, Chinese premier Li Keqiang visited Nigeria, Angola and Kenya just over a year after taking up his current office. As a nice touch, Premier Li made his week long Africa visit the first official trip he took with his wife.

Another reason that the United States can’t beat China in Africa is because Beijing has expanding interests in the region. Specifically, China sees Africa as essential to securing its growing appetite for natural resources, and also hopes to increase its exports of finished goods to the region. Most notably among these, Africa is crucial to Beijing’s efforts to reduce its reliance on Middle Eastern oil. In recent years, China has relied on Africa for as much as one-third of its imported oil. If China’s economy keeps growing at a reasonable rate, the amount of oil that Beijing imports from Africa will continue expanding.

All signs suggest that Chinese leaders are busy preparing for this future. During his trip earlier this year, Premier Li promised to double bilateral trade with Africa to $400 billion by 2020. Li also said China planned to quadruple its direct investment in Africa to $100 billion during the same time (and again, much of China’s FDI in Africa goes unreported). Given that the United States already lags far behind China in many of these indicators, it will have to accelerate its engagement at an even faster rate. For example, U.S. trade with Africa would have to more than quadruple over the next six years.

America has a declining interest in Africa. Despite chiding China for being only interested in Africa for its oil and natural resources, America’s interests in the region are largely the same. According to the Congressional Research Service, around 60 percent of U.S. imports from Africa are in oil. Other estimates suggest that more than 75 percent of U.S. imports from the region are made up of natural resources.

Even with the growing economic opportunities in the Sub-Saharan, this fact alone suggests that U.S.-African trade is likely to decline in the coming years. That indeed has been the trend of the last few years. As noted above, last year, America’s bilateral trade with Africa was $85 billion. That was down substantially from $125 billion in 2011. Trade with Africa is on course to further decrease this year, with the first five months of 2014 producing just $31 billion in trade. In other words, America’s chances of quadrupling trade with Africa by 2020 hover just around none.

The fourth reason that the United States can’t beat China in Africa is that the game is rigged. That is, Chinese businesses possess a number of distinct advantages over their American counterparts in the African marketplace.

Most important among these is the strong support they receive from the Chinese government. Because of the strategic nature of China’s economic interests in Africa, Beijing is willing to provide substantial backing to the (largely state-owned) Chinese businesses operating in Africa. As a result, these companies can often pay above market prices for African goods, something American businesses don’t have the luxury to afford. Similarly, Chinese businesses are often willing to invest in high-risk ventures, as well as operate in far more risky environments than their Western counterparts.

Along with the prestige projects the Chinese government is willing to fund, Chinese companies in Africa are also able to offer the bribes that are usually crucial to securing large contracts in the region. By contrast, American companies are prohibited from engaging in these practices by the Foreign Corrupt Practices Act. Finally, because of their country’s own recent development, Chinese businesses (and bureaucrats) are usually more cognizant of Africa’s economic needs than are American ones.

Stronger political engagement from the United States would not be enough to overcome these inherent economic disadvantages. Nonetheless, any increased engagement with Africa is likely to be limited—if it happens at all. For one thing, U.S. foreign policy suffers from an acute case of Attention Deficit Hyperactivity Disorder (ADHD), and America’s transient interest in Africa (for example, one of highly publicized leadership summits) has been one of the prime symptoms of this.

There’s no reason to expect this to change in the coming years. Indeed, American diplomatic bandwidth is more than tied up elsewhere in the world. To begin with, the United States remains obsessed with the Middle East and terrorism. As its most recent intervention in Iraq demonstrates, no matter how hard a U.S. president tries to get the country out of the Middle East, the region pulls America back in. Given the amount of instability the region is likely to encounter in the years and decades ahead, there’s little chance America’s obsession will come to pass.

Nor is the Middle East alone in hogging U.S. attention. Russia’s recent misadventures in Ukraine have sparked a renewed interest in Washington in a pivot to Europe. In fact, senior defense leaders—including Gen. Philip Breedlove, Supreme Allied Commander Europe and chief of the U.S. European Command—are already indicating they’ll send more troops to the European theatre in the coming years.

If Secretary John Kerry’s public schedule is any guide, the amount of diplomatic attention Europe receives is also set to increase. It will also far outpace the attention Africa receives. Last year, the extent of Kerry’s time in Africa was limited to a day and a half in Ethiopia. Even that was a quick detour on a trip that was largely spent in the Middle East and Europe. So far this year, Kerry has spent a week in Africa visiting five different nations, and made quick stop offs in Morocco and Algeria on the tail end of a Europe trip, and Tunisia at the tail end of an Asia-Middle East trip. By contrast, this year alone, Kerry has made fourteen trips to Europe, visiting eleven different countries and the Holy See. Indeed, he has visited France six times alone, spending far more time in Paris than in all of Africa.