A Five-Step Plan to Destroy the Islamic State 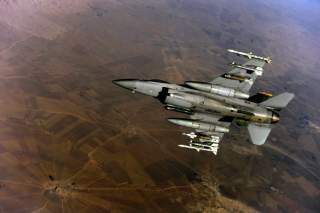 More so than encompassing narratives, such as Pan-Arabism and Islamism, local identities have gained in recent years in the Middle East, politicizing and militarizing the conflict between Shiites and Sunnis in Syria and Iraq. These trends have created an opening for the Islamic State (IS), which has morphed into a large, difficult and complex challenge.

The U.S. intervention to date has produced important gains. Although the city of Sinjar taken from Kurdish forces remains under IS control, humanitarian aid has reached the beleaguered Yazidi population on Mount Sinjar. Kurdish morale has been shored up, helping Kurdish forces to recover most of the areas briefly lost to IS in Gwer, Makhmour and the Mosul Dam, while preventing the group from advancing toward the Kurdish capital of Erbil.

However, the terrorist network is far from being defeated. IS has become the world’s most powerful quasistate and internationally networked extremist entity. This terrorist network is in the process of establishing a state called the Khalifat. Limited U.S. actions taken up to now are unlikely to be sufficient even to contain the threat from IS—that is, preventing IS from expanding beyond the large areas across Iraq and Syria that it currently controls—much less to defeat the network and eliminate its sanctuaries.

IS retains support from key power centers, such as tribes and former Baath military officers. After capturing immense financial resources, oilfields and military equipment from deserted Iraqi forces, IS is earning over $1 million in revenues per day. Since the U.S. strikes began, IS has taken over Jalula from the Kurds and is currently focused on the Iraqi town of Qaim on the Syrian border. The fall of Qaim would set the stage for an IS capture of Haditha—a vital link between the Tigris and Euphrates valleys, and home to Iraq’s second-largest dam—and eventually, the provincial capital in Ramadi. Losing Haditha and Ramadi would mean that the whole of Anbar province would come under IS control, leaving anti-IS Sunni tribes without major strongholds.

Defeating IS is important. But achieving it will take time and calls for a long-term humanitarian, political and military strategy, including addressing the underlying sources of Sunni discontent. IS takes advantage of Sunnis’ discontent and promises to return them to a dominant position. It has embraced the concept of Khalifat as the right form of government for Muslims. In the history of Islam, the Khalifat period marked a period in which Sunnis were dominant. IS hopes that the Khalifat can stand as a model of Sunni government and a rival to the Shiite Vilayati-faqih in Iran.

There is considerable discontent among Sunnis in Iraq and Syria, Sunnis have found themselves on the losing end of Shiite-dominated governments. Nouri al-Maliki alienated Sunnis and Kurds alike, while Bashar al-Assad ignored and even supported IS operations against the nationalist Syrian opposition. Millions of Sunni internally displaced persons and refugees are now living in squalid conditions in Jordan, Lebanon, Turkey and beyond. As a result, opposition to Shiism is the key ideological underpinning of IS.

IS is the successor of Al Qaeda in Iraq (AQI). In the Sunni areas of Iraq, disaffected tribes and other local leaders supported AQI before turning against the network in 2006. By 2008, AQI reached a state of near-destruction due to three main factors: widespread outrage at AQI’s maltreatment of the local population; U.S. outreach to the Sunnis through political, financial and security support; and a commitment by Iraq’s central government to respond fairly to the Sunni community’s aspirations.

Moderate and nationalist Sunnis, however, lost ground to IS amid the total U.S. withdrawal from Iraq and the unraveling of Syria. Without the restraining influence of the United States, Maliki moved to snub and persecute Sunnis. And in the absence of support from the international community in the face of Assad’s brutal tactics, disaffected Sunni Arabs—even those who do not necessarily embrace its neo-Salafist ideology and intolerance towards Christians and Yazidis—embraced IS as the answer to Shiite repression.

The Obama administration has not clarified whether the objective of U.S. policy is to defeat IS or merely to contain the network. Containment would involve a more limited U.S. humanitarian, political and military effort. But it would present risks similar to those that the United States assumed during the 1990s when it opted for a policy of containment and coercive diplomacy against the Taliban–Al Qaeda nexus. A more ambitious strategy now could avoid greater risks over the long term.

Defeating IS would involve a long-term, comprehensive strategy consisting of the following five steps:

The humanitarian catastrophe resulting from the conflicts in Iraq and Syria requires a massive response. This is essential strategically. Friendly countries who host large number of refugees, such as Jordan and the Kurdish region of Iraq are at risk of destabilization. For displaced Sunni Arabs, poor refugee conditions can lead to radicalization and opportunities for IS to recruit them. If we allow IS to exploit this opportunity, the threat could expand exponentially.

Moreover, IS is seeking to establish itself as a quasistate, providing humanitarian aid and services in areas it controls. The international community and its local partners must compete for the hearts and minds among refugees and communities seeking protection from or willing to align against IS. This competition will be waged in part in the provision of humanitarian relief and basic services. It is a competition that we must win.

This effort also should be used as an instrument for expanding the coalition of countries working to defeat IS. While some governments may join us in military actions, many more will be willing to participate on the humanitarian side. The United States should mobilize a coalition of donors on the scale of the effort to support the first Gulf War financially. It could set the stage for a major effort that would continue beyond the defeat of IS to promote economic growth and development in the region along the lines of the Marshall Plan in postwar Europe.

Catalyze Settlements to Unify Anti-IS Groups in Iraq and Syria:

The Obama administration has signaled that it will accelerate efforts against IS once a unity government is formed in Baghdad. The administration is right to use military support—including material for the Iraqi military and moderate Sunni forces, and air attacks against IS—as leverage in encouraging Shiite political leaders to share power and resources with Sunnis and Kurds. Sunni participation in the fight against IS is vital, but Sunnis forces are unlikely to take up arms against IS without sufficient political concessions.

Even in the face of an existential threat from IS, it will be difficult for Iraq’s political parties to agree to meaningful power- and resource-sharing. Iraq’s prime minister designate Haider al-Abadi—the descendent of an old Baghdadi family and a London-based exile during the reign of Saddam Hussein—may be more open-minded than his fellow Dawa-party predecessor al-Maliki. But Abadi represents the same ideological and Islamist part of Iraq’s political spectrum and must be responsive to his predominantly Shiite constituency in pursuing any compromise that satisfies Kurdish and Sunni demands.

The goal for many Sunni political leaders is a detailed agreement—not a statement of principles—entailing an end to de-Baathification, release of prisoners, decentralization of security responsibility and devolution of authority. This would allow Sunni provinces to form federal regions with their own local security forces.

The United States should immediately engage with Sunni political leaders, not only to help formulate the needed political settlement, but also to bring moderate Sunni forces onto the battlefield against IS and to find ways to split Baathists and tribes away from their alliance with IS. Also, if a Sunni-Shiite power-sharing arrangement proves impossible to attain, the disintegration of Iraq will become inevitable. In that case, a U.S. relationship with a Sunni leadership capable of defeating IS on its home turf in western Iraq will be critically important.

Kurds, meanwhile, want a country with two systems—a federal Iraq in the Arab part of the country and a confederal Kurdistan—in which the regional government keeps recently acquired territories and controls its own air space, arms purchases and oil exports. If power sharing does not work, Kurdish leaders would likely push for sovereignty and independence. Kurdish leader Massoud Barzani has stated that the current effort at forming a unity government is Iraq’s last chance. Should this effort fail, it would serve the interests of both Baghdad and Erbil for the Kurds to pursue sovereignty and independence through an agreement with the central government.

Even if progress is made in Iraq, the IS threat will persist in the absence of a settlement in Syria. As in Iraq, the most feasible formula for resolving the crisis in Syria is a unity government with power sharing at the center between the Assad government, moderate Sunnis, and Kurds and other groups, and devolution of authority to regions and provinces, perhaps organized on an ethnic and sectarian basis.

The defeat of IS will require a stronger military response than the United States has fielded to date. The model should be based on the successful effort to topple the Taliban government after 9/11, which involved U.S. special forces and air power working in combination with local forces. However, it should be more robust than the Afghan campaign in terms of security assistance and follow-on stabilization efforts.