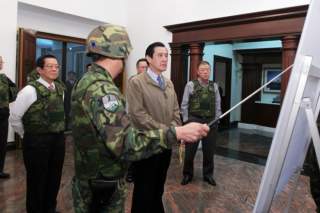 While Taiwanese pilots, many of whom are trained in the U.S., continue to enjoy a qualitative advantage over their PLAAF opponents, that gap is slowly being narrowed as China acquires and develops 4.5th- and 5th-generation aircraft and may in the not-so-distant-future gain actual combat experience. By investing in modern air-superiority and combat aircraft, Taiwan would undermine China’s ability to own the airspace in the Taiwan Strait — a critical early-phase component in a major campaign to invade the island that, given the TAF’s ageing fleet, is becoming increasingly achievable.

Besides air superiority, a modern multi-role fighter with low radar signature and a longer combat range than the TAF’s legacy F-16A/B would be a major boost to Taiwan’s ability to conduct bombing runs over Chinese territory as part of a multilayered power-projection strategy that involves electronic warfare, cruise missiles and, as discussed, long-range combat UAVs.

Despite the rapprochement that has occurred between Beijing and Taipei since 2008, Taiwan’s defense strategy has adopted an increasingly offensive nature. Nothing better encapsulates this seemingly contradictory development than the Hsiung Feng (“Brave Wind”) family of cruise missiles, which provides the Taiwanese military with anti-ship and land-attack (LACM, e.g., HF-2E) options. Developed by the CSIST, Taiwan’s premier weapons research institute, the HF missiles have in recent years absorbed a larger share of the defense budgets allocated for R&D and production. According to reports, CSIST may be in the process of developing a medium-range (1,200km) surface-to-surface cruise missile.

Although Taiwan’s Ministry of National Defense has been vague on whether such a program is in the works, such an endeavor would make perfect sense. The introduction of medium/long-range, terrain-contouring cruise missiles (hypersonic would be a plus but probably is beyond the ability of Taiwan to develop for the time being) would complement the HF-2E, which has an estimated range of 650km, and make it possible for the Taiwanese military to target C4ISR, radar, Second Artillery (e.g., Dong Feng-15 launchers), airfields, and other critical sites in the PLA architecture deeper inside China. Equipped with either conventional or anti-radiation warheads, extended-range HF LACMs could exploit weaknesses in the Second Artillery Corps and disable its ability to initiate missile attacks against Taiwan or regional allies. Using well-placed intelligence sources, Taiwan could also threaten to disable China’s ability to initiate nuclear strikes by targeting critical command and control (C2) sites and thus disable its nuclear deterrent against the U.S. (arguably this would be an extreme measure, to be take only as a last resort during high-intensity conflict).

Through a combination of fixed and mobile launchers, Taiwan could ensure the survival of enough launch sites to maintain an ability to strike high-value targets inside China. Ship-launched variants of a medium/long-range cruise missile would boost the dispersal/survivability value of what is, beyond doubt, an indispensible means of retaliation.

Although Washington has voiced reservations about Taiwan extending the range of offensive weapons under the Missile Technology Control Regime (MTCR), a changing regional context fueled by Chinese belligerence and possible renewed interest in including Taiwan as a regional security partner could convince the U.S. government of the virtues of assisting Taiwan with its missile program through cooperation or relaxed rules on the transfer of key technologies.

Some people have given up, but continued interest in—and support for—Taiwan’s acquisition of diesel-electric submarines is a clear indication of their utility. Above all, the introduction of new submarines in the Taiwan Navy (only two of Taiwan’s total of four submarines are combat-ready; the other two belong to a museum) would pose a major headache for China, whose anti-submarine warfare capabilities remain limited. Anything that can go undetected and that can threaten PLA Navy (PLAN) vessels in the Taiwan Strait or in the Western Pacific (in Taiwan’s “rear”) will make Beijing pause.

Several plans have been floated for a Taiwanese submarine program. Although U.S. naval yards no longer make diesel-electric subs (and must therefore rent them from other countries, at high cost, for annual exercises), a number of European countries continue to build them and could provide highly useful know-how for the domestic development of medium-displacement ships by Taiwan. Japan, which is in the process of revising not only its rules of engagement but also the regulations overseeing the transfer of dual-use technologies, would also make a natural ally of Taiwan for an indigenous submarine program. A well-placed source told this author that under current laws, Japanese technicians could be temporarily “retired” and in turn hired by Taiwanese shipyards to help with hull designs, ostensibly the most challenging aspect of a submarine program. Evidently, any cooperation between Japan and Taiwan on defense matters would be hugely controversial and predicated on Tokyo’s (and Taipei’s) willingness to risk the ire of Beijing. Another option, which also remains distant for the time being, would be the acquisition of “old” Japanese submarines, which are taken out of service after only 18 years. U.S. defense contractors, provided that they can obtain the go-ahead from U.S. authorities, would play a key role in integrating sensors and weapons systems.

A handful of “quiet” submarines armed with torpedoes (anti-ship and coastal suppression), and possibly with cruise missiles (e.g., HF-3), would go a long way in deterring PLAN efforts to cross the Taiwan Strait or to attack it from its rear in the West Pacific, not to mention in protecting Taiwan’s sea lines of communication, cargo, and energy shipments.

“Man as weapon” qualifies as our fifth, and not necessarily the least important, means of deterring China. Special forces would be the last line of defense during a major armed conflict in the Taiwan Strait, and the only part of a layered defense strategy whose activities would take place solely on Taiwanese soil. Everything else having failed and as the PLA approaches Taiwan’s beaches—including Taiwan proper as well as Penghu—special forces and elite reserves would kick in by attacking landing units. Working closely with the Army, which would ideally be equipped with an array of weapons including the Lockheed-Martin MGM-140 ATACMS short-range ballistic missile (to target staging areas along the Fujian coast) and various anti-armor/counter-landing weaponry, special forces and elite reserves would have the means to ensure high mobility, quick dispersal and survivability. Although Taiwan already has special forces units, many more bodies are needed to constitute a credible deterrent against PLA landing and occupation forces. To make up for that quantitative handicap, a small percentage of Taiwan’s estimated 2 million-plus reserves who qualify for enhanced training should be readied (and compensated) for high-intensity combat operations, urban warfare, sabotage, and non-conventional operations. The object is to ensure that PLA soldiers that seek to establish a foothold on Taiwan would come under sustained attack by forces that can disappear as quickly as they materialize and which could not be easily targeted by PLAAF air cover (by this phase in a conflict, we could assume that the Chinese air force has won control of the airspace in the Taiwan Strait). Investments in night-vision equipment, sniper rifles, anti-armor weapons, rapid-mobile transportation and devices enhancing situational awareness and communication would take up a marginal share of future defense budgets while greatly ameliorating the ability of Taiwanese ground forces to inflict unacceptable damage on PLA soldiers venturing on Taiwanese soil.

The point of all this would be to force Beijing to think not only about the cost of reaching Taiwan, but of what would happen to its soldiers once they got there. As recent experiences in Iraq and Afghanistan have made perfectly clear, winning the conventional phase of a war is the easiest part. It’s what comes next—the pacification of foreign land—that can cause the most serious headaches. If low-tech forces like Iraqi guerrillas or Taliban militants can take on the U.S. military and the world’s premier military alliance, surely well-trained, tech-savvy and properly equipped Taiwanese guerrillas could accomplish similar feats, if not do better.

A former analyst with the Canadian Security Intelligence Service, J. Michael Cole is editor in chief of www.thinking-taiwan.com, a senior non-resident fellow at the China Policy Institute, University of Nottingham, and an associate researcher at the French Centre for Research on Contemporary China (CEFC) in Taipei.