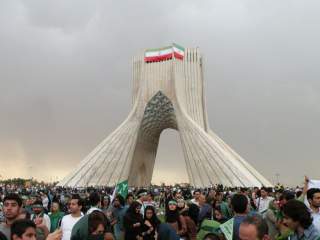 Iranians go to the polls Friday in two elections: one for the legislature (the Majles) and one for the Assembly of Experts, a little-used but important body of Islamic clerics charged with supervising and selecting the Supreme Leader. It’s a big deal: officials suggest some 60–70 percent of eligible voters will cast their ballots, and figures across and outside the Islamic Republic’s political spectrum have encouraged participation. President Hassan Rouhani, in power since 2013 and with the nuclear deal under his belt, hopes to pick up reformist and moderate allies in the Majles that can help him implement his domestic agenda; conservatives want to hamstring him and build momentum to take back the presidency next year.

As Karim Sadjadpour, an Iran expert at the Carnegie Endowment, has often said, Iranian elections are “unfree, unfair and unpredictable.” The Guardian Council, a twelve-member outfit tasked with protecting Iran’s constitution, has liberally applied its power to disqualify candidates for both elections, only allowing half of potential Majles contenders and one in five Assembly of Experts contenders through. These disqualifications appear to have tilted against reformist factions, with the initial round blocking 99 percent of reformist candidates. On the Assembly of Experts side, Hassan Khomeini, grandson of the Islamic Republic’s founder Ruhollah Khomeini, was disqualified in spite of prominent endorsements from other clerics. (At just forty-three years old, Khomeini would have been decades younger than most of the other Experts, but it’s worth noting that a twenty-four year-old was found qualified.) The current field is a product of constraints imposed from above; as Saeed Ghasseminejad noted in the National Interest last week, it is so narrow that the reformist list for the Assembly of Experts had to draw on figures who’d been involved in killing dissidents.

All this takes place in a context where political competition is not open and where political competition that is allowed operates under restrictions. Prominent reformist leaders are under house arrest or barred from appearing in the media; those who oppose the regime itself, even if committed to changing it by democratic means, are kept out of politics and often in prison. Candidates had just one week to campaign, and faced restrictions on the size of their rallies; nonhardline candidates have been subject to violent harassment by vigilantes who enjoy the regime’s tacit support. One reformist candidate had his car set on fire; another was prevented from speaking in a mosque when rowdies let off tear gas. Those involved in previous incidents like these have enjoyed relative impunity: last year, for example, Ali Motahari, a conservative regime critic who is heading a list in the current elections, was riding in a vehicle that was attacked with sticks, stones, and pepper spray while he was on the way to give a speech; the perpetrators received suspended sentences, and those who had invited Motahari to speak were fined. Even negative political ads are barred. The result is a disorganized field with unclear platforms (although Al-Monitor’s Arash Karami spotted one candidate apparently promising his supporters a year of free internet) and little accountability.

Even so, the result of the election still matters. There are still differences among the candidates. A major win for the reformists, centrists and nonhardline conservatives would send a strong signal to the regime about the Iranian public’s desires and will raise the stakes of internal debates about the country’s direction. A more open political sphere is one possible outcome of that. A conservative win, on the other hand, would weaken the moderate government of Hassan Rouhani and potentially render him a lame duck ahead of 2017’s presidential elections.

It’s entirely possible that the results of the election, like the candidate qualifications, will be engineered. Supreme Leader Ali Khamenei has assiduously trimmed the wings of potential rivals on both left and right. A major win by either camp, but particularly the reformist camp, could create momentum that he might not be able to control. A solid reformist victory would also strengthen Rouhani and increase the chance of dissensus within the regime (we’ll get to this scenario later). Altering or reversing the results of an election would create the risk of unrest, although the successful crackdown in 2009 and the presence of a moderate administration (whose power would be jeopardized) limit this danger. The regime does have one potential safety valve to alter the results without making fundamental changes. When candidates fail to get a majority, a runoff results. This runoff is much smaller than the main election since only some seats are up for contestation; throwing narrow-margin moderate victories to runoffs and then engineering the runoffs could claw back some seats for the conservatives.

3. Does the “JYM triangle” survive?

As Muhammad Sahimi wrote in the National Interest last week, reformists have been energized by a bid to defeat three prominent hardline clerics: Ahmad Jannati, Mohammad Yazdi and Mohammad Taghi Mesbah Yazdi. The group’s initials give them their nickname, the “JYM triangle” (mosalas-e jeem), and they all have long been major players in the regime; Jannati and Mesbah in particular are associated with extreme theological trends and rumored links to violence. Sahimi noted that the JYM triangle’s members “are despised by a great majority of the people,” but that their loss would

“be an embarrassing defeat for them and for Khamenei. Such a possibility has terrified the Supreme Leader, to the extent that he has been forced to personally defend them in public speeches. Alternatively, under the guise of “national interests,” the deep state may pressure Rouhani and his minister of interior, Abdolreza Rahmani Fazli, to commit fraud—as happened in the presidential elections of 2009—in order to “elect” the JYM trio. That would surely create a huge confrontation between the Rouhani administration and the deep state.”

It’s not clear just how feasible removing the three is, but talk of it has provoked a severe reaction from the regime, which has attempted to frame the campaign against them as a British plot (the BBC’s Persian service having covered the issue).

4. If the moderates prevail, how will they act?

Iran has had a reformist Majles before—the Sixth Majles (2000-2004). This overlapped with the presidency of another reformist, Mohammad Khatami. The Sixth Majles may have been the closest Iran has come since the erection of the Islamic Republic to a serious, independent legislature—among other things, it made heavy use of its oversight powers. However, it came into serious conflict with the Guardian Council, which has the power to block laws the Majles passes. This interference enabled a second line of attack: as the British historian and diplomat Michael Axworthy notes in his book Revolutionary Iran, state media “depict[ed the Majles] as an ineffectual talking-shop.” The next election cycle saw mass disqualifications that gutted the reformist camp. Those who think that a moderate win in Friday’s elections will enable serious changes by Rouhani ought to remember the Sixth Majles’s fate.

More broadly, Iran’s legislature is weak on paper and even weaker in practice. Fundamental elements of Iranian politics are not within its scope. The Majles does not have the power to change the direction of Iran’s foreign policy, to end arbitrary imprisonment and torture, to halt a wave of executions that has allegedly left an entire village without any men, to combat the growing role of the Revolutionary Guards in the nation’s economy or to liberalize the social and political spheres. This election is about symbolism as much as substance.

The import of the Assembly of Experts election is murkier. Supreme Leader Khamenei has had health issues and is rather old; he has alluded to the possibility of his demise in emphasizing the importance of this election. Friday’s winners may end up picking his successor. Even so, there has been little suggestion that the Experts would fully exercise their power and supervise Khamenei (such as by sniffing around his vast economic empire, with a value estimated to be roughly the size of Slovakia’s GDP) or otherwise change the balance of the regime. It’s also unclear just how much influence the Assembly of Experts will have on selecting the next Supreme Leader. I’d encourage readers to check out this essay by Stanford’s Farzan Sabet, who suggests there are fundamental questions about the body’s purpose at stake, and this essay by the Washington Institute’s Mehdi Khalaji, who argues that the Assembly of Experts has been weakened too much “to autonomously determine who the next Supreme Leader will be,” and that the Revolutionary Guards will be the real center of power.

5. Will there be stability after the election?

The 2009 elections saw massive protests and a crackdown that continues to shape Iranian politics. There is at least some chance that this will happen, particularly if the election is stolen. However, there are risks to long-term stability embedded in both moderate and hardline victories.

If the moderates win, the Iranian deep state will almost certainly act to undermine them. This is already happening: beyond violent interference with campaigning, the Revolutionary Guards’ intelligence arm has detained multiple journalists and dual citizens of Western countries. This week, they arrested Bagher Namazi, an eighty-year-old, Iranian American former UNICEF official; he had been lured to the country by a promise that he’d be allowed to visit his son, Iranian American businessman Siamak Namazi, who has been held there since October. Arrests like these serve to warn Iranians and prevent the government from cozying up with foreign powers. But it can get much worse. The reformist Khatami presidency saw the Chain Murders (a wave of killings of intellectuals that appeared to have been coordinated at the highest levels of the regime), arrests of Jews in Shiraz, a bloody crackdown against student demonstrators, and mass closings of newspapers. (Axworthy has argued that “the press crackdown proved more damaging to the reformists than the hard-won success in the Majles elections was a benefit.”) Why should we expect anything different today?