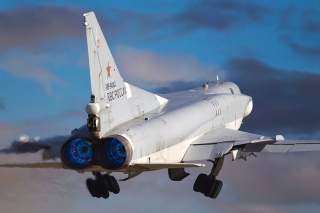 Editor’s Note: Please see previous works by Robert Farley including The Five Most Overrated Weapons of War, America’s Troubled F-35: Five Ways to Replace It, Will the F-35 Dominate the Skies?, Five Best Bombers of All Time, Top Five Fighter Aircraft of All Time, and Five Revolutionary Soviet Weapons of War that Never Happened.

The continued deterioration of relations between Russia and NATO may not yet have resulted in a new Cold War, but it’s undoubtedly produce an environment in which Russia has independent reasons to try to hurt the United States.

While the arms trade between China and Russia exploded after the fall of the Soviet Union, shipments of major systems slowed in the early part of last decade.  Part of the reason was demand; China felt that it no longer needed to pay top dollar for Russian systems that it could build itself.  Another reason, however, involved Russian intellectual property concerns stemming from Chinese copying, and potential export, of Russian military systems.  This made Russia reluctant to export its most sophisticated weapons.

But now we find ourselves in a situation where Moscow has become willing to take risks in order to give Washington a headache.  One way in which Russia can do this is overcoming any internal obstacles to the export of sophisticated weapons to China.

Although the Russian defense industry has decayed since the end of the Cold War, it still retains a great deal of expertise and human capital, which China (a growing military power) could use to good effect. What kind of systems might this involve? Here are five areas in which Russia-China collaboration could prove useful to Beijing, and problematic for America.

Engine construction has been one of the biggest roadblocks in the Chinese aviation industry over the past decade. Problems with power and reliability afflict not only legacy systems (such as the J-10, J-11, and J-15), but also China’s new stealth fighter prototypes, the J-20 and the J-31.

Russian engines don’t have a reputation for extraordinary reliability, but they have consistently performed better than their Chinese counterparts. One analyst argues that China’s interest in acquiring Russian Su-35 Flankers stems from an interest in examining and replicating the engines, which would jumpstart China’s own jet engine industry.

Assisting China’s jet engine industry would represent a major risk for Russia.  It would eliminate one of the largest potential customers for Russian engines (China), while also improving China’s export position.  Nevertheless, under certain circumstances a long-term relationship might make sense, especially if Russia expected few new orders from the PRC in any case.  And Chinese jets with more powerful, reliable engines would prove a much more impressive threat to the U.S. Navy (USN) and the U.S. Air Force (USAF).

The People’s Liberation Army Air Force (PLAAF) continues to operate the H-6, a derivative of the old Soviet Tu-16 “Badger” bomber, a very rough equivalent of the US B-47.  Various reports suggest that China is looking into a new bomber, with at least one potential prototype in the works.

Russia has considerably more experience with heavy bombers that China, and still operates several variants that exceed the capabilities of anything the PLAAF has flown.  These include the Tu-95 Bear (and its maritime variant, the Tu-142), the Tu-22M Backfire, and the Tu-160 Blackjack.  All of these models are old, but would still represent an advance on what China currently operates.

Indeed, as the Soviets expected their strategic bomber force to operate against NATO naval forces, the Russian experience with bombers comports nicely with Chinese needs. Soviet bombers provided a critical threat to U.S. carrier battle groups during the Cold War, and would fit snugly within China’s anti-access system of systems.

Analysts have periodically raised the idea of a potential sale of Tu-22 Backfire bombers from Russia to China, but no deal has ever come to fruition.  The resistance appears to have come from the Russian side, out of concern about potential knowledge leakage and excessive growth of Chinese airpower. Indeed, Tu-22Ms would give China an additional long-range strike potential against U.S. bases and warships in the Pacific.

Whether Russia decided to export Tu-22Ms directly to China, to license their production, or simply to provide technical assistance with China’s new bomber projects, collaboration could produce a much more lethal PLAAF.

As with other systems, China has leapt forward in the past 30 years with respect to submarine technology.  The People’s Liberation Army Navy (PLAN) now fields respectable nuclear attack submarines, diesel electric subs, and even ballistic missile subs.  However, these boats remain substantially behind U.S. standards, and even behind the standards set by the latest generation of Russian subs.

Despite Chinese advances, the PLAN could learn a lot from the Akulas, the Project 949s (Oscars), the Yuri Dolgurukiy, and even the troubled Ladas.  While the PLAN’s subs expect to fill broadly similar missions to those conducted by Soviet boats in the Cold War, Chinese submarines remain much noisier than their Russian counterparts, and China has yet to perfect a “hunter-killer” sub that can tangle directly with the most advanced American submarines.

To be sure, Russia has closely guarded its submarine technology in the past, and production techniques for submarines appear to be some of the most difficult industrial processes to master, or transfer.  Nevertheless, the leasing of an Akula to India in recent years suggests that Russia is open to the possibility of an arrangement.  Russia won’t supply China with everything it needs to build an equivalent of the Yuri Dolgurukiy, but an array of technical assistance could still substantially improve the next generation of Chinese submarines.

In the concentration of China's anti-access system of systems, less attention has been paid to the air defense network.  Most literature has focused on the offensive elements of the defensive system, including submarines, cruise missiles, fighter-bombers, and ballistic missiles.

And yet the integrity of the A2/AD system depends on the effectiveness of Chinese air defense systems.  If U.S. aircraft and cruise missiles can strike Chinese airbases, communications nodes, missile launchers, and logistics centers, then the entire system could fall apart before completing its mission.

China has done good work on its air defense system, especially with the internationally competitive HQ-9.  Nevertheless, the addition of Russia technology could only increase the robustness of the Chinese air defense network. Recently, it appears that Russia is preparing to export the S-400  SAM system to China, which would help the PLA fill both technical and coverage gaps. The S-400 can track and engage targets at a longer range than the HQ-9, allowing China to project an air umbrella over Taiwan.

China has made impressive leaps in the last twenty years with respect to ballistic missile technology.  Driven in part by the Second Artillery, Chinese ballistic missiles now represent a sophisticated, multifaceted threat to any potential opponent.

However, China still has much to learn from Russia, both in terms of short range and long range missiles.  The Russian Iskander-E reputedly has terminal maneuvering characteristics that exceed any Chinese missile, and would provide the PLA with a major advantage in a wide array of potential conflicts.  Russian ICBMs and SLBMs are still considerably ahead of their Chinese counterparts.

As with several of the other systems, Russian objections to export rest in security and intellectual property concerns.  If China replicates Russian missile technology, the PRC could potentially muscle the Russians out of the export market.  Similarly, some in the Russian armed forces view the prospect of exporting advanced short range missiles to a large, powerful neighbor with some serious trepidation.  But then China may soon match Russian technology in any case, making reticence pointless.

Things have changed since the 1990s.  China has become an impressive producer of military technology in its own right.  It can no longer use everything that Russia produces, and its systems are increasingly competitive with Russia’s on the international market. For Russia, the risks of export to China have increased, especially because of concerns over China’s looe interpretation of intellectual property.  Nevertheless, if Russia doesn’t mind engaging in some risk-acceptant behavior that could hurt the United States, broadening its weapon exports to and technical cooperation with China could fit the bill.