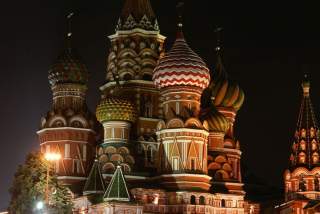 What better way to help the Americans celebrate their bicentennial than by attacking and destroying their global alliances and then defeating them in a no-kidding shooting war?

It is, I admit, a pet peeve to hear younger people talk about how anything in America in the twenty-first century "is just the worst ever," a whine that instantly identifies the speaker as someone who either did not experience, or cannot remember the 1970s. If the Soviets were going to take us down, the mid-1970s would have been the time to do it.

Consider the Western landscape in 1976. For two years, America was governed by Gerald Ford, a very nice and able man whom no one elected, and whose name at the time was inextricably linked to the pardon of his nearly impeached predecessor, Richard Nixon. Although Ford retained Nixon's secretary of state, Henry Kissinger, the Nixon-Kissinger policy of detente with the USSR was so widely regarded by other Americans as a failure—one that emboldened, rather than restrained Moscow—that Ford eventually banned the word from the White House.

Come to think of it, no one elected Ford's vice president, either, since Ford himself assumed that office when Nixon's number two, Spiro Agnew, likewise resigned in disgrace. The White House was thus occupied by two men whose only link to the American people were some Senate confirmation hearings. (As the fictional Frank Underwood says upon taking the Veep's oath of office in the series House of Cards: "Democracy is so overrated.")

At home, the U.S. economy was a wreck. Oil embargoes and deindustrialization, among other problems, created "stagflation," the condition of high inflation, high unemployment and low-growth that is so rare we don't even use the word anymore. From the mid-1970s to the early 1980s, interest rates stayed startlingly high, peaking in 1980 at a breathtaking 21 percent, or roughly six times as high as they are today, placing house and car loans out of the reach of ordinary Americans. (Note to my students: my first student loan in 1979 was at 13.5 percent, which today would be considered usury. I shed no tears for you.)

Overseas, the United States had been driven out of Vietnam in 1975 by a coalition of Communist states, including the USSR. That same year, President Ford had to fly to Brussels literally to plead with NATO to stay together. The U.S. military, the great fighting force that stormed the beaches of France only thirty years earlier, was a hot mess, rife with drugs and crime, and burdened by too many people whose only other option was jail. (One of my friends, now retired, was a company commander in the U.S. Army in Germany in this period; things were so bad that officers did not enter the barracks of the men they commanded at night without wearing a sidearm.) Many men and women served with distinction in the U.S. armed forces in the 1970s, but we couldn't pick and choose which ones would be on the front lines if the Soviets rang the bell.

So why not attack? It was not beyond the Soviets to create some kind of false premise, perhaps involving their blood feud with the Germans, and to strike into the heart of Central Europe, preferably in the dead of winter. One violent, short, brutal shock, and NATO shatters like spun glass. The Americans fall back. The Germans retreat into a house-by-house defense against the invading Soviets. (How'd that go the last time?) The Poles and East Germans, although no friends of Russia, are fed Warsaw Pact propaganda and are led by officers who wouldn't mind getting a little payback against the West Germans for their own reasons, and they fight.

The Belgians fold, the French want no part of it, the Danes and Norwegians are warned not to interfere. The Greeks and Turks, busy fighting each other since 1974, hardly notice. Only the British Army of the Rhine holds on—and not for long.

But wait, you say: Ford would never have allowed it. We'd have used nuclear weapons and taken down those invading Soviet tank columns, and then let Moscow think hard about whether this was worth Armageddon.

Maybe. Or maybe, with NATO unraveling, allies deserting, and the Soviets pointing thousands of highly-accurate nuclear warheads at North America, we'd have done what had to be done, and taken the deal, handing over Europe to its new masters. The U.S. president, elected by no one, might not have felt he had the authority to release nuclear devastation on millions of people who had little voice in his authority.

And after Vietnam, the tumult of the 1960s, and the crash of the American dream in the 1970s, maybe we'd have surrendered because deep down, we felt like we deserved to lose.

In 1985, a man named Grigorii Romanov made a run at becoming Soviet leader. A ghastly and vicious Soviet hawk (and apparently, an unstable alcoholic), he could well have triggered World War III and for a time, he seemed intent on doing it. He was too late: by then, America and its allies had regained their confidence—and their strength—while the USSR lost its way, politically and militarily. As the 1970s came to an end, so did the last clear chance at a Soviet military victory over the West.

Leonid Brezhnev wasn't the brightest man. When we finally cracked open his journals, they were mostly about things like his weight and his hunting trips. (By contrast, Ronald Reagan, long caricatured as a dunce, wrote in a journal daily and produced a historical record of his administration.) Brezhnev also wasn't much of a Communist: he collected cars and jewelry, chased girls, and generally partied hard. A Soviet joke of that era has Brezhnev's mother surveying all of his luxuries with a worried eye, and when her son asks what's wrong, she says: "Leonid, this is all very nice, but what will you do if the Communists come back?"

Like most of the mediocre men who ascended to power in the postwar Soviet Union (see "The Class of '38," above), Brezhnev believed in the Soviet system, insofar as he seemed to understand it. It had been pretty good to him, after all, and after the U.S. defeat in Vietnam and the subsequent collapse of U.S. foreign policy in the mid-1970s, he and his lieutenants led the USSR through a dramatic and ill-advised period of imperial overextension, culminating in the disastrous decision to invade Afghanistan in 1979.

Until that huge misstep, however, the Soviets felt they were on a roll. As Gorbachev advisor Aleksandr Yakovlev later wrote, "the Soviet leadership of that time acted somewhat blindly. It was sufficient, for example, for any African dictator to declare his 'socialist orientation'. . . for assistance to be practically guaranteed." Brezhnev actually said to his inner circle at one point: "Why look, even in the jungles they want to live like Lenin!”

Well, no, “they” didn't. But that didn't stop the USSR from pouring money—precious hard currency they could hardly spare—into one failing Third World project after another. In some places, this made sense. Cuba, for example, was a Communist showplace right on the U.S. doorstep and a thorn in Washington’s side. But Ethiopia? Nicaragua? Even Grenada, where the Soviets actually believed they were adding yet one more country to a nonexistent Caribbean socialist commonwealth? These were fantastically expensive vanity projects, undertaken by Soviet leaders who had no idea how the laws of economics worked, and who did not understand that a financial duel with the West, even one led by the down-on-its-luck United States, was a terrible idea.

In some ways, the invasion of Afghanistan was far worse than the U.S. involvement in Vietnam. Washington waded into a slow-motion escalation that bogged us down in a war we thought, at first, we could win. The Soviet invasion, by contrast, was completely hopeless, and the Soviet leaders knew it before they went in. We have the records of their meetings, and we know exactly what they said: they worried that somehow Afghanistan (like Egypt in the 1970s) would flip and join the Western team. They knew an invasion wouldn’t work, but they also had no idea what else to do, so they ordered one anyway.

Again, the Soviet economy could afford none of this. Most estimates of Soviet economic growth suggest that the Soviet economy came to a halt in the mid-1970s—in other words, just as they were feeling their expansionist oats and, in the words of a former top Soviet policy advisor, "binging like drunks" on weapons. Perhaps a period of consolidation, reform, and internal reorganization would have been a better idea. But that would have required that the Soviet Union at the time be led by men of vision and capability (and women, too, of whom there were none, ever, in the Soviet leadership). And since Stalin killed all those guys earlier...well, you get the idea.