Five Ways War with China Could Be Started… or Avoided 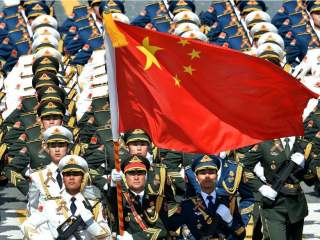 Sometime soon, perhaps before the end of the year, the U.S. Navy could perform another freedom of navigation patrol in the Spratly Islands, this time near Mischief Reef, another low-tide elevation that China has extensively built up with dredged sand. The last such patrol, conducted on October 27 by USS Lassen near Subi Reef, was a botched mission in the view of many analysts, since it left observers wondering whether the United States had inadvertently reinforced China’s sovereignty claims. The forthcoming Mischief Reef patrol may offer a much-needed “mulligan” to an Obama administration still striving to achieve credibility for its “Asia rebalance” policy.

How will China’s People’s Liberation Army (PLA) respond to the next patrol? After USS Lassen’s cruise, the PLA dispatched J-11B fighter-attack aircraft to its airbase on Woody Island in the nearby Paracel island chain, and then conducted training exercises with the Flanker-variant aircraft over the South China Sea. China has the capacity to project substantial anti-air and anti-ship capacity to the Spratlys. How China will respond to the next patrol remains a mystery and is no doubt contributing to the Obama administration’s apparent skittishness in the South China Sea.

What we do know is that China’s leaders believe that they will one day be able to challenge the U.S. military position in the western Pacific. We know this because for two decades China has expended enormous, and still rapidly growing, resources on building up a full range of air, naval, missile and military space power in the region, all specifically designed to counter an intervention by U.S. expeditionary forces. We have to assume that successive Chinese administrations would not have made this investment if they did not believe it could yield results.

But will China’s military buildup eventually result in a clear reversal of the military position in the western Pacific, a new correlation of forces that would compel U.S. policymakers and military planners to peaceably accept a Chinese-led order? Historian Geoffrey Blainey explained in his masterful The Causes of War (1973) that when competing players agree on their relative strengths (who is dominant and who is not), conflict is unlikely. U.S. supremacy meant that China was unable to challenge the deployment of two U.S. aircraft carrier strike groups during the 1996 Taiwan Strait Crisis. Today’s leaders in Beijing probably also lacked the confidence to oppose USS Lassen’s patrol (and likely also concluded that the stakes this time were not worth such a challenge).

But a decade from now, when the build-out of the PLA’s space sensor network, anti-ship missiles forces and submarine fleets are much more mature, leaders in Beijing may be hoping that all the players come to a new agreement on relative strengths, and once again, as in 1996, avoid a conflict when a new crisis appears. Such a hypothetical new agreement would presumably also mean the end to America’s freedom of navigation challenges in the Spratlys and elsewhere in the western Pacific.

Naturally, the transition from one dominant player to another creates a very dangerous interval. Indeed, the goal of the Pentagon’s “Third Offset” initiative is to prevent such a transition from ever occurring, or to even be considered. As Blainey deduces, “wars usually begin when two nations disagree on their relative strengths.” Whether decision-makers in either Washington or Beijing are willing to risk military escalation will depend on the confidence they have in various war-fighting concepts, along with the troops and equipment that would execute them. If Blainey is correct, war could occur—instigated by, say, direct PLA resistance to a future U.S. freedom of navigation patrol—because of disagreement (or misperception) by the players over the efficacy of at least five concepts that have thus far been untested in large-scale combat.

1. Will the PLA’s “reconnaissance-strike complex” work?

Drawing on the Soviet reconnaissance-strike complex programs from the late Cold War era, the PLA’s own system is also composed of satellite, airborne and other sensors; a command-and-control structure; and a variety of long-range anti-ship cruise and ballistic missiles designed to strike adversary naval task forces. China is far ahead of the United States in theater-range ballistic missiles (the United States has none), as well as anti-ship cruise missiles, while the PLA’s cruise missile inventory far exceeds that of the United States in range, speed, types and numbers. The PLA Air Force has made great improvements in anti-ship doctrine and training, especially in deep ocean operations, a trend that will undoubtedly continue in the decade ahead. In addition, annual reports from the Pentagon and the U.S.-China Economic and Security Review Commission make clear that the PLA continues to rapidly expand its space-based and airborne ocean surveillance sensor capacity.

What remains unknown how well the PLA’s battle staffs have linked together the sensor networks and communication systems to make a robust “anti-navy” capability that would hold up under stress. Also unclear is the reliability of the PLA’s various long-range anti-ship missiles when employed against moving and defended targets while at sea. More testing in the years ahead may answer questions and uncertainties regarding future Chinese capabilities. If not, remaining uncertainties and debate will contribute to Blainey’s “disagreement dangers.”

“Send in the carriers” has been a long-standing U.S. crisis response technique. Indeed, it was President Bill Clinton’s employment of two carrier strike groups during the climax of the 1996 Taiwan Strait Crisis that caused China to back down—and to subsequently launch the PLA’s anti-access-centered military buildup, which continues to this day. In spite of the increasing missile threat to U.S. aircraft carriers, U.S. policymakers almost reflexively turn to these warships as signaling devices during crises. That could be a disaster if the carrier strike group’s missile defenses are inadequate for future threats.

The U.S. Navy is striving mightily to improve its missile defenses. For example, the Navy Integrated Fire Control – Counter Air (NIFC-CA) concept will achieve new integration of sensors, data links and anti-missile weapons from a wide range of platforms, and would begin the carrier’s missile defense at much further ranges than currently. A contrasting concept would instead employ a tremendous concentration of short-range missile interceptors and focus missile defense on the last moments before enemy missiles impact U.S. ships. Further in the future, the Navy is looking to high-powered lasers and electromagnetic rail guns for missile defense, although there is skepticism among some engineers about the feasibility of these systems.

In the next decade, will the Navy’s carrier defenses be able to completely thwart a missile raid composed of over a hundred missiles, arriving on two or more axes? Even a few hits, say, less than a 95 percent interception rate by Navy missile defenses, would register as a lost battle for the Navy. As explained above, experienced Navy officials disagree among themselves on what approach to take to keep pace with the growing missile threat. That seeming confusion over how best to defend these ships could bolster the confidence (warranted or not) of PLA planners. And that could be another possible entry on Blainey’s “disagreement” ledger.

Beginning in the late 1990s, U.S. military analysts began worrying about the PLA land-attack missile threat to U.S. and allied air and naval bases in the western Pacific. Such concerns were expressed in reports from RAND, the U.S.-China Economic and Security Review Commission and the Pentagon itself. These reports explained the PLA’s increasing capability to shut down, at least temporarily, major U.S. bases in Japan, South Korea, Okinawa and perhaps Guam with precise ballistic and cruise missile strikes. Doing so would greatly suppress the Air Force’s ability to generate tactical aircraft sorties and could damage Navy pier-side ships and the ability to support those underway.

U.S. defense planners have responded by bolstering point air and missile defenses, adding theater missile defense capabilities and reforming runway and base repair capacity. The competition thus involves not only missiles versus anti-missiles, but also missiles versus quick-set concrete. Another aspect of the competition is adaptations such as the “Rapid Raptor” concept, which has the Air Force scattering small sections of fighter-attack and supporting cargo aircraft to dispersal and expeditionary airfields throughout the region. The U.S. Marine Corps plans a similar concept for its future F-35B squadrons.

Dispersing assets in a crisis seems to make sense. But it may not add to safety if the new expeditionary locations are eventually discovered but are less well-defended than the large hub bases. In addition, the difficulty of logistically supporting high sortie rates from widely distributed small bases may similarly undercut the intended effect. There are likely to be further moves in the “missiles versus bases” competition, which at various moments will add hope or confusion to planners on both sides.

Both the United States military and the PLA plan to suppress their adversaries’ ability to collect battlefield intelligence and transmit those results and subsequent commands to units in the field. For example, China has the most active counter-space program in the world and now regularly tests direct-ascent anti-satellite missiles. The U.S. Air Force tested an anti-satellite weapon in the 1980s and the Navy demonstrated a direct-ascent anti-satellite capability in 2008, when it downed a malfunctioning U.S. satellite with an SM-3 missile. Such capabilities could target various reconnaissance satellites in low earth orbit and perhaps communication and navigation satellites in higher orbits.