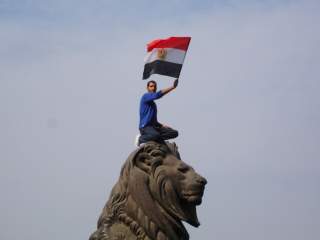 As the fifth anniversary of the Egyptian revolution unfolds, analysts have overemphasized the country’s fragile politics and uncertain security at the expense of the real impediment to Egypt’s return to stability: corruption. And while it’s fashionable to blame ‘neoliberalism’ or businessmen who benefited from the ancien régime, Egypt’s corruption woes are the result of more complicated economic and social pressures and they require national reconciliation to be resolved. This means closing the chapter on outstanding disputes with Egypt’s most controversial businessmen and further reducing legal roadblocks to new investment programs.

The challenge of corruption has been widely referred to but largely misunderstood among commentators on Egypt since 2011. Corruption in Egypt is two-fold. First, as in other countries in the region, low-level corruption, which mostly refers to the arbitrary but broad-sweeping powers of bureaucrats—mainly police officers but also clerks, health and education officials who oversaw inept government services—was the most visible driver behind popular protests in Egypt during the so-called Arab Spring.

Added to this low-level corruption was the perceived abuse of power and uncompetitive acquisition of wealth by well-connected businesspeople. This second form of corruption was less tangible for the vast majority of Egyptians but was an important source of public torpor against the Mubarak family and their associates in early 2011.

In June 2012, more than one year following the revolution, Mohammed Morsi, an inelegant engineer from Egypt’s Muslim Brotherhood, was elected president. Although long seen as a critic of corruption in politics, once in power Morsi had little appetite to address low-level corruption and failed to pursue meaningful legal reforms that would have made public sector bodies more accountable. More interested in politics and in shoring up the Muslim Brotherhood’s power base, Morsi failed to tackle the underlying challenges that continue to fuel Egypt’s corruption woes.

Morsi was removed in the summer of 2013 but the military-led government that replaced him has similarly stopped short of introducing effective reforms. On one hand, Sisi has overseen new constitutional provisions, the appointment of technocrats and high-profile investigations aimed to address aspects of the country’s corruption problem. But each of these initiatives has proven half-baked. Egypt’s new constitution broadly commits the government to combatting corruption, but competition among existing agencies with overlapping jurisdictions has undermined the implementation of a national anti-corruption strategy.

Technocrats have featured prominently in Egypt under Sisi, but they too have at times been the subject of allegations of impropriety. Notably, even Egypt’s now-deposed former prime minister, Ibrahim Mehlab, who had been a distinguished engineer prior to his appointment by Sisi, could not escape long-running controversies related to the Mubaraks. Mehlab had previously been the chairman of a large construction firm that reportedly carried out renovations to the Mubarak family’s private residences at the public’s expense. Allegations of this sort tarnished Mehlab’s credibility and harmed his cabinet’s reputation as a technocratic one.

Lastly, prosecutions of high-profile businessmen have for the most part been the result of arbitrary decisions motivated by politics that have coincided with trying times for the Sisi regime. The most egregious case was the bizarre arrest last November of Salah Diab, the provocative owner of one of the country’s largest industrial conglomerates, the PICO Group. The reasons for Diab’s arrest were never made clear, but the arrest itself coincided with severe flooding in Alexandria. At the time, a widely-circulated newspaper co-owned by Diab had been critical of the government’s lackluster response and commentators claimed Diab’s arrest was government retribution. The arrest shocked Egypt’s business community and the government quickly backed-down, quietly releasing Diab and unfreezing his assets only days after his initial arrest.

Five years on from the revolution, there remains no easy solution to corruption in Egypt today.

The widespread perception that low-level corruption is necessary for effective local government services has no real remedy short of seriously improving Egypt’s overall economy. Corruption, of course, often struggles in high-performing economies with strong private sectors and limited government. But short of radical changes to Egypt’s macro-economic prospects, the government could take three concrete steps that would begin to alleviate corruption and re-vitalize foreign investment.

First, Sisi’s government needs to put an end to the disjointed cycle of politically motivated prosecutions of successful businessmen and high-net-worth individuals. The threat of arbitrary prosecutions against businessmen such as Diab terrifies foreign investors and reduces the pool of potential partners in Egypt for major oil companies, banks, retailers and other investors.

Second, the government needs to strengthen Egypt’s new investment law passed last year. Egypt’s new parliament, however unrepresentative it may be, needs to play a role in amending the investment law, which should include a revamped and more straightforward procedure for government tenders for large infrastructure projects and the sale of public land.

Third, and most crucially, the government must lead a campaign of national reconciliation that closes the chapter on outstanding disputes with the group of discredited and in some cases exiled businessmen closely associated with the Mubarak regime. A reconciliation program should allow businessmen to return unlawfully-acquired assets that have been investigated by Egypt’s Illicit Gains Authority and pay a penalty to be determined by the courts. Liberal opponents of this initiative have wrongly claimed that it amounts to immunity for criminals and further incentivizes wrongdoing. But this ignores the already severe reputational damage done to these individuals. Few foreign investors are likely to partner with any among this group of discredited businessmen who are now persona non grata for in-house counsel and compliance officers at major multinationals.

Additionally, what is the realistic alternative to reconciliation in Egypt? There is no political will to serve former business associates of Mubarak with prolonged jail sentences. There is also an enormous economic and social cost to Egypt should it pursue arbitration proceedings against exiled businessmen in international jurisdictions. Opponents of reconciliation have made good the enemy of perfect and forget that the billions Egypt could recover through reconciliation could be directed towards new health and education initiatives, job training programs and the country’s burgeoning renewables sector.

Pursuing each of these measures would signal the government’s renewed commitment to much-needed public-sector reform and would create clarity for foreign investors looking to re-enter Egypt since the start of the upheavals in 2011. Each of these steps is critical if Egypt hopes to wean off its reliance on financial support from the Arab Gulf countries who are themselves struggling through a period of low oil prices and rising regional tensions. Without a robust anti-corruption campaign, national reconciliation and a more diverse pool of foreign investors, Egypt will remain mired in an endless cycle of internal disputes that will derail any economic recovery and prevent its return to stability.

Max Reibman is a Business Intelligence Associate at the Risk Advisory Group in Washington D.C. where he covers Egypt and the Middle East. He completed a PhD in Modern Middle East History as a Gates Scholar from the University of Cambridge in 2014. Follow him on Twitter @maxyreibman.