Fixing Both Sides of the U.S.-Mexico Border 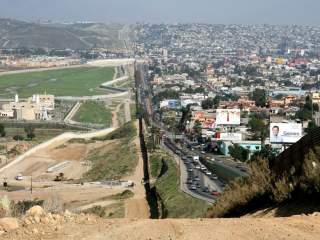 Vice President Biden and a team of senior U.S. officials travel to Mexico City February 24–25 for a High Level Economic Dialogue (HLED). Why? We trade over a million dollars a minute with Mexico. It is our second-largest export market in the world. Over thirty-five million U.S. and Mexican tourists legally visited one another’s countries last year. Over thirty-four million American citizens are of Mexican heritage.

The criticism that we hear about Mexico too often misses the depth, breadth and strategic importance of the relationship with our southern neighbor and our essential interest in Mexico’s success. Certainly, we must tackle ongoing problems: criminal networks operate on both sides of the border, soaring drug demand in the United States wounds communities with drugs from Mexico and, fueled by drug sales, cartel violence and corruption wounds Mexican communities. Illegal immigration strains systems and worries citizens in both countries.

Strengthening the American partnership with Mexico and building mutual prosperity is the best way to achieve U.S. interests, however. That is what the U.S.-Mexico High Level Economic Dialogue and the Vice President’s visit are about. The shared objectives include building a more efficient and secure border while working together to fight crime and terrorism, enhancing our ability to compete in world trade and grow our economies and collaborating to address the situations which fuel immigrants heading north, now largely from Central America.

From a strategic perspective, America’s two neighbors, Mexico and Canada, already provide us with a defense in depth against terrorism via close cooperation among security services and help provide a continental economic foundation from which to better compete in the world. Strengthening security and justice cooperation with the democracies on our land borders reinforces the geographic advantage we have, even as we enhance border security. We are making progress. There is still a lot to do, but more durable U.S. security will come from investing to build better partnerships with our neighbors, north and south.

The vice president’s visit reminds us that Mexico is critical to our economic success. We have created high-value production chains across the United States, Canada and Mexico that have allowed all three countries to adapt and become more competitive in a world marked by very difficult competition from China. Last year, we traded well over half a trillion dollars in goods and services with Mexico, selling more to them than to any country except Canada. And the quality of our trade means that much of what we import back from Mexico includes a high content of material produced in the United States—more than any other of our trading partners.

Mexico’s proximity and its ability to become a more productive part of North American value chains have opened the door for U.S. companies to continue operating here while competing successfully with China. A number of studies have pointed out that differences in the costs of production and transport between China and Mexico have narrowed or disappeared, making North America more competitive. The High Level Economic Dialogue has worked hard since 2013 to further enhance North America’s competitive advantages by improving border infrastructure, facilitating cross-border commerce and accomplishing other detailed technical work between the two governments.

Mexico’s government is implementing difficult structural reforms aimed at bolstering economic growth—reforms that can deepen our economic partnership and deserve support. For example, the government has embarked on a massive transformation of Mexico’s education system. It is putting emphasis on learning English and sending more Mexicans for university and postgraduate studies in the United States. A new generation of Mexicans with U.S. higher education will help both countries work together more productively and competitively in the future. Thus, education is part of Vice President Biden’s agenda in Mexico City.

So is energy. Mexico’s major energy reforms, which are opening the sector to foreign investment, can combine with the U.S. revolution in energy technology and the abundance of resources in Canada, giving North America a long-term strategic advantage as an energy powerhouse in hydrocarbons and renewables. Getting our governments and our private sectors to collaborate in this multi-year effort is in our strategic interest.

This growing economic partnership with Mexico has another important benefit. A Mexico that creates jobs and prosperity will generate fewer migrants. Recent studies indicate that immigration from Mexico has reversed, with more Mexicans returning to Mexico than coming to the United States. Making our border more open to legitimate commerce, even as we make it more secure, should encourage such trends. The apparent contradiction between rapid trade flows and more border security is disappearing, thanks to technology, better information sharing and growing mutual trust. We are making progress, as the High Level Economic Dialogue meetings will highlight, but building a border for the twenty-first century requires continued work, including more investment in infrastructure, innovative technology and secure transportation routes, over the years ahead.

The big immigration surges from the south over the last two years have been made up largely of Central Americans fleeing violence and poverty. The Mexican government is a partner in trying to manage those flows as well as in working to address the root causes that lead mothers, children and teenagers to risk the dangerous trip. A durable solution to the migration from Central America must include programs, reforms and local commitment to create jobs, strengthen governance and build effective justice and law enforcement systems where immigrants originate. This long-term effort is a smart investment to enhance North America’s security, requiring sustained U.S. resources and Mexican cooperation.

Fighting criminal networks and strengthening public security, law enforcement, justice and good governance must continue to be addressed as priorities in U.S.-Mexican cooperation. They reflect shared problems, and we share responsibility for building solutions. America’s sadly persistent demand for illegal drugs fuels many billions of dollars in illicit gains each year. These funds fuel powerful networks of criminal gangs and corruption north and south of our border. The drugs have devastating consequences for so many of our citizens, and criminal organizations bring terrible violence to our communities.

The United States and Mexico are responding with better bilateral security and law enforcement cooperation than ever before. They have agreed on new capacity building programs to help Mexico under the Merida program. They have reduced violence on the border and have improved repatriation of criminals. This effort requires continued persistence and determination by both partners. It is hard to build new justice institutions. Fighting corruption was a multi-decade effort in the United States, which still requires vigilance. The same holds true for Mexico where institutions need strengthening and are subject to intimidation and threat from well-funded, violent criminals. Thankfully, there is increasing consensus in Mexico that combating crime, corruption and impunity must be priorities. Mexican society is demanding progress. Mexico is formally shifting to a new justice system this summer very similar to our own. This major reform promises significant improvements, but much work lies ahead to implement it well. The United States should deepen partnership with those pushing for progress.

It is in America’s strategic interests to invest heavily in strengthening our partnership with Mexico. The High Level Economic Dialogue meetings this week are an important part of the long-term effort to build institutions and practices which deepen our cooperation in fortifying the security and prosperity of both countries.

Earl Anthony Wayne last served as Ambassador to Mexico from 2011 to 2015 and holds the rank of Career Ambassador.  He is currently a Public Policy Fellow at the Woodrow Wilson Center working on an initiative to highlight the importance of North America for the United States. Follow him on Twitter @EAnthonyWayne.