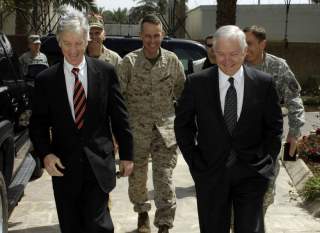 SINCE THE 9/11 attacks, the United States has waged major postwar reconstruction campaigns in Iraq and Afghanistan and similar but smaller programs in other countries that harbor Al Qaeda affiliates. Continued complex political, economic and military operations will be needed for many years to deal with the continuing threat from Al Qaeda and its associated organizations, much of it stemming from fragile states with weak institutions, high rates of poverty and deep ethnic, religious or tribal divisions. Despite thirteen years of experience—and innumerable opportunities to learn lessons from both successes and mistakes—there have been few significant changes in our cumbersome, inefficient and ineffective approach to interagency operations in the field.

We believe the time has come to look to a new, more effective operational model. For fragile states in which Al Qaeda is present, the United States should develop, select and support with strong staff a new type of ambassador with more authority to plan and direct complex operations across department and agency lines, and who will be accountable for their success or failure. We need to develop the plans to protect American interests and strengthen these countries out in the field, where local realities are understood, before Washington agencies bring their inside-the-Beltway perspectives to bear. Congress and the executive branch need to authorize field leaders to shift resources across agency lines to meet new threats. It is, in short, a time for change—change that upends our complacent and antiquated approach toward foreign societies and cultures.

THE 9/11 ATTACKS offered us a painful reminder of an old verity, which is that fragile states unable to enforce their laws and control their territory are the progenitors of potent threats that can be carried out simply and effectively. Such states provide safe havens from which Al Qaeda and its affiliates plan and launch terror attacks against the United States and other countries. Al Qaeda in the Arabian Peninsula (AQAP) operates in Yemen; Al Qaeda in the Islamic Maghreb operates across Algeria, Mali and other neighboring countries; and Al Shabab operates in Somalia. Civil war in Syria, spreading violence in Iraq and continued turmoil in Africa will most likely open new havens for similar groups.

Until now, the American response to the threat from fragile states has had three major components: First, we have greatly strengthened the control of our own borders. Second, American intelligence and military forces, particularly the CIA and the U.S. Special Operations Command, have taken the fight to Al Qaeda. Third, the United States, along with other countries and international organizations, has increased economic and civil assistance to many fragile states using existing programs and authorities.

How much have these approaches achieved? The American-led reconstruction efforts in Iraq and Afghanistan have been prolonged and massive, but cannot be considered successful.

A dysfunctional system of authorities and procedures hampered effectiveness. Plans were made in Washington by committees of the representatives of different departments and agencies; individual departments and agencies sent instructions to their representatives in the field; and the allocations of resources to country programs were based in large part on individual departmental and agency priorities and available funding, not on overall national priorities. Each of the departments maintained direct authority over its field personnel and resources. Short-term staffing was endemic and cooperation in the field was voluntary, with neither the ambassador nor any official in Washington below the president authorized to resolve disputes or set overall priorities. Budget resources for a particular program could not be shifted smoothly to others when local conditions changed, and congressional oversight was split among committees that oversaw only individual aspects of the overall program in a country.

Even when the president, the National Security Council and an energetic interagency process in Washington were fully engaged—as they were in later years in Iraq and Afghanistan—the results have not matched the commitment of resources. Numerous accounts by journalists and memoirs of participants have documented the interdepartmental frictions, inefficient bureaucratic compromises and delayed decisions that have hampered progress. The authors of this article know personally most of those involved in leading the long wars in Iraq and Afghanistan. They are to a person—whether military officers or civilian officials—diligent and dedicated patriots. They have often worked across departmental lines to integrate security, governance and economic-assistance programs to achieve real successes. However, when officials and officers in the field did not get along, the deficiencies of the system allowed their disputes to bring in-country progress to a halt. What is needed is an overall system that will make cooperation and integration the norm, not the exception.

YEMEN AND LIBYA provide smaller-scale but more contemporary illustrations of the shortcomings of today’s approaches. Although American officials have gained more experience, the authorities and procedures have not changed.

Yemen is the home base for AQAP, generally considered the most dangerous franchise of Al Qaeda. The speeches of American officials paint a picture of a comprehensive, balanced set of U.S. government programs not only to attack AQAP, but also to assist the current Yemeni government with both political and economic development. In congressional testimony in November 2013, for example, Deputy Assistant Secretary of State for the Arabian Peninsula Barbara Leaf emphasized American “support for Yemen’s historic transition and continued bilateral security cooperation.” She mentioned the $39 million that the United States had provided to support the national reconciliation process, U.S. encouragement of economic reform, its support for restructuring the Yemeni armed forces, and its participation in a weekly meeting among outside countries and international organizations to “compare notes, compare approaches, and coordinate tightly.” She said nothing of the American military and intelligence attacks on AQAP fighters, yet these actions are the most costly U.S. programs dealing with Yemen, and they feature prominently in Yemeni popular opinion.

Even in this friendly hearing, however, the shortcomings of American and international programs were made clear. Congressman Ted Deutch noted, “U.S. assistance to Yemen totaled $256 million for Fiscal Year 2013, but these funds come from 17 different accounts, all with very different objectives.” He asked a fundamental question that went unanswered: “What exactly is our long-term strategy for Yemen?”

The view on the ground in Yemen is considerably darker. Two weeks before Leaf’s testimony, an op-ed in the Yemen Post under the headline “Law of the Jungle in Yemen” stated:

People have lost hope in the National Dialogue. . . . Billions of US dollars are still looted in the poverty stricken Yemen with not one corrupt senior official prosecuted. . . .
Laws are only practiced against the weak and helpless. . . . An internal war is ongoing in the north of Yemen. . . . Al-Qaeda is regrouping and seeking to become a power once again . . . Safety and security in Yemen is nowhere to be seen. Government authority and presence over many parts of the country is limited, and where they are present they are almost useless.

U.S. policy in Yemen has been cobbled together in Washington through the typical interagency process. Because congressional funding for counterterrorist programs, both military and intelligence, is still flowing relatively freely, they are the largest American programs in Yemen. According to press reporting, there are two independent task forces—one military, one CIA—operating drones over Yemen, and U.S. security assistance to the Yemeni armed forces is focused on the creation of small, well-trained counterterrorist forces. The Saudis and other Gulf Cooperation Council (GCC) states have promised over $3 billion in economic support to Yemen. American economic assistance to Yemen is a small fraction of this amount; thus, the American plan must leverage the greater GCC contribution. The overall picture in Yemen, then, is one of unbalanced, uncoordinated and suboptimal U.S. and international programs based on no coherent plan.

Libya is another excellent illustration of an American assistance program that is not meeting the needs of the country. American commitment of financial resources to assist Libya has been modest: the State Department estimates about $240 million since the beginning of operations to oust Muammar el-Qaddafi in 2011. Far more money was spent by the United States on the NATO air operations that pushed Qaddafi out of power. American assistance to Libya has been spread across different government programs, depending on the other bills for those programs in the rest of the world. With few resources at their command, the country team needed an integrated plan to make the actions they could take effective, to set priorities and to leverage the actions of other countries. Yet the various American agencies working in Libya, as usual, cooperated as best they could, under no integrated plan, with little experienced leadership either in Tripoli or Washington. As crises occurred and conditions deteriorated, responses were improvised.

Like Iraq in 2003, Libya was coming out of a long and brutal dictatorship. Rebuilding the country would require extraordinary actions by the Libyans themselves and by outside countries like the United States that had helped bring down Qaddafi and had a stake in a favorable outcome. International security-support programs, including those by the United States, have been notably weak. Any doubt about the conditions on the ground ended when Ambassador J. Christopher Stevens was murdered in Benghazi in September 2012, the first U.S. ambassador to die in the line of duty since 1979. Yet it was over another year later that the United States and several other European countries began belatedly to take actions to strengthen the army and police. NATO began a program to train about twenty thousand Libyan soldiers. The program is not scheduled to be completed for many more months, and the result will be trained soldiers who perform their duties with mostly inadequate medical, communications and logistical support.