The Flags We Fly: Why Iranian Athletics Have Chosen Values Over Success 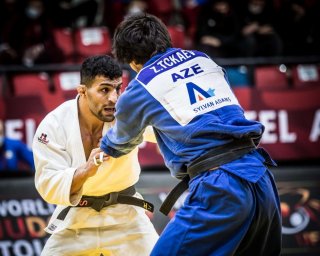 When humans gather for a common cause, there is generally a flag to represent whatever has brought them together. Ironically, though, this is not the case when the thing that brings them together is humanity itself. This leads me to wonder whether flags are really about unity, or if they have more to do with dividing one group against another.

In the five-ring banner of the Olympic Games, I see the closest resemblance to complete global unity that humanity has ever achieved. Every two years, a colorful sea of athletes and spectators flows to one location from all corners of the world. The spectacle inspires and challenges us to ask: If sport can truly bring forward the best of us, why do we need other means to express greatness?

The Olympic Games have occasionally tested our understanding of unity, that perhaps there is more than just being ”Faster, Higher, and Stronger.” As long as states will decide over the rules of engagement—even in sports—participation or boycott will be translated to posturing for domestic audiences or flexing their diplomatic muscle. But at the end of the day, one message will come through the loudest: human rights matter.

Far into the future, I’m sure that there will be parades and colorful crowds with numerous flags marching down the stadiums. But every time, when the shadow of remonstration looms over the Olympic flame, many athletes will surely feel like Jesse Owens during the Munich Games in 1936 when stepping up the podium and bowing to receive the medal.

As a child, I used to daydream about becoming a great athlete. People like Gholamreza Takhti, the historic Iranian wrestling icon whose chivalrous behavior and sportsmanship won him millions of hearts as well as a few gold medals, were role models for my development, not just as an athlete but also as a person.

As a teenager, when I was drawn to soccer, I changed idols but not values. And when I became part of Iran’s national team, I resolved to represent those values and to honor fellow athletes who had done the same.

In 2008, I met the Portuguese soccer star Eusébio da Silva Ferreira during a visit to the European Parliament in Brussels and was able to tell him that everyone in Iran admired him for helping the deprived people of Mozambique.

Sports have never been immune to politics. Throughout history, corrupt statesmen have been using famous athletes, celebrities, and events to beg for credibility. It was a practice I witnessed in my own country under two dictators and strove to oppose.

When I became a professional soccer player, the shah had appointed generals to lead the national sport organization and Colonel Hossein Soroudi led the Iranian Football Federation (IFF). The secretary of the IFF was Houshang Dideban, from Khuzestan’s SAVAK (secret police) branch.

My early displays of dissent were minor, but I felt proud of myself, speaking truth to power. When competing with my first professional club under the Shah’s regime, I refused to kiss the queen’s hand during a meeting with the national team. In 1976, during a staged game with the shah’s son, Reza Pahlavi, I angered him by refusing to lose a penalty shoot-out against him. I’m sure he still remembers the incident because he almost ran over several players with his super expensive Blazer car after the game.

After the 1979 revolution, when I learned that serving the flag will never equal serving my people, I went into exile and studied psychology in the United States. Though I remained obsessed with sports and began thinking a great deal about its effects on our minds and our lives. I soon came to realize that the ordeal of competition can bring out both the best and the worst of human beings’ relationships with ethics, fairness, respect, anger management, collaboration, rivalry, and yearning to stand out.

I had left the sport and there was no flag to claim, but I still had another match to overcome. My destiny was being shaped by developments thousands of miles away, in my home country.

In Iran, the fundamentalist leaders of the Islamic Republic erased the value of merit by creating a situation in which loyalty to the regime was the main determinant of success. Under the mullahs, defiant athletes either fled the country or were arrested and killed. Stars like Habib Khabiri, and Mahshid Razaghi (soccer), Forouzan Abdi (Volleyball), Hooshang Montazeralzohoor (Greco-Roman Wrestling 1976 Olympic), Shahla Shahdoust (Table Tennis), and Navid Afkari (wrestling) literally decorated Iran’s horizon. As a result, Iran has lost more accomplished competitors than almost any other country on the planet; a world record at last.

Self-exile ended the careers of many Iranian athletes, but the best among them realized that their values were more important to their legacy than their competitive accomplishments. The best of those accomplishments might turn a person into an idol for a generation or two, but inevitably they will be eclipsed by someone else. But athletes who win the public’s hearts become legends and representatives of a new culture.

Habib Khabiri, my dearest friend and captain of Iran’s national soccer team, was arrested by the regime and pressured to deny his beliefs and denounce the organization he was affiliated to. Habib was fully aware of how to preserve fate over faith, but he refused to do so. I believe he was thinking about those millions of young hopeful eyes who had trusted him and wanted to follow in his footsteps. He didn’t want to fail them and a legend he became.

As a former athlete, once you have out-checked your career bucket list, you are faced with a few options left: some strive to immerse their shelves with more medals and awards, some look to enrich their Wikipedia page, and there are those whose fame brings shame.

Through life, we fly many flags and attach our accomplishments or failures to them. I decided to follow in Habib’s footsteps and pick up his fallen flag... but for those millions of young boys and girls who are daydreaming about the podiums to climb and the medals to claim, I’d say: “The race to success is congested and joy belongs to a few. But if you devote yourself to humanity, you can bring joy to many and you’ll race with destiny, you’ll feel eternity and, in the end... you will be free.”

Hassan Nayebagha is a former member of the Iranian National Soccer Team and a current member of the National Council of Resistance of Iran’s Sports Committee.