Focus on the Refugees Still in the Middle East 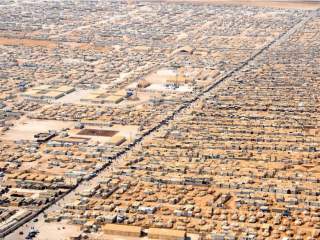 When it comes to the ongoing refugee crisis, much of the West's attention has turned to those refugees landing on European soil. What is often forgotten, however, is that the majority of Syrian refugees remain in the surrounding countries of Turkey, Lebanon and Jordan. As countries, NGOs and aid agencies prepare to meet in London for another Syria donors’ conference on February 2, they are going to have to rethink their approach. This crisis, which is likely to worsen in the coming months, needs a new strategy.

We recently returned from Jordan, where we were able to visit the sprawling Zaatari Camp that houses eighty thousand refugees as well as urban centers where many refugees are residing. The scope of the crisis is staggering. More than thirteen million Syrians are vulnerable or displaced inside the country. Over four million Syrian refugees have fled to neighboring countries. But no one should assume that is the end of the story. In fact, there are already signs that the refugee crisis is worsening.

During our visit, refugees from cities south of Damascus described how they used to seize on a few hours of respite between Assad’s barrel bombs, which often were dropped from a single plane. But with Russian planes now flying deeper into Syria’s southern tip, the bombing runs are now constant. Families are now left with no window to seek aid or move freely around cities like Dara’a.

Desperate to escape, refugees are now fleeing to a remote border crossing near Rukban, where Syria, Jordan and Iraq meet, and where they have heard Jordan is permitting small numbers of refugees to enter. Unfortunately, the wait to cross can take months, and virtually no infrastructure exists to support the sixteen thousand refugees that have gathered there.

The situation in the North around Aleppo is similarly grim. There, Russian planes and Syrian forces have aggressively targeted rebel forces, which have held large swaths of Aleppo for years. If those efforts succeed, Turkey could very well see another half a million refugees move towards its border. As for the rest of the country, one senior international official in Jordan noted that if the Vienna process fails to create a ceasefire and accompanying political process, it could trigger a new wave of asylum seekers from across Syria.

Coping with the existing crisis and preparing for these additional scenarios requires a number of urgent steps. First, Europe, the United States and Gulf allies need to allocate more resources—much more. Donor response has been woefully inadequate. Last year, the UN raised $3.3 billion for Syria. That’s $5.1 billion less than the $8.4 billion annual appeal. In 2014, the shortfall was $4.2 billion. Tragically, as the crisis worsens, the gap between humanitarian need and donor supply is only widening. To make ends meet, relief organizations have been forced to cut benefits to all but the most vulnerable caseloads. Last year, some UN agencies were forced to cut their assistance almost in half.

Unfortunately, humanitarian assistance alone is unlikely to staunch the bleeding. Refugees are leaving Jordan, Turkey and Lebanon in search of livelihoods. Years in camps or host communities with zero prospects of work have left them with depleted savings and dependent on inadequate aid programs. To contain the crisis, Syrian refugees must see some future for themselves in the region where many of them want to stay. Most of the refugees we met in Jordan were not asking for charity, but just a chance to reclaim their dignity and provide for their families. Host countries are understandably reluctant to open their labor markets to the refugees. Governments fear the Syrians will take jobs away from already resentful citizens and strain social cohesion to the breaking point.

One option would be to give the refugees the right to compete for jobs already filled by guest workers. Take the case of Jordan, which currently hosts some 630,000 refugees. According to the government, there are approximately 330,000 migrants working legally in Jordan, mostly from Egypt and Asia. These migrants are largely employed in low-skilled jobs in manufacturing, agriculture and construction.

Jordan should issue permits to Syrian refugees to work in these sectors. The government just agreed to let four thousand Syrians enter the garment and agriculture sectors—a decision we should applaud. But this program should be scaled up quickly to include all sectors open to guest workers. Others in the region should follow suit. The Gulf States host over twenty-two million migrant workers. These countries also claim to have let in some two hundred thousand Syrian migrants since the conflict began. Doubling that number would be a drop in the bucket of the Gulf’s annual migrant-worker quota.

Education is the other key to success. The refugees we interviewed in Zaatari said this was their top priority. There are two million Syrian refugee children in the neighboring countries. Increasingly, they are forced into child labor or marriage. Lebanon has pioneered a program of double-shift schooling to accommodate refugees. Both Turkey and Jordan have plans to dramatically increase the number of refugees in school. The goal is to get one million Syrian refugee children in these countries into the classroom in 2016. To do so, the London conference will need to raise $500 million. Those resources will need to be paired with a jobs plan, though, so that families aren’t forced to choose between sending their children to school or sending them to the streets to collect bottles and cans.

If the West is going to pressure the region to open its labor markets and schools, donor countries must show a willingness to open their own borders. The United States has been the biggest humanitarian donor to the Syrian crisis. We must continue to show leadership. Last year, a bipartisan group called for the U.S. to admit an additional hundred thousand Syrian refugees and to allocate an additional two billion dollars in assistance. Congress and the administration should act to do so now. We should then leverage this commitment by reaching out to our Gulf partners to help fund the remainder of the UN appeal.

Finally, governments and NGOs should partner with the private sector to innovate in providing assistance to refugees. In Jordan, UNHCR has piloted a program together with local banks to distribute cash directly to the refugees using iris scan technology at ATM machines. This enables UNHCR to carry out “presence checks” to confirm that those allocated resources are actually receiving them. Today, the majority of refugees in Jordan are relying on this technology. UNHCR is also experimenting with a “Cash on Wheels” program that brings the ATMs right into the camps in a van. Such innovations bring greater efficiency and dignity to the distribution of assistance. Donors and aid agencies must reach out to the private sector to better leverage the power of technology in providing assistance.

Next month’s donor conference in London cannot be business as usual. For too long, relief agencies have been forced to cobble together a response to the world’s biggest humanitarian crisis on shoestring budgets. This must change if we are to turn the corner this year at London. Livelihoods and education for the displaced should be top priorities for both donors and host countries alike. If you want to know why, just ask a Syrian refugee.

Hardin Lang is a senior fellow at the Center for American Progress. He previous served at United Nations in Afghanistan, Central America, the Balkans, and Iraq. He was head of office for former President Bill Clinton in his role as the UN special envoy for Haiti and helped to launch UN stabilization in Mali. Julianne Smith is the Director of the Strategy and Statecraft Program at the Center for a New American Security. She is the former Deputy National Security Advisor for Vice President Joseph Biden.