Follow the Money: The Israel-Boycott Movement and Its Accomplices 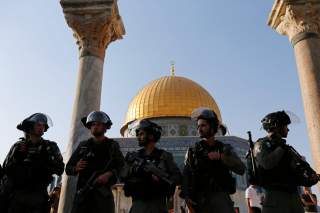 U.S. banking giant Comerica’s closure of an account earlier this year held by an organization that wages legal and economic warfare against America and Israel may be the harbinger of a successful strategy against BDS.

BDS—or the Boycott, Sanctions and Divestment movement—is a global effort that seeks to isolate the Jewish state from the international community in order to secure a Palestinian state by endangering Israel’s existence. BDS seeks a one-state solution rather than an Israeli and Palestinian state living side by side in peace. Our research shows many BDS organizations are entwined with states and other entities that advance hate groups and terrorism at large.

Dallas-based Comerica said in May that it closed the account of the International Association of Democratic Lawyers, also known as IADL, due to a “business decision.” Texas Gov. Greg Abbott’s signing into law of an anti-BDS law in early May set the stage for the shutdown of the anti-Israel organization’s account

Months of growing pressure on the bank from Texas politicians, human-rights groups and the prominent Harvard jurist Alan Dershowitz certainly played a role in Comerica’s calculus.

The IADL is part and parcel of a dangerous, growing BDS cottage industry in the West.

The Comerica example is very positive and should be expanded in North America because these kinds of measures have not been taken en masse in contrast to Europe, which has made a significant effort to shutdown bank accounts and freeze the assets of BDS perpetrators.

Many financial institutions are coming to understand the risks associated with providing accounts to BDS groups. Banks across Germany, Austria, Ireland and France pulled the plug on BDS accounts. Commerzbank, Germany’s second largest bank, was the first bank in the Federal Republic to shut a BDS account.

Austrian bank BAWAG closed the account of the Austria-Arab Culture Center in Vienna, which had hosted an event featuring convicted Palestinian terrorist Leila Khaled, who participated in the 1969 hijacking of a TWA jet. A year later, she sought to hijack El Al flight 219. Khaled was in Europe as part of a speaking tour. The Austria-Arab cultural center advocates BDS.

Yet many banks continue to provide account services to BDS organizations.

Allied Irish Banks picked up the Palestine Solidarity Campaign account and may face greater scrutiny now that the bank is partially privately owned. Spanish bank La Caixa has declined to shut the European account of the International Association of Democratic Lawyers.

The interplay between terrorism finance and BDS is perhaps best illustrated by BDS South Africa—the so-called “mothership” of the anti-Israel campaign.

In 2015, Farid Esack—an Islamic theologian and head of BDS South Africa— held a series of fund-raisers with Khaled, a member of the Popular Front for the Liberation of Palestine, which the United States and the EU have classified as a terrorist organization.

After the privately owned Austrian Hotel Arcotel canceled a BDS event with Esack in June, the Austrian-Arab Meeting Center (ÖAB) in Vienna hosted his event. The center has an account with Erste Group Bank.

The horrific murder of a protester by a neo-Nazi in Charlottesville presents another window into the unsavory BDS world. The neo-Nazi website the Daily Stormer, which was an advocate of the fascist protesters in Virginia, has long been a supporter of BDS.

The German neo-Nazi party Der Dritte Weg (The Third Way) uses PayPal to raise funds for its BDS activities. The group labeled Israel a “terror state” on its website. Members of the Der Dritte Weg can be seen on the website at the Hezbollah propaganda museum in Mleeta, Lebanon. The United States considers Hezbollah a terrorist organization, while the EU merely labeled its so-called military wing a terrorist group.

According to a German intelligence report, The Third Way increased its membership in the state of Saxony in 2016. PayPal has taken the position that The Third Way’s activities do not violate its anti-hate policies.

Financial services providers are exposing their organizations to great risk and reputational damage by providing accounts to BDS organizations. Nearly half of America’s states have taken measures against BDS. Potent federal legislation is set to be passed. And states are starting to name and shame companies on public lists for their support of BDS.

The ball is in the court of PayPal, BNP Paribas, Allied Irish Banks, La Caixa and others. If they want to be on the right side of history, and of their own long-term financial interests, then they should stop providing services to organizations with a clearly genocidal agenda.

Benjamin Weinthal is a fellow for the Foundation for Defense of Democracies. Asaf Romirowsky is the executive director of Scholars for Peace in the Middle East (SPME) and a fellow at the Middle East Forum.