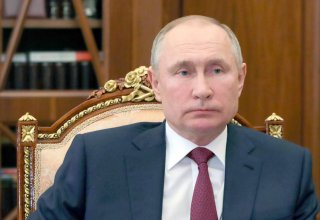 What does America’s most notorious conspiracy theory have to do with foreign policy? Quite a lot, it turns out.

In recent years, QAnon—a series of theories about the existence of an unaccountable “deep state” within the U.S. government—has garnered growing attention in U.S. politics, and concern from American law enforcement. Officials and experts alike now worry that the movement, while fringe, has contributed to significant radicalization on the part of some segments of the American electorate. Yet, while QAnon is a homegrown phenomenon, its ideas and narratives are being amplified by a host of foreign actors, according to a new study by The Soufan Center.

The report, entitled Quantifying the Q Conspiracy, notes that in 2020 foreign influence accounted for some one-fifth of all QAnon-related posts on Facebook. Spikes in foreign-generated posts “can be correlated with events in the United States; respectively, the domestic outbreak of the COVID-19 pandemic, the Wayfair Conspiracy, and the Presidential Election,” it outlines. “Throughout 2020, the consistent foreign amplification of QAnon narratives online illustrates that externally driven disinformation efforts have contributed to the efficient spread of conspiracy theories.”

Which foreign actors are behind this disinformation? The most prominent players are Moscow and Beijing, according to the Soufan study. “While Russian administrators dominated the foreign influence space within online QAnon narratives in the first half of 2020, China began to rapidly expand its disinformation campaign by March of last year,” the report notes. “This timing coincides with increasing political tensions between the U.S. and China owing to a number of issues, including the spread of the coronavirus, human rights abuses, and other ares [sic] of contention.”

Increasingly, however, other foreign actors are also getting into the game. “Saudi Arabia and Iran are also using QAnon-narratives as a vehicle to spread disinformation—efforts that are increasing in 2021 compared to 2020,” according to the study. “QAnon-themed posts originating from Saudi Arabia and Iran accounted for 14% of foreign influence categorized posts in 2020; a figure that increased to 20% between January 1, 2021, and February 28, 2021.”

That finding sheds light on an unfolding and deeply alarming—fact: the use of disinformation as a strategic weapon is proliferating.

Just how much is still poorly understood? To be sure, a torrent of “fake news” in recent years has made Western publics increasingly aware of the disinformation phenomenon. By and large, however, coverage of the issue has focused on things like Russia’s attempts to influence elections in the United States (and in other Western nations), or China’s large-scale disinformation campaign surrounding the coronavirus pandemic. Yet, as the Soufan study underscores, the number of countries active in the disinformation space is rapidly expanding.

Iran, for instance, is well on its way to weaponizing “fake news.” In the early months of the coronavirus pandemic, the Islamic Republic was found to be collaborating with Russia and China to push out a systematic campaign of propaganda aimed at the United States and the West. The country’s clerical army, the Islamic Revolutionary Guard Corps, has been tied to what U.S. officials have termed a “worldwide disinformation campaign” designed to propagate “fake news” and regime-approved propaganda. And, most recently, the Iranian regime was implicated in attempting to influence Scottish voters ahead of the country’s parliamentary elections earlier this month as part of its efforts to weaken the British government.

Saudi Arabia has also gotten into the disinformation game. In addition to a massive official propaganda push designed to obscure the details of surrounding the 2018 killing of journalist Jamal Khashoggi, the House of Saud has also been accused of erecting a state-sanctioned “troll army” to flood social media platforms and shape broader political narratives in the Middle East.

Such activism represents a new, and troubling, normal. Today, a growing number of authoritarian regimes are turning to technology in their efforts to demolish trust in democratic principles and institutions. This trend should be deeply troubling for open societies that depend on the free flow of reliable facts in order to shape national conversations. It is precisely that reliability which Russia, China and others are trying to undermine as a way of stifling democratic debate.

Put another way, Russia’s Vladimir Putin, China’s Xi Jinping and a growing cohort of other world leaders want precisely what 1960s counterculture icon Timothy Leary did: for Americans to “turn on, tune in, and drop out.”

Ilan Berman is Senior Vice President of the American Foreign Policy Council in Washington, DC, where he directs the Council’s Future of Public Diplomacy Project.