Foreign Aid Should Be Part of an "America First" Policy 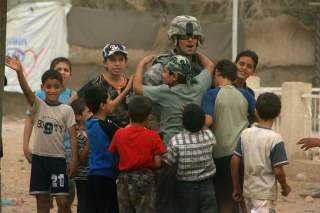 Secretary of State Rex Tillerson has reportedly bought time “to do a deeper analysis of foreign aid” in the face of President Trump’s proposal to slash funding for the State Department and the U.S. Agency for International Development. The proposed cuts of 30 percent or more are the product of an “America First” budget that frames the issue of foreign assistance as a choice between nation-building at home and nation-building abroad.

Whether Trump’s proposed cuts are an act of creative destruction, as some hope, or just plain destruction, as many fear, remains unclear. But what is clear is that Tillerson now has an opportunity to debunk the zero-sum view of foreign aid, and complete its transformation from what was once derided as an element of soft power into a smart power instrument of national and economic security.

This transformation began under George W. Bush, whose administration launched ambitious initiatives on AIDS, malaria, human trafficking, food security, global peacekeeping, anticorruption, entrepreneurship and girls’ education, among other things. In so doing, President Bush transformed the way in which foreign assistance was conceived, used and delivered.

He shifted the foreign-assistance debate from a question of inputs (How much should we spend?) to outcomes (What result should we seek, and how do we achieve it most cost effectively?). He replaced the paternalistic, donor-recipient paradigm with “a new compact for development,” based on partnership between rich and poor nations, and shared accountability for results. And he harnessed this approach to innovative delivery mechanisms to ensure that new wine would not end up in old bottles.

Instead of expanding the earmark-hobbled USAID, he launched the Millennium Challenge Corporation (MCC), aimed at spurring economic growth by conditioning aid on countries acting—not merely promising—to crack down on corruption, invest in the health and education of their people, and promote economic freedom. As a result, the MCC gets double the bang for its development buck, accelerating change in countries that have earned it while incentivizing change (the “MCC effect”) in those eager to qualify for it.

Taking aim at the AIDS pandemic, he launched the President’s Emergency Plan For AIDS Relief (PEPFAR), the largest commitment ever by any nation to combat a single disease. PEPFAR’s results-oriented approach has already prevented 11.5 million new infections, saving $200 billion in treatment costs, while leveraging U.S. dollars 2:1 through the Global Fund to Fight HIV/AIDS, Tuberculosis and Malaria.

Bush also put human trafficking on the agenda of the UN General Assembly, launched an initiative to loosen malaria’s grip on Africa’s children and unleashed new sources of private capital, such as remittances from immigrants, to finance global development.

A coalition of strange bedfellows coalesced around this agenda. Washington’s Cardinal McCarrick and Bono flanked the president when he announced the Millennium Challenge Corporation. Conservatives, like Jesse Helms, joined Senate liberals, like John Kerry, in supporting AIDS legislation. Secular and faith-based NGOs, from World Vision to Save the Children, made common cause, while generals and evangelicals found common ground.

Unfortunately, this coalition frayed under the Obama administration, which alienated activists by flat-lining funding for PEPFAR, and the right by promoting reproductive rights under an ill-defined Global Health Initiative.

But it was Iraq, the rise of the alt-right, and the Trump campaign that finally eviscerated the Bush-era coalition. These forces, together with isolationist Tea Party Republicans, have effectively painted all of foreign assistance with the broad and pejorative brush of nation-building.

Moreover, while foreign assistance still accounts for less than 1 percent of the U.S. budget, and economic and development assistance barely two-thirds of that, the president and the alt-right have fueled the erroneous belief, now held by a majority of Americans, that it consumes 25 to 30 percent. As a result, the forces that swept Trump into the White House have successfully framed the issue of foreign aid as a zero-sum game, an either/or choice between the child in South Dakota and the child in South Sudan.

This is a false dichotomy. Notwithstanding Trump’s avowal to make America great again, the mark of a great nation is that it does not choose between the child at home and the child abroad—it helps both, as Gen. George Marshall’s plan proved in the wake of World War II.

But doing this requires an approach that is both big hearted and hard headed. While Bush’s compassionate conservatism pioneered this, Tillerson’s fresh look is welcome, for the Bush-era institutions are in need of further reform. These reforms should translate lessons learned into a smart-power strategy focused on nation enabling, not building.

Instead of neglecting USAID, as we arguably did, or prioritizing it at the expense of other agencies, as Obama did, this new strategy should restructure it. Results-oriented activities, such as disaster relief and humanitarian assistance, at which USAID excels, should be scaled up. Early investments in fragile states, which pose a potential security threat, should be pursued, bypassing corrupt despots with cash-based aid and incentives for private firms to build functioning economies. And USAID’s Global Development Lab should continue its proof-of-concept efforts focused on new business and delivery models.

At the same time, USAID programs that are better scaled up by social entrepreneurs and innovative private sector technologies, such as education and water, should be pared back or eliminated. Its development credit programs should be transferred to the financially oriented Overseas Private Investment Corporation, while its economic reform activities should be transferred to the growth-oriented Millennium Challenge Corporation.

In turn, funding for the business-like MCC should be increased so it can realize its objective of transitioning countries from aid-driven development to private-sector driven growth. And, in lieu of USAID grants, a revolving loan fund should be created at OPIC to support nonstate actors that create financially sustainable models for delivering social services, such as the Aga Khan Development Network.

PEPFAR should be reauthorized, so Trump can finish what Bush began. In three of the most afflicted African countries, PEPFAR’s success in putting people on treatment has so slowed the spread of HIV/AIDS that a tipping point has been reached where new infections are now declining; so, too, will response costs, which over time can be borne less by us and more by the countries themselves.

By vigorously staying the course, this tipping point, which marks the beginning of the end of the pandemic, can be reached by the other seven PEPFAR countries within Trump’s first term. With the prospect of decreasing costs and increasing lifespans, fully funding PEPFAR is a compelling investment proposition.

Finally, just as Trump has pressured NATO to share more equally in the common defense, this new strategy should put burden sharing for global development squarely on the table of the G20. This group includes Brazil, Russia, India and China (the BRICs), which account for one-third of global GDP, but whose global giving—combined—barely approximates U.S. development assistance alone.

Indeed, Russia’s foreign assistance is roughly equal to that of Greece, which left Putin, as I vividly recall, leafing through papers and murmuring to staff at G8 summits, while other leaders debated how to combat corruption or confront the latest humanitarian crisis.

China, in contrast, provides substantial assistance, but conditions its aid on the right to exploit natural resources. As for other G20 countries, India’s giving is about the same as Portugal’s, while several do not even disclose their foreign assistance.

If these countries want to reap the rewards of the international system, they must also bear the burdens of that system. This means becoming responsible, rules-based and transparent donors. And because there is no development without security, they should also bear a greater share of the cost of global peacekeeping. Simply put, if China wants to extract Africa’s natural capital, then we should insist that they and others do their share to protect Africa’s—and the world’s—human capital.

This smart power strategy, v.2.0, would likely be supported by the Bush-era coalition, as well as others. The faith-based right and activist left would see it as a matter of conscience and an expression of American ideals at a time when those ideals are in doubt or under threat.

Businesses, whose rent-seeking has propelled them into frontier and emerging markets, would support it as a matter of economic self-interest, recognizing that healthy, prosperous consumers abroad promote prosperity at home.

“America Firsters” would see in this results-oriented approach an end to zero-sum thinking, as the paring back of marginal programs and the leveraging of private capital and G20 resources frees up funds for new local and global investments alike.

Isolationists and xenophobes, in turn, would see this strategy as a way of ensuring that potential migrants are lifted out of poverty and disease within their own borders, before seeking refuge across our borders.

And, finally, with impoverished nations increasingly falling prey to conflict from within and terror from without, the national-security community would see this more muscular approach to foreign assistance as a low-cost alternative to the military for ensuring global peace and stability. As Gen. James Mattis put it before becoming secretary of defense, “If you don’t fund the State Department, then I need to buy more ammunition.”