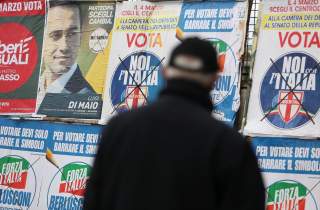 With Italy’s general election coming on March 4, all eyes are turning to Rome. Pollsters have not discerned strong views on what the election really holds for Italy. It’s not at all clear whether what awaits is a scenario dominated by mainstream parties, one where antiestablishment actors like Beppe Grillo’s Five Star Movement or Northern League hold sway, or even a hybrid, totally unprecedented scenario.

A piece for Foreign Affairs by former U.S. vice president Joe Biden first drew the attention of international observers towards the risk that foreign powers could tilt the balance. For Biden, a “Russian effort is now under way to support the nationalist Northern League and the populist Five Star Movement in Italy’s upcoming parliamentary elections.” Other reports by the Atlantic Council and the U.S. Senate Committee on Foreign Relations further reinforced the view that Italy is dangerously exposed to foreign meddling—by Russia in particular.

Concerns about geopolitical nudging in Rome are common today—and hardly a surprise in Italy, given that much is at stake: more than €2 trillion in government bonds, and an important seat at the table at which the fiscal and political fate of the whole EU will be decided.

Most, if not all, of the reports about foreign interference in Italy seem to focus on social media and fake news. While these are important, new and insidious issues, there is a risk that discussions about Russian trolls deflect attention from the proverbial elephant in the room: the way political parties are funded. It is glaringly relevant to note that, in the wake of a 2013 reform on this matter, foreign financing of Italian parties is not just possible, but legal. And with most Italian parties seeing their lowest popularity in history, the prospects for massive popular funding remain slimmer than slim. Substantial cash is needed, and quickly. Italian corporates may fill that gap, but the risk of protracted criminal investigations and nasty media headlines are a powerful disincentive for Italian entrepreneurs to pump cash into Italian parties.

Foreign patrons, meanwhile, need not be so sensitive. Clearly, the “opportunity” is not one for Western listed blue-chip companies, as these are mostly compliance-obsessed organizations which face all sorts of scrutiny from watchdogs and minority investors across the globe. Think authoritarian. Think China, Russia and Iran—the club of “geopolitical gentlemen.”

Has the case of an Italian MP on Azerbaijan’s payroll to wield influence at the Council of Europe made waves? That’s nothing compared to what’s next: entire parties for sale, and all legally. Very few antibodies exist within the Italian legal system. Section 246 of the Italian Criminal Code—introduced almost a century ago, under fascism—vaguely foresees sanctions, albeit mild ones, for “the citizen who takes foreign money to commit acts against the Italian national interest.” While the 2013 reform of party funding is rather stringent on domestic funding, it is totally silent on foreign funding. Has an unintentional loophole been created? If so, why have parliamentary calls to introduce a ban on foreign party funding in Italy gone unanswered? Has there been will in the government (which, at the time, was led by Enrico Letta) to explicitly allow foreign funding? Whatever the reason, it was a mortal error.

In fact, for authoritarian sponsors, the “price” of an Italian party is trivial, but the prize is not. Authoritarian sponsors do not face moral dilemmas at all, and foreign-policy agenda items may thus leap from deep sleep to center stage, given the growing tendency for Italy’s fractious political parties to have a plethora of foreign friends, partners and patrons.

Italian parties are well positioned to make the case against international sanctions in Brussels, and weigh in on NATO deployments and other important subjects, such as the definition of strategic sectors and reciprocity rules that matter to some powerful states today. On top of that, whoever controls the pro tempore Italian majority party can appoint the CEOs of Italian state-owned giants such as ENI or ENEL, which have broad international asset portfolios. Investing in Italian parties has never been more fun.

Francesco Galietti is the founder of Policy Sonar, a Rome-based political risk firm, and a former senior counsel at the Italian Ministry of Finance. His book Sovranità in vendita, on foreign meddling and Italian party funding, has just hit the shelves.