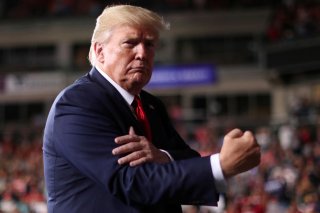 Ever since the whistleblower complaint from inside the CIA first surfaced against President Donald Trump, a steady stream of national security and State Department officials have testified about their consternation at his dealings with Ukraine. The dominant impression that they have left, however, is that they are blurring the line between what constitutes unsavory behavior when it comes to pressuring Ukraine for information on domestic political opponents, on the one hand, and what are legitimate policy disagreements. Indeed, it appears that they are, more often than not, substituting their own political judgments for the president’s when it comes to the conduct of American foreign policy—something that should concern Democrats as much as Republicans. A whole caste of government officials seems to believe that for an American president to aim to improve relations with Russia is an illegitimate, even treasonous, aspiration.

Today was no exception. Consider the testimony of State Department official Catherine Croft. In her brief opening statement, she declared, “As the Director covering Ukraine, I staffed the President's December 2017 decision to provide Ukraine with Javelin anti-tank missile systems. I also staffed his September 2017 meeting with then-President Petro Poroshenko on the margins of the UN General Assembly. Throughout both, I heard—directly and indirectly—President Trump describe Ukraine as a corrupt country.” The implication was that Trump had no business complaining about corruption in Ukraine. But why not? The persistence of corruption, which President Volodymyr Zelensky was elected by an overwhelming majority to combat, is hardly a secret.

Perhaps even more revealing was Croft’s declaration to the House Intelligence Committee that in November 2018 the White House refused to approve the release of a statement condemning Russia for seizing three Ukrainian ships located close to Crimea. It sounds damning at first glance. But once again, why shouldn’t Trump have practiced restraint in this instance if he was intent on improving relations with Russia, a platform that he was elected on? As it happens, the Zelensky campaign depicted the ship incident as a political provocation on the part of the Poroshenko government.

The implicit assumptions that appear to guide these veteran members of the bureaucracy were even more obvious in the case of Lt. Col. Alexander S. Vindman. As the media has underscored, he is the first person to testify in the impeachment inquiry who participated in the July 25 phone call between President Donald Trump and Ukrainian President Volodymyr Zelensky. Initially, Trump’s defenders sought to portray him as guilty of “espionage” or dual loyalty because he emigrated to America as a toddler. But this was always preposterous. More telling is that Vindman, no less than Croft, epitomizes a mindset that seems to regard a deviation from the strictures of the foreign policy establishment as by definition unacceptable.

In his opening statement, Vindman declared, that Ukraine is a “frontline state and a bulwark against Russian aggression.” He added, “the U.S. government policy community’s view is that the election of President Volodymyr Zelenskyy and the promise of reforms will lock in Ukraine’s Western-leaning trajectory, and allow Ukraine to realize its dream of a vibrant democracy and economic prosperity.” But what if Trump has a different view of matters than the “U.S. government policy community’s view”? After all, Trump was elected in part on his explicit declarations that he would not rely on the experts who had plunged America into Iraq and Libya.

Consider as well the attention that Vindman has lavished upon Trump’s phone call with Zelensky. According to Vindman, portions of the call he considered important were not included in the document kept by the government that was released to the last month. This includes President Trump claiming there are recordings of former Vice President Joe Biden discussing Ukrainian corruption, and President Zelensky specifically referring to Biden’s son’s company, Burisma Holdings. The document released by the administration includes Zelensky talking about “the company” and Trump saying, “Biden went around bragging that he stopped the prosecution,” which is an interpretation of a video of Joe Biden describing how the Obama administration made firing Ukrainian prosecutor general Viktor Shokin a prerequisite for receiving foreign aid. Vindman’s recollection of the call does not change the substance of what was already understood. However, the changes in language are being portrayed as more analogous to Richard Nixon editing the White House tapes than the routine process that produced a routine document. “Lt. Col. Alexander S. Vindman, who heard President Trump’s July phone call with Ukraine’s president and was alarmed, testified that he tried and failed to add key details to the rough transcript,” blared the New York Times headline.

For two months, major media outlets have described the document as a “transcript,” as a shorthand term. But as the document, and TNI’s previous reporting makes clear, it is not a transcript in the strict sense of the term. “This is what’s known as a memorandum of conversation: MEMCON. It is a standard tool that is used throughout the government and the procedures can vary from agency to agency, or who your boss is. But generally, they’re all done about the same way,” explains Peter Van Buren, a former Foreign Service Officer in the State Department.

“In my own experience in government for 24 years it’s a pretty standardized practice. The idea is, for all sorts of reasons, most interactions are not recorded. Instead, they’re memorialized through this process of MEMCON. Typically, while there are many people who may be listening in or present at a meeting, someone (or sometimes two people) are designated as official notetakers and they take down the conversation. And they’re not trying necessarily to get an exact word-for-word account, but they’re certainly trying to get an idea for idea. And in many cases when you’re dealing at the White House level, they are getting it pretty much word for word,” Van Buren tells TNI.

As a participant on the phone call, Vindman would have been one of the early editors. As the process continued, officials higher than him made changes, just like the editor of a magazine would for a writer. The precise reasons for the changes are open-ended and probably unknowable. There exists no evidence that the changes were nefarious or anything other than mundane word choice. The document released to the public is the official U.S. government record of what happened.

John Marshall Evans, a former U.S. Foreign Service officer and Ambassador to Armenia, narrows down what should be the focus of this inquiry—and what it’s actually becoming. “The issue is indeed not one of policy, which the President can change, but of the purpose that was pursued in the July 25th call: whether it was in the national interest or a private gain,” he says. So far, no one has shown that Trump demanded that the Ukrainian government produce a specific result or fabricate evidence about the Bidens.

Speaker Nancy Pelosi is supposed to hold a House vote on the impeachment inquiry tomorrow, after a barrage of criticism from Republicans for moving forward without one. Whether the open hearings and public testimony will provide any more substance than a parade of national security bureaucrats ventilating their grievances about a president who sought to take a different course in foreign policy is questionable.