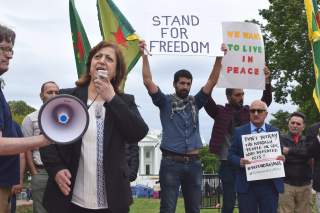 President Donald Trump’s Sunday announcement on Syria’s Kurds has created a furor at home and abroad. To deal with an unorthodox president, members of the Syrian Democratic Council (SDC) tried an unorthodox tactic—protesting in front of the White House itself.

Dozens of Kurdish-Americans, sympathetic activists, and reporters gathered in Washington’s Lafayette Park on Tuesday afternoon to hear a speech by Sinam Mohamad, co-chair of the SDC’s U.S. mission. (Under the SDC’s feminist ideology, every executive office is simultaneously held by one male and one female.) Mohamad directly asked Americans to call Congress to protest Trump’s decision.

“We are protesting today after the declaration of the United States that they will withdraw from the border of Turkey and Syria,” she said. “At the same time, we are seeing that Turkey is gathering all these forces at the border. They are threatening our people.”

“We have thousands of the ISIS detainees in our prisons. If this invasion happens, these prisoners will be a threat, a danger for everyone in the world,” she warned. “Erdoğan, they say he will be responsible for these ISIS fighters, which is really dangerous.”

“Turkish people who are inside Turkey, even under the threat of [Turkish president Recep Tayyip] Erdoğan, you know what he did inside Turkey. Not democracy, nor human rights, nor freedom there,” the Syrian Kurdish diplomat continued. “He wants to destroy the democratic system which we built together with all the people, with the Arabs, with the Syriacs, with the Kurds, with the Armenians.”

Tensions between Turkey and the Syrian Democratic Forces (SDF) are soaring after Trump announced Sunday night that “Turkey will soon be moving forward with its long-planned operation into Northern Syria.”

On Tuesday, he invited Erdoğan to the White House.

It was unclear what Trump’s statement meant. He followed up with another statement, similarly vague, threatening to “obliterate the economy of Turkey” if the country does anything “off-limits.” Within a few hours, Turkish forces bombed a crossing on the Syrian-Iraqi border and began to mass near Syria.

Northern Syria is controlled by the SDF, a U.S.-backed coalition of Kurds, Arabs, Syriac Christians, and other fighters opposed to ISIS. Al-Hawl, a prison camp in the SDF zone, holds seventy thousand former ISIS members that other countries are unwilling to take in. But the Turkish government considers the SDF an extension of the Kurdish separatist insurgency inside of Turkey.

Erdoğan has demanded control over territories now controlled by the SDF, proposing to resettle millions of Syrian refugees from Turkish soil there.

“Turkey supports Syria’s territorial integrity and political unity. Has no interest in occupation or changing demographics. The PKK/YPG did that northeast Syria,” Erdoğan’s spokesman wrote in an October 7 statement on Twitter, referring to the Kurdistan Workers Party (PKK) of Turkey and the Kurdish component of the SDF. “Time to correct it. Turkey fights against a terrorist organization that has also killed and oppressed the Kurds.”

The SDF, however, has threatened to fight any Turkish incursion into its territories.

It was initially unclear how many U.S. troops would remain with the SDF, and what areas they would allow Turkey to move into.

“Unfortunately, Turkey has chosen to act unilaterally. As a result we have moved the U.S. forces in northern Syria out of the path of potential Turkish incursion to ensure their safety,” Pentagon spokesman Jonathan Hoffman said in a Tuesday statement.

Turkish vice president Fuat Oktay said on Tuesday that “we determine our own path but we set our own limits.”

At the Washington rally, Mohamad clarified to the National Interest that U.S. troops have only left the seventy-mile “safe zone” between Ra’s al-Ayin and Tel Abyad. According to a Tuesday statement by Trump, there were only fifty U.S. troops in the area.

“They said, we are still in Syria, we are not leaving now, but they withdrew from the safe zone, the area which they have the agreement,” she said. “And they said, okay you have the right to defend yourself if anything happens.”

Under the safe zone deal reached in August, the SDF destroyed its fortifications along the border and allowed joint U.S.-Turkish patrols into its territory, in exchange for a U.S. guarantee against a Turkish invasion.

After Trump’s announcement, however, Mohamad said that the joint patrols have totally stopped.

Sinam denied that the SDC was talking to the Russian- and Iranian-backed central government of Syria as an alternative to U.S. protection: “Not yet, no. But we say we are ready. We are open to a dialogue.”

As unexpected as it was to see a diplomat leading a protest rally, Mohamad’s tactic of drumming up U.S. public opinion seems to be working. The SDF already has significant grassroots support in America.

Joshua Bailey, one of the activists at the protest, is a living symbol of many Americans’ sympathy for the SDF and the Kurdish independence movement. During the war against ISIS, he had traveled to Syria to join the SDF.

“The Kurds have been consistently pro-Western for decades,” he said. “They were being attacked by a shared enemy.”

“I understand a lot of Americans don’t want our military to be world police, but there’s a way to draw down military operations in a region that protect our allies and protect our national security,” Bailey stated. “There are ways to do it that endanger our security, put our allies at risk, and leave us in a weaker position against our adversaries. The president’s decision did the latter.”

Faced with the backlash, Trump seemed to backtrack.

“[I]n no way have we Abandoned the Kurds, who are special people and wonderful fighters,” he wrote on Twitter on Tuesday. “We are helping the Kurds financially/weapons!”