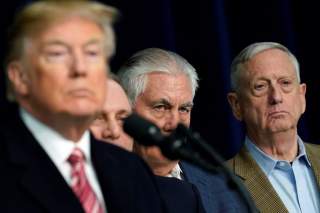 Defense Secretary Mattis’ recent official ushering in of the new era of great-power competition comes as yet more polls find that Western publics are resolutely rejecting the status quo in foreign policy. They confirm what many had highlighted for years, though with little recognition from mainstream political parties. Now, however, the tectonic shifts occurring simultaneously in both geopolitics and domestic politics open the possibilities for a powerful, crosscutting new platform for rising political leaders— one of democratizing foreign policy.

The recent J. Wallin Opinion Research survey revealed that 71 percent of Americans believed Congress should pass legislation that restrained military action. The survey shows that 86.4 percent believe the military should be used only as a last resort. Additionally, 63.9 percent of those polled felt that military aid, both money and weapons, should not be provided to regimes like Saudi Arabia—the West’s top ally in the Arab world.

This public sentiment is merely confirming the discontent with interventionism and foreign policy that had been revived by the 2003 Iraq invasion. Bush’s war drew some of the largest protests the world had ever seen. When the administration first began beating the war drums, polls found most Americans opposed invading Iraq. Skepticism was even stronger among those who resided in “coalition of the willing” partner countries like Britain and Australia. Colin Powell supported efforts to dissuade fierce opposition from the U.S. population and from the majority of the world, but those efforts failed. Coalition governments eventually took the undemocratic decision to forcibly spread democracy overseas.

While it was increasingly clear that voters preferred a more restrained foreign policy, politicians continued to conform to the propagated myth of a war-thirsty public. Terrified they might be labeled as “weak” on national security and therefore lose popularity, center-left parties scrupulously avoided policies that were actually popular. “Un-pragmatic ideologues,” “out-of-touch with electoral reality” were the labels used to dismiss internal dissenters whose views actually matched the electorate (see Jeremy Corbyn, Bernie Sanders). Foreign policy was held aloft of all other policy areas, deemed bipartisan, and above the uncouthness of political debate.

This disregard for the democratic will did not exact an immediate, definitive electoral cost on all politicians leading “coalition of the willing” governments. Bush increased his vote share in 2004, as did Australian prime minister John Howard’s Liberal Party. While the British public tried to hold Tony Blair accountable for Iraq, the Labour leadership that succeeded him continued his foreign-policy ideology.

The lack of democratic accountability allowed the pro-interventionist lobby to dictate policy. In America this eventuated in an overblown defense budget that to this day has received nothing near the scrutiny of any other form of public spending. When Bernie Sanders proposed free college tuition, which was estimated to cost roughly $47 billion per year, it was often dismissed as unrealistic. Questions of fiscal responsibility abounded. In contrast, the U.S. Senate recently approved an increase of $80 billion in annual military spending, more than Trump had requested. Eighty-nine senators voted in favor of it and only nine voted against it. This makes the United States’ annual military budget around $700 billion.

Lack of accountability has also enabled decisions that have failed to meet all tests of decent policymaking. They have harmed the economic and security interests of the people; they have betrayed society’s values; they have been unpopular. Thus, it has undermined the traditional wisdom that foreign policy must be left to an elite few qualified to involve themselves in the affairs of state because they alone have access to intelligence information required for accurate decisionmaking.

The Iraq War, for instance, failed to achieve any of the major justifications that had been proffered to the public. First, the claims of weapons of mass destruction were found to be false. The War on Terror justification was undermined by the invasion providing ideological fuel for terrorists, destabilizing the entire Middle East, creating a cascade of conflict that established breeding grounds for a proliferation of terror groups including ISIS, and eventually a flow of terror recruits between the West and Middle East. Finally, the humanitarian justification was completely eroded by the humanitarian catastrophe created by the war. Conservative estimates have around 134,000 Iraqi civilians killed directly as a result of the invasion and innumerable others indirectly, including those continuing to be killed by flow-on conflicts.

From an economic perspective, the war was disastrous. It was estimated to have cost over $2 trillion even by 2013, which does not include the costs of fighting ISIS. Much of those costs have been borne by ordinary Americans—from paying for war debts to being at greater risk of terrorist attacks—while the war profits go to a select group of corporations.

It is difficult to imagine any single decision in any other realm of policy that has cost so much, delivered little, and harmed America and the rest of the world so irreparably. Worse still, catastrophic outcomes along these lines were predicted by both experts and nonexperts.

The only comparably bad decisions seem to emanate from within foreign policy itself. For example, the Vietnam War cost over a million lives and failed to stop the spread of communism. More recently, NATO’s war in Libya was again justified under humanitarianism, namely stopping “imminent mass atrocities” by Muammar el-Qaddafi. A 2016 report by the UK House of Commons Foreign Affairs Committee, however, found that the intervention was based on “erroneous assumptions,” and that “the threat to civilians was overstated,” and the uncritically repeated allegation of mass rape baseless (Cockburn 2011). The promise to the public that the intervention would not entail regime change was immediately betrayed (Rieff 2011). Yet again, the intervention itself directly and indirectly led to violations of human rights. Violations were allegedly committed by NATO-backed rebels, including against minority black Africans, who were reportedly caged, tortured and ethnically cleansed out of their villages (The Telegraph; Sinco 2011; Kwiram 2011). The war seems to have turned a society that, despite being under corrupt and brutal dictatorship, had some of the best social development indicators in Africa, into a failed state. It now boasts a training ground for ISIS, a slave trade, and an open floodgate for refugees into Europe.

The public judgement on the proliferation of wars and interventions that followed 9/11 was made clear in a series of polls conducted by Survey Sampling International, sponsored by the classical liberal Charles Koch Institute and published in the Financial Times. Conducted pre-2016 election, post-election and post-Trump’s inauguration, the polls found that the majority of Americans polled did not believe that U.S. foreign policy over the preceding fifteen years had made them safer. About 51 percent said they felt as if it had made them less safe. A plurality, about 47 percent, also felt was that Washington’s foreign policy had made the world less safe. Only 9 percent believed that it had made the world a safer place.

Opposition to interventionism is increasing. A Pew Research Center poll conducted in 2013 found that 52 percent—more Americans than at any time in the preceding fifty years—believed the United States “should mind its own business internationally.” This confirmed findings in the Wall Street Journal and a 2014 NBC News poll. A 2016 Pew Research Center polling found that 57 percent of those polled believed that the United States should “deal with its own problems and let others deal with theirs as best they can.”

Times They Are a Changin’

In recent years, however, the public’s views seem to be finally entering into the mainstream political debate. Interventionist foreign policy orthodoxy is being increasingly challenged. Politicians are realising that four of the five last U.S. presidential elections were won by the candidate who wanted a less interventionist foreign policy than their opponent, to varying degrees. In 2000, pre-election Bush was less interventionist than Gore. In 2008, one of Obama’s signature traits was that he was less hawkish than Hillary Clinton and John McCain. He continued to be less hawkish than Mitt Romney come 2012. When he sought to intervene in Syria, Congress opposed it, reflecting some degree of fear of public opinion, among other factors.

In 2016, Trump’s isolationist rhetoric helped him to defeat his standard Republican running mates. He wielded the Iraq War as a club and beat Jeb Bush with it. Clinton faced increasing criticism over her support for the Libya war. Today, Bernie Sanders remains the most popular politician in the country and also has a less interventionist foreign policy than most others. The trend is likely to increase with the young being most sceptical of foreign adventures, backing candidates like Bernie or Tulsi Gabbard on the Left and Rand Paul on the Right. In Britain, Jeremy Corbyn’s popularity has continued to rise despite (and perhaps because of) the media’s assaults on him for daring to question interventionist foreign policy, especially after terror attacks. Labour has shrewdly wedged the government over its selling of arms to Saudi Arabia.