On Foreign Policy, Trump Should Tell Paul Ryan to Get Lost 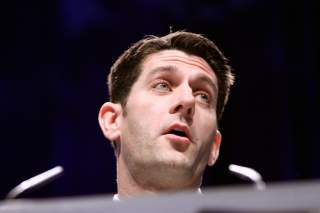 Talleyrand once remarked of the Bourbons, “They have learned nothing and forgotten nothing.” Something similar might be said about the new twenty-three-page House Republican foreign-policy blueprint. It’s called “A Better Way: Our Vision For A Confident America” and is being touted by House Speaker Paul Ryan. Ryan’s apparent objective is to prod Donald Trump to embrace the report.

If so, Trump would be well advised to run away from it as fast as he can. Instead of a far-sighted document that sets out a fresh course for American foreign policy, it offers a mishmash of neocon foreign-policy bilge that has already led the GOP and the United States badly astray.

At the outset, the report inadvertently contradicts itself. The introduction states, “House Republicans believe we need to fundamentally rethink American foreign policy.” In the very next clause, it reads, “relying on the tried and true principles of American leadership and exceptionalism that have long guided us through challenging times.” Which is it? Fundamentally rethinking? Or relying on “tried and true principles”? Sounding as though it were inspired by former secretary of state Madeleine Albright, the report adds, “While America alone cannot guarantee international security, it is the sole, indispensable power that can lead the world in confronting and defusing global threats.” This complacent depiction of American power is, however, not necessarily one that other powers or countries might share. The report does not consider that American intervention abroad can also result in blowback, creating enmities that can haunt the United States for decades. America’s intervention in Iran, for example, in 1953, when it ousted Mossadegh and installed the Shah, might serve as a pertinent example. The report blithely assumes in the case of Iran that America can bend history as it wishes, chastising President Obama for failing to embrace the Green revolution. “Almost immediately after coming office,” it says, “the president faced a choice—stand with Iranians protesting in the streets, or stand aside to preserve secret talks with the regime.” It’s not clear that the choice, as the authors put it, was a binary one. But in any case, would the spectacle of an American president endorsing the revolution simply have emboldened Iranian hard-liners by tainting the protesters as American stooges?

Nor does the report offer a convincing case for how to defeat terrorists—if they can even be permanently defeated. It is longer on exhortation than practical steps. At most, it urges, “To get others to join us, the United States must lead the charge. . . . Today, the fight goes beyond Syria and Iraq. We must develop plans to reverse terrorist gains in places like Libya and to keep nations like Afghanistan from falling back into chaos.” But didn’t the United States try that approach in Libya in 2011, an episode that Obama said was in retrospect his “worst mistake”?

In focusing on terrorism, the report also makes a common error, which is to act as though the battle against Islamic extremism were, at bottom, a war of ideas. It says, “we must promote liberty and human dignity as the antidote to tyranny and terror—and show our enemies that their evil vision will never prevail over our enduring values.” But it’s never been clear that Islamic terrorists are so much opposed to American democracy as to America’s actual presence in the Middle East.

When it comes to Europe, the report simply assumes that Russia is seeking what it calls a “new hegemony.” There can be no doubting that Moscow engaged in revanchism in Ukraine. But is there really an equivalent of the Hossbach memorandum in the Kremlin, outlining a plan for global domination? Or is Russian president Vladimir Putin simply a canny opportunist?

The report, however, demands that “those threatened by expansionist countries like Russia, China, or Iran must be invited to participate in increased joint military exercises and training.” The problem that the authors do not contemplate is that foreign policy is not conducted in a vacuum. Might their approach not create a self-fulfilling prophecy, prompting Russia and China to stake out even more bellicose stances?

Above all, the report makes the easy assumption that the United States is a repository of incarnate virtue surrounded by a sea of enemies. Again and again it refers to “global freedom.” It piously explains, “the United States must continue its long tradition of promoting global freedom.” It fails to consider that other countries may simply view the phrase “global freedom” as itself an ideological weapon—a smoke screen devised to advance American power and influence wherever and whenever it can. By draping power politics in moralistic language, it may unwittingly subvert rather than advance American national interests.

At bottom the report reveals that GOP foreign-policy elites remain in need of their own perestroika. “I think this is a document that we hope the nominee will read, and take attention to,” said Homeland Security Chairman Mike McCaul. Let’s hope not.