Forget ISIS: Al Qaeda Is Back 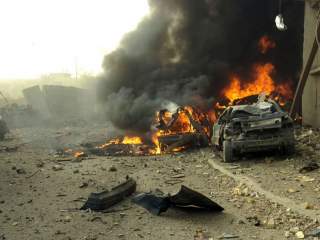 In Islamic State, the world has encountered the most brutal jihad syndicate it’s ever faced. But brutality has its limits.

The mass graves, the crucifixions, the suffocating tyranny have earned ISIS an unprecedented array of enemies—from the United States, to Sunni powers like Jordan, to Shiite militias, to the Kurds—who together have forced it off 40 percent of its territory in Iraq and 20 percent in Syria. Its ruthlessness has emptied cities: Ramadi lost almost 98 percent of its population by the time it was retaken by the Iraqi army, and half a million people have fled Mosul. Having alienated Sunnis and jeopardized its own territory, the safest bet is that the Islamic State will eventually fade into some dark alcove of history, or at least see its power seriously diminished.

But even if ISIS is rolled back, sophisticated Sunni jihadism won’t be. There’s another terrorist organization that’s making inroads in the Middle East. This enemy is an old one: Al Qaeda.

To understand why the group that bombed the Twin Towers is staging a comeback, you have to examine the schism between Al Qaeda and ISIS. Al Qaeda’s operating procedure—and the reason for much of its success—is its focus on the distant enemy: the “crusaders,” that is, the United States and its Western allies. Attacks on fellow Muslims were downplayed. This has solid backing in Islam itself, from Muhammad’s proscription on killing innocents to both sides’ hesitation to spill Muslim blood before the Battle of the Camel.

Islamic State exercised none of this restraint. Though it wants to draw the Western powers into a ground war, its more immediate concern is cleansing Islam of apostates and arresting the rise of Shiite power. In 2006 ISIS, then Al Qaeda’s franchise in Iraq, bombed the Al-Askari shrine in Samarra, one of Shiite Islam’s holiest sites. The goal was to fan an internecine sectarian war that would lead to the extirpation of the Shias. This became even more transparent in 2012, when the group flat-out declared war on Iraq’s entire Shiite population. Such savagery strained its Al Qaeda membership until it was officially expelled by the central office in 2014. Since then, some of ISIS’s bloodiest attacks have been against Shia in Yemen and Iraq.

ISIS eventually eclipsed Al Qaeda, but it also presented its older cousin with an opportunity. ISIS might be able to splatter gore across the news cycle, but Al Qaeda could win the hearts-and-minds battle, which, as those who cringed through the Iraq War understand, is often more important than the military campaign. It was a strategy that originated at the top. In 2005, Al Qaeda leader Ayman al-Zawahiri wrote a letter to the then head of his Iraq affiliate, Abu Musab al-Zarqawi, arguing that “the strongest weapon which the mujahedeen enjoy—after the help and granting of success by God—is popular support from the Muslim masses.”

“In the absence of this popular support,” Zawahiri continued, “the Islamic mujahed movement would be crushed in the shadows.” Zarqawi rejected this logic, but it continues to inform Al Qaeda’s thinking today. As a result, Al Qaeda has ingratiated itself to local populations, and sought to win over Muslims through charity rather than fear.

This is best demonstrated by Jabhat al-Nusra, Al Qaeda’s affiliate in Syria. When the Syrian Civil War tore open a vacuum, Nusra slithered in, both to fight the Alawite regime and to assist beleaguered locals. It opened Qism al-Ighatha, a “Relief Department” through which it provides services from food convoys to health care clinics and playground games for children. The group also likes to boast about the availability of basic services like water and electricity in areas under its control. “For Nusra,” conclude Daveed Gartenstein-Ross and Phillip Smyth, “public opinion is paramount.”

In Yemen, a Saudi-led coalition has been bombing the Iran-linked Houthis for over a year, shattering civil society and leaving half the country on the precipice of starvation. Enter Al Qaeda in the Arabian Peninsula (AQAP), which has exploited the crisis to expand its territory, including into the key port city of Al Mukalla, where the group stole an estimated $100 million from the central bank. But rather than invest its fortune in terror attacks on Shiite mosques, as ISIS has done, AQAP repaired infrastructure, dug wells, and canceled payroll taxes. “I prefer for Al Qaeda to stay here, not for Al Mukalla to be liberated,” one Yemeni told Reuters. Given his nation’s desperate plight, it’s easy to understand why.

Al Qaeda’s enmity for America hasn’t been lost in its community service. Nusra has coordinated with the Khorasan Group of northwestern Syria, which is believed to be plotting an attack on the United States, and AQAP issued two communiqués just last year calling for more jihad against the West. Whatever the outcomes of Syria’s and Yemen’s wars, the aftermaths could see their respective Al Qaeda franchises emerge as Sunni-flavored Hezbollahs, militias with charitable arms that maintain power by smiling inwards and shaking their fists outwards. Despite a recent backlash against Nusra, both groups are far better positioned than they were five years ago.

As we learned in Iraq, jihadist fighters are tough to root out when they enjoy local Sunni support. And by arming the Al Qaeda–allied rebels in Syria and aiding the Al Qaeda–enabling Saudis in Yemen, we’ve only contributed to our own problem. Once again, America looks down and realizes it’s unloaded an entire armory’s worth of ammunition into its own foot. The inevitable result will be a deadlier Al Qaeda—and what then?