Forget ISIS: Shia Militias Are the Real Threat to Kurdistan 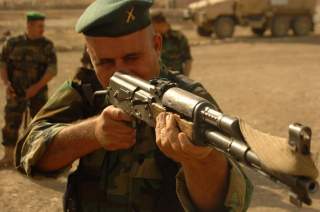 In Iraq, the Islamic State (ISIS) is no longer on the offensive. That is particularly true on the Kurdish front in the north where the ISIS onslaught is now contained.

The Iraqi Kurdish military, the Peshmerga, proved to have the capability to repel the extremist Sunni fighters from ISIS and to hang on to recaptured territory. They have done so largely without many resources or support from West.

With the ISIS threat contained, the Peshmerga are now looking to regroup, but are also increasingly concerned about a new threat on the doorsteps of Iraqi Kurdistan, that of approaching Shia militias that are coming north and are backed by Iran.

Ali Larijani, Iran’s influential speaker of parliament, recently made a visit to the Kurdistan Regional Government (KRG) and both sides applauded the symbiotic state of Iran-KRG relations. While Larijani is the most senior Iranian official to visit the KRG since the establishment of the autonomous region, some leading Iraqi Kurdish officials fear Iran’s empowerment of Iraqi Shia militias is a recipe for a new battle front in Iraq’s north.

The view from the Peshmerga

The Kurds and Iraqi Shia militiamen are already engaging in disputes about jurisdiction and authority. This in the context of the KRG seeking to provide law and order and services to newly recaptured towns. The goal is to encourage displaced families to return to their hometowns.

This mission, however, is proving complicated. Several Shia and other militias, formed by local volunteers, do not always see eye to eye with KRG officials. In fact, these militias are not only challenging the Peshmerga forces but also the armed forces of the central government in Baghdad when it comes to postmilitary recovery operations. Meanwhile, the Ministry of Peshmerga has incorporated some of the local volunteers formed by Yezidis and Christians in Sinjar and at the outskirts of the cities of Mosul and Kirkuk.

Further north inside KRG territory, the Minister of Peshmerga Affairs, Mustafa Sayid Qadir, maintains that his ministry is fully cooperating with Yezidi armed volunteers. In an interview with the authors, Qadir confirmed that the ministry has formed new units for minorities that are already in the ranks of the Peshmerga.

Qadir maintains that the new units made up by minorities “will be officially incorporated within Peshmerga forces.” He denies that these forces will in the future pose a security threat and points to the critical role they played in the liberation of Sinjar from ISIS. “We need more arms and more resources to maintain these new recruits,” he insists.

However, from the KRG perspective, two Shia militia forces—Asaib Ahl Haq and the Badr militias—are uncontrollable.

Both these militias are backed by Iran, and the their military operations are effectively overseen by Qassem Suleimani, the head of the Qods Force, which serves as the external arm of Iran’s elite Islamic Revolution Guards Corps (IRGC).

The Iranian footprint inside Iraq has never been as explicit and strong as it is today. Only last week, Tehran acknowledged that a senior IRGC commander, Brigadier General Hamid Taqavi, had been killed while on advisory mission in Samara. Iranian state media have credited Taqavi as having been one of the founders of Asaib Ahl Haq. He is the most senior Iranian ranking officer to have been killed since the Iran-Iraq War (1980-1988).

The Iranian-backed Shia militias are most active in Diyala, a province that borders both Iran and the KRG. The situation is seen by the Kurds as becoming increasingly untenable, particularly as the Shia militias are moving closer to Kirkuk. This is a strategic but disputed city claimed by both Kurds and Arabs, which has been under Peshmerga control since June when Iraqi government forces fled the city. Kurdish fears about a new front opening up is also rooted in the fact that the Ministry of Peshmerga has no official working arrangement with the Shia militias despite the fact that they have at times worked together against ISIS.

Qadir, the Minister of Peshmerga, refutes any working relationship between his men and the Shia militias. “We do not have any cooperation with them and we are not happy to have them closing in on our [KRG] borders.” Qadir maintains that one of the KRG’s main policy challenges is the fact that the Shia militias are officially answerable to no Iraqi governmental institution in Baghdad.

Qadir traces the roots of the problem to two factors. First, the lack of cooperation between the Peshmerga and government forces has created an opening for the Shia militias. Second, the lack of access to arms and ammunition has hindered Peshmerga in the scope of its operations. “We do not have enough arms to distribute to all of the [Peshmerga] battalions and divisions, and we are still suffering from this weakness,” Qadir says.

Meanwhile, the shortcomings of the Peshmerga forces have created opportunities for the Shia militias. Both Badr and Asaib Ahl Haq are keeping many locals, particularly Sunnis, from returning to their homes after areas have been recaptured from ISIS. According to Kurdish sources, Shia militias have established several checkpoints between the KRG region and Baghdad with a number of Kurdish truck drivers arrested and held for ransom.

The role of Washington

KRG officials are keen for the United States and the anti-ISIS international coalition to take these factors into consideration when the day comes where much larger post-military and stabilization efforts will have to be implemented to reduce the long-term damage that the sudden rise of ISIS brought about.

Meanwhile, the improving ties between Baghdad and the KRG leadership has made it easier politically for Washington to provide direct military aid to the Peshmerga without being accused of undermining the territorial integrity of Iraq. And American support for ongoing plans to reform the Peshmerga is going to remain a critical factor for its success.

The intended reform and restructuring of the Peshmerga is touted as a step that will not only modernize the Kurdish forces but also de-politicize them. Qadir says that the “plan is to build a modern army under KRG's authority rather than political parties,” in reference to Peshmerga forces historically coming from and being answerable to the two big parties in Kurdistan: the Kurdish Democratic Party (KDP) and the Patriotic Union of Kurdistan (PUK).

“We have already started and I have the support of [KRG] President Masoud Barzani to implement reform," Qadir insists. However, “without arms and training,” he says, “the unaccountable militias will continue to exploit the situation and undermine stability once ISIS is defeated.”

Alex Vatanka is a senior fellow at the Middle East Institute in Washington D.C. Sarkawt Shamsulddin is co-founder of Kurdish Policy Foundation, a non-profit organization that focuses on Iraqi Kurdish politics. He is a former employee of the U.S. Embassy in Baghdad and the U.S. Consulate General in Erbil.