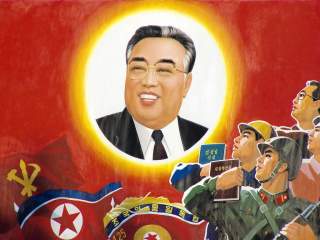 In reminding the world why Iran poses an array of threats to regional security, President Donald Trump preempted the argument of those who believe that a nuclear deal would significantly reduce hostility with North Korea.

To be clear, nuclear weapons are a real and gathering danger, and frequent test launches by the Korean People’s Army suggest steady progress toward deploying long-range nuclear missiles. Yet there is considerable experience and success in deterring nuclear arsenals. The same cannot be said for biochemical and cyber weapons.

Biochemical weapons have been used throughout modern warfare. In World War I, chlorine gas caused soldiers to drown from the fluid that filled seared lungs. In the ongoing Syrian civil war, Bashar al-Assad’s regime has acted with near-impunity in dropping the deadly nerve agent sarin on men, women and children.

Off the battlefield, lethal toxins have been employed by Russian and North Korean agents to eliminate political opponents. In 2006, Alexander Litvinenko slowly succumbed to radiation poisoning after imbibing tea laced with polonium-210. In February, Kim Jong-nam swiftly succumbed after being wiped with the chemicals that comprise VX, a thiophosphonate one hundred times more toxic than sarin.

Pyongyang’s outlandish contention that American and South Korean agents plotted to assassinate North Korea’s “supreme leadership” with biochemical weapons sounds more like a B-rated movie script than the official discourse of a state. It is vaguely reminiscent of the 1952 hoax perpetuated by China that U.S. soldiers were using biological weapons during the Korean War.

Yet North Korea’s latest, persistent allegations of an South Korea-U.S. conspiracy to “eclipse the eternal sun” of the Democratic People's Republic of Korea raise intriguing questions about North Korea’s true motivations and intentions.

North Korea has put up a united front of propaganda to give its wild story a patina of plausibility. Vice Foreign Minister Han Song-ryol convened foreign diplomats to describe the supposed scheme to assassinate Kim. Stitching together different official accounts, a Pyongyang resident helpfully identified as “Kim,” working in the timber industry in Khabarovsk, sought to knock off the number-one Kim during an April military parade. According to North Korea’s ambassador to China, the National Intelligence Service and the Central Intelligence Agency “secretly and meticulously” conspired to kill Kim Jong-un with “radioactive or nano-poisonous substances.” A “declaration of war” is how North Korea’s United Nations Mission summed up the alleged conspiracy.

Assuming NIS and CIA officials have not gone rogue, how can one explain Pyongyang’s conspiratorial barrage? One way to evaluate these choreographed—if crazy—stories is through the prism of a centrally controlled regime determined to tightly regulate the flow of information.

Knowledge is power. Democrats try to share it. Dictators try to control it. But how well is Kim Jong-un exercising mastery over information in North Korea? Just because his senior officials and diplomats read prepared talking points, does not necessarily imply that they believe their own narrative. Indeed, the biochemical plot to assassinate Kim might be a clumsy attempt by the regime to rationalize sending a hit squad to Malaysia to kill the eldest son of Kim Jong-il.

Proof of Pyongyang’s fixation on oppressing even the flow of information can be seen in its crackdown on the import or smuggling in of any outside electronic devices. Even more compelling is North Korea expanding cybercrime and cyberwar capabilities.

No one can be sure yet who was responsible for the recent wave of ransomware attacks, but certainly North Korea has both the means and the motive for undertaking such action. Some suspect that North Korean sleeper cells of digital soldiers may have carried out the worldwide assault to strike back at outside powers, including China, while also seeking to finance expensive weapons programs. Authentication will take time, but there seems to be a connection between the so-called Lazarus hacking group and the remarkably successful 2016 cyber heist of the central bank in Bangladesh and the 2014 assault on Sony Corporation. North Korea’s special Unit 180 may be linked to these information warfare activities.

Pyongyang likes to rattle the nuclear saber but remains ready to use biochemical and cyber weapons. Nuclear weapons are useful insurance policies against intervention, but their use would be suicidal. The more surreptitious use of biochemical and cyber weapons, however, risks creating a grave new world by seeking to strike below the threshold of nuclear deterrence and catalyzing war.

The hopeful news is that leading officials in Seoul and Washington understand the stakes and the need to work together to preserve deterrence in the face of emerging threats. Secretary of Defense James Mattis recently stated that using force to settle the North Korea problem by would be “tragic on an unbelievable scale.” And President Moon Jae-in’s new national security advisor, Chung Eui-yong, has emphasized that “there is ample room for the U.S. and South Korea to calibrate and plan their joint engagement with the North.”

The bad news is that the bizarre publicity campaign about a fantastical conspiracy to assassinate Kim, coupled with suspicions about Pyongyang’s growing cyber hijinks, suggest a regime bent on acquiring multiple weapons of mass disruption and destruction. Even if leaders can make headway on reining in the looming nuclear dossier, the dual threats of biochemical and cyber weapons will remain a gathering peril.

Dr. Patrick M. Cronin directs the Asia-Pacific Security Program at the Center for a New American Security (CNAS) in Washington, DC; his Twitter handle is @PMCroninCNAS.