Forget the Reindeer, Santa Has an Air Force 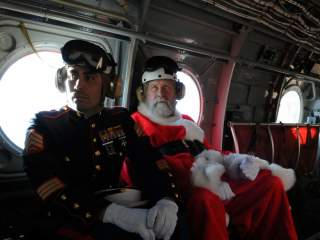 For decades, the media has perpetuated the myth that Santa made Christmas happen from a single sleigh pulled by eight (or possibly nine) magical reindeer. Santa Claus himself purportedly traveled the world in this sleigh, delivering immense loads of toys across the world in what amounted to a snap of the fingers.

Times change, and we are now able to uncover the truth. In fact, Santa’s Workshop has long been at the forefront of aviation technology. Santa pioneered the use of dirigibles to deliver toys and goodies well before the First World War. Later, he shifted to the most modern heavier-than-air craft. Santa entered the jet age in the 1950s, delivering toys with an array of the world’s most advanced heavy bombers.

Santa’s Workshop now fields one of the world’s largest air forces. Here are the mainstays of the North Pole Air Force (NPAF):

Sometimes Santa needs size, and sometimes he needs flexibility. For decades, Santa’s Workshop depended on a variety of helicopters to help reach isolated towns and villages. That ended with the acquisition of the V-22 Osprey. The speed, cargo capacity and vertical takeoff and landing capabilities of the Osprey set it apart from even the best helicopters. The Osprey can carry nearly 20,000 pounds of toys up to a thousand miles, land vertically, then return to base. It’s no exaggeration to say that the Osprey has revolutionized how Santa delivers toys to rural communities.

Sometimes you just need a plane that can carry a lot of stuff. Of all the world’s great cargo aircraft, the An-225 (NATO designation: Cossack) is the biggest, capable of carrying 200-plus tons over 2,500 miles. Developed from the An-124 Condor, the Soviets built only one Cossack, which now flies as part of Ukraine’s Antonov Airlines. Originally designed to carry the Soviet space shuttle, the original Cossack sat in reserve for eight years after the collapse of the Soviet Union before returning to service in a commercial capacity. During that time, Santa quietly contracted for the completion of a second aircraft, left half-finished at the end of the Cold War. One of the world’s largest aircraft, the Cossack is uniquely capable of carrying the huge payloads needed by Santa.

The F-35B has issues, but it’s the only aircraft in the world to combine supersonic speed and a stealth configuration with vertical takeoff and landing capability. Especially in stealth configuration, the carrying capacity of the F-35B is low (two 1,000-pound bombs, plus anti-air weapons that amount to a total of roughly 2,800 pounds), but suffices to distribute goodies to the world’s most anti-access neighborhoods. However, critics have pointed out that the need to include gift-delivering software has helped drive the per-unit cost through the roof; not even Santa can afford many of these toys.

Refueling makes everything else possible, and planes don’t fly on holiday cheer. As a non-state actor, Santa’s Workshop can’t depend on easy access to airfields. The KC-10 Extender, developed from the DC-10 in the early 1980s, provides the NPAF through absolutely critical in-flight replenishment. With twice the capacity of the KC-135, Santa’s KC-10s can keep the rest of the NPAF in the air across long stretches of ocean, or of empty landscape. In a pinch, the KC-10s can also carry a fair cargo of toys itself, as well as a small army of elves and reindeer.

Like any large organization, Santa’s Workshop depends, above all, on the management of information. Santa needs to know which packages go where, he needs a full grasp of the tricky early winter weather conditions and he needs to know where NORAD is deploying its interceptors. Indeed, Santa is probably the most information-hungry consumer on the planet.

No aircraft in the world manages information better than the E-3 Sentry. From the late 1970s on, the Sentry has managed air space for the United States, keeping track of friendly and enemy contacts and filling commanders in on the complete picture. In proper Yule configuration, the E-3 plays a critical enabling role by ensuring that gifts arrive where they need to be, when they need to be there.

What kinds of aircraft might Santa want in the future? Santa’s Workshop will almost certainly become a customer for the KC-46, as soon as it becomes available, and there’s little question that Santa will have an interest in the multifaceted LRS-B, especially if Northrop can keep costs under control.

The big question is whether Santa will go unmanned. Elf and reindeer pilots aren’t cheap, and no one wants to have to crack Blitzen out of North Korean prison (again). Rumor has it that Santa has expressed considerable interest in Amazon’s same-day-delivery-drone model. Still, it would be sad to see the pilots of the NPAF exchange their flight gear for computer screens.