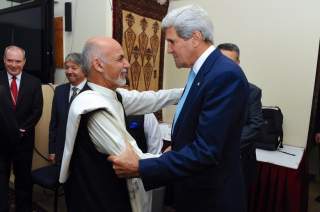 Since the attacks of September 11, the United States has engaged in and with Afghanistan in pursuit of common strategic interests. Our cooperation with the Afghan government and Afghan people remains a key front in a generational conflict against violent extremists across the greater Middle East.  Although the extensive turmoil there leads some to believe that the United States is incapable of playing a constructive role in stabilizing and transforming the region’s politics and security situation, we cannot escape this conflict. To succeed, we need, above all, allies in the region with whom we can partner militarily and politically. Our strategies and policies going forward should include ensuring the success of this American-Afghan partnership.

The Obama years have encompassed an intense, challenging period in Afghanistan policy. The U.S. role in the war in that country, dating back to 2001, has cost more than 2,300 American lives and $800 billion in American resources, most over the last eight years. We mourn the dead and wounded and grieve for their families, and profoundly cherish their service to the nation. The mission has demanded enormous military, diplomatic and economic attention and investment.  The numerous complexities were made more challenging by difficult relations with former Afghan leader President Hamid Karzai during his latter years in office, from an unsettled Afghan political environment more generally, from the legacy of disintegration of an Afghan state that had historically never been strong, and from the dual role of Pakistan—part friend, part strategic challenge in the conflict.

President Obama has attempted to use the prospect of possible American/NATO withdrawal from the country to induce Afghan reforms and an Afghan sense of self-reliance. But ultimately, while progress has been achieved, he concluded that he cannot end the U.S. role in Afghanistan and that he would have to hand off an ongoing mission to his successor. Fortunately, that U.S. role today is much more modest than before—less than 10 percent of earlier American troop levels, less than 20 percent of earlier financial costs, and less than 5 percent of earlier U.S. casualty rates, as of this writing late in the early fall of 2016.

The next American president will have an opportunity to settle Afghan policy onto a more durable, more effective, and less demanding course. In our view, the watchword for this new approach should be one of an enduring partnership, based on mutual commitment. We should plan for a long-term American—and coalition—role in the country that avoids the recent pattern of nearly annual reassessments of whether the United States should stay, militarily and as a major donor.  We should also avoid publicly-announced withdrawal timelines. Instead, we should take a quieter and more patient approach, consistent with the commitments the international community made at Bonn in 2011 to help make the entire 2015-2024 period the “decade of transformation” in Afghanistan.  The U.S.-Afghan partnership should be recognized as generational in duration, given the nature of the threat and the likely longevity of its future manifestations. Less attention should be placed on troop numbers, and troop caps, as the barometer of whether an exit strategy is being successfully implemented. Rather, the emphasis should be on securing Afghanistan as a crucial pillar of America’s global anti-terror campaign and as a needed contributor to stability in the region.

The U.S. and broader international commitment should not, however, be unconditional.  Indeed, the notion of conditional engagement was agreed between donors and the Afghan government in the Tokyo Mutual Accountability Framework of 2012 and remains valid today. If the enormous investment that the world has made in Afghanistan since 2001 is to be worthy of continuation, Afghans must do their part to improve governance and economic well-being, and thereby build public support for the government. The very enormity of that U.S. investment to date, and the value of Afghanistan in the broader struggle against jihadi extremism, argue strongly for trying to sustain—and build on—the progress we have collectively achieved so far. And while there is no easy answer about how to improve U.S. relations with Pakistan, we expect that clear articulation of an enduring American commitment to Afghanistan and the region can only help in gradually reducing the distrust and rivalry that often predominate in the relationships in Central and South Asia today.

A new U.S. president could reasonably question the importance of Afghanistan to American security. Past expenditures sacrifices do not automatically mean that the country is strategically vital to American interests today. Indeed, the first President Bush concluded back in 1989 that Afghanistan was not worth continued U.S. investment. After covert programs in the 1980s to aid the Afghan mujahedeen, conducted with the cooperation of Pakistan and several other countries, achieved their goal of defeating invading Soviet forces, the United States effectively withdrew from the region.

But ignoring Afghanistan proved unwise. Beyond the stain on America’s honor of deserting wartime allies who had done much through their own sacrifice to defeat Communism and help win the Cold War, the turmoil that ensued in Afghanistan after 1989 ultimately gave rise to the Taliban—and then to the sanctuary for al Qaeda that the Taliban provided Osama bin Laden. The 9/11 attacks were planned in that sanctuary, and the initial training of the attackers was conducted there. The U.S. disengagement also helped create cynicism among many Pakistani security officials about American motives and American dependability. Pakistan was left largely on its own to cope with the aftermath of the successful mujahedeen effort against Soviet forces, absorbing millions of refugees and other burdens. Also, our departure encouraged some Pakistani leaders to believe that we would ultimately give them a free hand in Afghanistan to pursue their own interests.

The consequences have been enormous and enduring. Pakistanis have referenced this past American behavior to call into question U.S. commitment to the region going forward. They have often then used this concern, however unreasonably, to justify Pakistan’s own policies of tolerating and in some cases supporting Afghan Taliban and Haqqani Network safe havens on its territory.  These safe havens have, perhaps more than any other factor, precluded successful conclusion of the counterinsurgency campaign within Afghanistan. Absent change in Pakistan’s behavior, they are likely to continue doing so.

Even today, Afghanistan is central to what has been called the war on terror or war against Islamic extremism. It is clearly important in its own right. It also provides a location, and an ally, for watching and if necessary attacking extremists across the region.

Afghan leaders who would take America’s commitment as a given under any and all circumstances should not do so. Afghanistan may not be vital to American security in the strictest sense of the word.  But it is very important, as Americans collectively learned when we essentially ignored what happened there from 1989 through 2001.

Of all the countries in which we are militarily engaged, Afghanistan is one of the few where our armed forces are overwhelmingly welcome. Its leaders understand the danger they face and want to partner with us in confronting it—even if they do not always adequately partner with each other.  Its security forces, while still developing, are gradually becoming capable and resolute, especially in those sectors where they have strong field commanders who have achieved their positions through competence rather than patronage. To be sure, nations such as Iraq, Syria, Saudi Arabia, Egypt, and Pakistan are also central in this great counterterrorism challenge of our times. And Pakistan is particularly significant in that regard, with some 200 million people, more than 100 nuclear weapons, and a number of al Qaeda senior leaders and extremist groups on its territory.  But the U.S. role in Afghanistan helps create an eastern bulwark, as well as an eastern base of operations, in this wider generation-long campaign. Such an asset is crucial for the ongoing struggle that the next U.S. president will face regardless of whether he or she wishes it. To be sure, the American military posture in Afghanistan and the broader allocation of U.S. assistance resources need to be efficient and sustainable. Yet, they also should be adequate to the significant task that is still at hand.

Even if we know the stakes in Afghanistan, how do we define our goals? The ideal endgame for the next American president would be a successful resolution of the conflict, with Afghans securing and governing their country so that it will not again become a place where extremists can find sanctuary, and so that it can be a long-term strategic partner of the United States and its allies.

But this goal, which implies an acceptable political settlement with the insurgent elements in Afghanistan, may be too ambitious for some time to come. If overemphasized as a practical policy objective, rather than a long-term vision, it could create unrealistic expectations among the American people, renew doubts about our staying power among Afghans and Pakistanis, and give too much leverage over our policy to the Taliban.

While we strongly support the objective of a peaceful Afghanistan, we recommend a realistic attitude toward negotiations with violent armed actors. A fair amount of the Afghan resistance has historically been made up of “accidental guerrillas” who fight more for reasons of tribe or local grievance than for ideology or national-level goals. Ideally, over time, some fraction of these fighters could be persuaded in one way or another to lay down their arms and reintegrate into society and the body politic. Nonetheless, the Taliban (including the so-called Haqqani Network) remains a crucial part of the insurgency—and a durable one. And its central leadership, based in Quetta and Peshawar, as well as in Pakistan’s tribal areas and perhaps in cities like Karachi too, shows few signs of moderating its longstanding and extremist war aims. These include reestablishment of a theocratic government without a commitment to human rights (including those of women and minorities), and without accountability to Afghan citizens through processes such as elections. The Taliban also maintains strong ties to numerous terrorist groups. To hinge U.S. policy on the expectation of a compromise with such a group would be unwise.  We should aspire to work towards such a goal but not be overly optimistic about achieving it on any specific timeline.