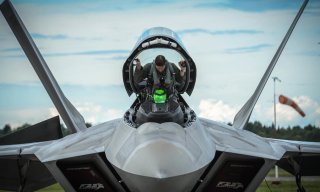 The might of the U.S. industrial base over the last eighty years has served the country well. The “Arsenal of Democracy” led the Allies to victory in World War II, led to the conclusion of the Cold War, and has enabled the United States to promote peace and security since. But the global order is changing, and competitors have emerged. What made the United States so effective since Pearl Harbor cannot guarantee such continuing success in the future.

Much has been written about the challenges the nation’s defense industrial base is facing—from poorly executed bureaucratic approaches to a lack of trust between business and government; from a declining number of companies involved in the national security space to a hollowing out of those still engaged; from expensive weapon systems that are taking longer to field to difficulties leveraging technologies found in the commercial marketplace; and finally, from trade controls that can inhibit technology sharing among allies to loopholes that allow the theft of critical technologies by our competitors.

In recent years, an array of largely uncoordinated committees, commissions, and studies have tried to address these shortcomings and have made important contributions. However, without the articulation of a unifying end-state vision that is also accompanied by a rethinking of the core architectural paradigm for the entire system, it is almost inevitable that the impact of these varied efforts will continue to fall short. Such an end-state vision does not presently exist; the current system needs to be reconceived based on the paradigm of a “network.”

Networks have become a key organizing principle behind many of the recent business successes in the civilian sector. Amazon, Uber, Google Waze, Meta, and Airbnb are all examples of start-ups that took advantage of the information revolution and achieved explosive growth through successful scaling of network strategies along with effective use of the power of machines, platforms, and crowds. The same must now be achieved for the defense sector. The United States must move from “industrial-base thinking” to “network thinking.” Regardless of whether Metcalfe’s Law, which predicts that a network’s value is proportional to the square of the number of its nodes, is directionally correct or overstated, the power of a well-functioning network is undisputed.

Harnessing our collective capabilities, talents, and innovations into such a dynamic and aligned network will help overcome the limitations of linear thinking that have impaired the nation’s competitive position in an increasingly challenging world. It will support the improved revitalization of conventional defense-industrial capacity, while also more fully integrating the creative, productive, and dual-use capabilities of the broader economies of the United States and its allies. Attracting and scaling a larger number of more diverse elements into a networked system will enable the United States and its allies to accelerate growth, dramatically increase pivot speed, and substantially enhance resiliency. Finally, by building a flexible network more powerful than the sum of its individual parts, the United States and its allies can create a system capable of outperforming more authoritarian, centrally-planned competitors such as China.

For such a defense network to achieve full potential, however, it must have several fundamental features, incorporating at least five characteristics.

First, it must shed the unconscious assumption of U.S. dominance over strategic competitors and move to a mindset that focuses more on nimble, opportunistic competitiveness with near peers, including the capacity to be a fast follower. Another element must be a rethinking of how tradeoffs are balanced between risk and opportunity capture. Likewise, the United States cannot succeed without close collaboration with its allies. In today’s world, the United States must systematically draw out the best ideas and solutions from all friendly partners regardless of origin.

Second, a reconfigured industrial system must incentivize businesses to scale at the speed of relevance and support swift delivery of new technologies for defense development use. This can sometimes mean moving away from larger, more vertically integrated providers as the preferred vehicle for producing and fielding capabilities. It will also require bringing to bear a more balanced network of small, medium, and large businesses. To loosen defense vendor lock dynamics, focus will have to be placed on how to effect modernization-in-place more quickly through such approaches as modularity, state-of-the-art software design, and interchangeability.

Third, the future industrial network must fully leverage the U.S. competitive advantage in the financial marketplace—at all levels from venture capital to Wall Street financing—to help fund and energize more research and development. Doing so will help the Department of Defense (DoD) to rebalance its spending from costly research and development back into procurement, thereby increasing government buying power and opening the door to greater private capital investment and involvement in technologies with dual-use potential.

Fourth, the network must find and deploy technologies from all sectors of the industrial base, taking full advantage of those initially intended for commercial purposes. It must obtain visibility of the array of technologies in development across the entire economy. It must also be capable of agilely adapting such emerging technologies to defense use without costly and time-consuming reinvention and reduplication.

Fifth, the future industrial network will only be as powerful as the talent it attracts, develops, and employs. For the United States to remain preeminent, the workforce of today and tomorrow must have a culture promoting innovation, professional development, and satisfaction. To achieve this, even more cooperation between government, business, and educational institutions will have to be fostered.

The United States has successfully built such a national security-related network before; the challenge is designing and scaling a network to address a much broader set of constituencies, complexities, and interests. From 2009 to 2016, the two of us worked together in respective roles to equip and deploy fighting forces at U.S. Special Operations Command (USSOCOM). We saw the power that a network approach can offer to solve complex and urgent challenges. Based on a shared vision, opportunistic posture, and competitive mindset, a diverse group of existing DoD vendors, startups, allies, academic partners, and government joined together as a network to deliver rapid, outsized outcomes for our troops downrange.

Thanks to this approach, the USSOCOM maximized its $10-12 billion annual budget, fielding complex weapon systems in months versus years, with constant adaptation to new needs on the battlefield. For example, the command was able to develop a new AC-130 gunship in one-fifth the time and at one-fifth the cost of the legacy system it replaced. New precision weapons were fielded in six months versus traditional five-year development timelines. Unmanned aerial systems were progressed from unproven prototypes to a sophisticated network of lethal aerial capabilities in years not decades. Real-time exploitation of full-motion video and other surveillance data became a reality on the battlefield based on the rapid integration of commercially developed communications, processing, and analysis tools. It was not a change in any particular policy or process that achieved these results. Instead, it was the development and implementation of a specialized USSOCOM network—a team of teams—all focused on the command’s most challenging needs and with a common view of what success looked like and an alignment upon the incentives necessary to reach those goals.

As a first step to creating a comparable network for the entire defense base, the numerous boards, commissions, and study teams that are presently working on specific issues must coalesce as their own network to develop a higher-level vision, defining the core features that this new defense industrial network system must have. This should not take years to achieve or go through debilitating bureaucratic layered review—just the opposite. When faced with similar strategic threats in the past, the United States has shown itself more than capable of swiftly convening a critical mass of the individuals and institutions that are required to deliver a shared vision and achieve alignment. From the Manhattan Project, to putting a man on the moon, to Operation Warp Speed, the United States has succeeded against extraordinary challenges.

Based on such a common end-state vision, the nation’s capable constellation of independent contributors can then begin the process of performing tasks as connected elements in a larger network. Ongoing reinforcement, iteration, and optimization will, of course, be needed to improve the effectiveness of the network. However, the critical foundations will have been laid, enabling U.S. energies to move beyond the stovepiped approaches that have slowed progress and impaired outcomes over the past two decades. Together, as a team of teams, the United States has the capacity to make a more potent networked future a reality; the time to start on this critical initiative is now.

The Honorable James F. (Hondo) Geurts is a BENS Distinguished Fellow. He is the former Service Acquisition Executive for the U.S. Navy, U.S. Marine Corps, and U.S. Special Operations Command, and subsequently performed the duties of the Under Secretary of the Navy.