Former Israeli Nuclear Head: No Iran Bomb for Ten Years—If They Even Want It 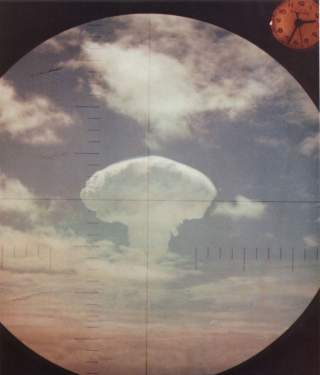 The former head of the Israel Atomic Energy Commission Brigadier General (res.) Uzi Eilam just dropped a bombshell (no pun intended): "The Iranian nuclear program will only be operational in another 10 years," he told the Israeli paper Yediot Ahronoth. "Even so, I am not sure that Iran wants the bomb." And he added that Prime Minister Benjamin Netanyahu is employing needless fearmongering about Iran's atomic aspirations in order to further his own political aims.

Mindful of the ongoing—and thus far successful—nuclear talks with Iran, and Netanyahu’s vocal opposition to them, Eilam’s statement must be music to the ears of the Obama administration. It further embarrasses those in Washington who so uncritically swallowed Netanyahu’s talking points hook, line and sinker—and repeated the Israeli prime minister’s arguments as their own.

But when such an Israeli authority as Eilam publicly tears apart the official Israeli narrative about Iran’s nuclear intentions, one must ask oneself why such a unfounded narrative—in the words of Netanyahu himself, “It’s 1938 and Iran is Germany. And Iran is racing to arm itself with atomic bombs”—ever gained foot in the first place.

Particularly when ample evidence has existed in the public realm that the Israeli-Iranian enmity is exacerbated, but not caused or driven by Iran’s nuclear program.

As I write in Treacherous Alliance—the Secret Dealings of Israel, Iran and the United States, not only does Netanyahu’s characterization of Iran have little relationship to reality; Netanyahu himself knows this better than most. Outside of the realm of cynical posturing by politicians, most Israeli strategists recognize that Iran represents a strategic challenge to the favorable balance of power enjoyed by Israel and the U.S. in the Middle East over the past fifteen years, but it is no existential threat to Israel, the U.S. or the Arab regimes.

And that was the view embraced by the Likud leader himself during his last term as prime minister of Israel. In the course of dozens of interviews with key players in the Israeli strategic establishment, a fascinating picture emerged of Netanyahu strongly pushing back against the orthodoxy of his Labor Party predecessors, Yitzhak Rabin and Shimon Peres, which treated Iran as one of Israel’s primary enemies. Not only that, he initiated an extensive discreet program of reaching out to the Islamic Republic.

When he took office in June of 1996, the U.S.-educated Likud leader sought not only to undo the peace process with the PLO and the land-for-peace formula; he also sought a return to Israel’s longstanding strategic doctrine of the periphery—the idea that the Jewish State’s security was best achieved by forming secret or not-so-secret alliances with the non-Arab states in the periphery of the Middle East—primarily Turkey and Iran—in order to balance the Arabs in Israel’s vicinity.

Such a shift required efforts to undo Shimon Peres and Yitzhak Rabin’s rhetoric on Iran—deemed “exaggerated and self-defeating” by many in Israel at the time—as well as attempts to quietly reach out to Tehran. Unlike his Labor predecessors, Netanyahu chose to follow the recommendations of an internal Israeli government report on how to address the Iranian challenge, which had concluded that Labor’s inflammatory rhetoric had only attracted Iran’s attention and strengthened Iran’s perception of an Israeli threat, which in turn had made Israel less rather than more secure.

One of Netanyahu’s first orders of business was to request an intelligence assessment of Israel’s security environment from both the Mossad and the military intelligence.

The assessments were presented at a full cabinet meeting. Major General Amos Gilad represented the military and Uzi Arad, the Director of Intelligence of the Mossad, argued on behalf of the intelligence services. While the debate was heated and passionate—as all cabinet discussions were in the Netanyahu government—the outcome was unprecedented.

Gilad argued that Iran had replaced Iraq as an existential threat to Israel. “I presented a tough line that claimed that Iran would be dominated by the conservatives.… This was at the level of strategic intentions,” the Major General explained to me. “Even one primitive device is enough to destroy Israel... Altogether, it seemed that ideologically and strategically, Iran [was] determined to destroy Israel,” he concluded.

Arad presented a radically different perspective. He argued that Iran’s rearmament was defensive and primarily aimed at deterring Saddam Hussein. Iran needed to rearm due to the natural continuation of its enmity with the Arab states; after all, Iran and Iraq had yet to sign a conclusive peace treaty.

The heart of Arad’s argument was that Israel had a choice: it could either make itself Iran’s prime enemy by continuing Peres and Rabin’s belligerent rhetoric, or it could ease off the pressure and allow the Iranians to feel a greater threat from other regional actors.

“There are enough bad guys around them; we don’t have to single out ourselves as the enemy,” went Arad’s argument. Israel should remain cautious and pursue a policy of wait and see whether Iran’s ambitions went beyond its legitimate defense needs.

Most importantly, Israel should avoid continuing the pattern of rhetorical escalation with Iran that had characterized the stance of the previous two Labor governments. “We needed to tone down,” said Shlomo Brom, who was a member of the original Iran committee.

Netanyahu listened carefully as the two sides fought it out. Gilad spoke with great confidence, knowing very well that no Prime Minister had ever dismissed the findings of the military’s National Intelligence Assessment. And with the Israeli tendency to embrace doomsday scenarios and treat nuanced and slightly optimistic assessments with great suspicion, the odds were on his side.

But Netanyahu’s response left Gilad baffled. In an unprecedented move, the Prime Minister rejected the National Intelligence Assessment and instead adopted Arad’s recommendation of reducing tensions with Iran. Much to Gilad’s frustration, Netanyahu focused on Arafat and the Palestinian threat instead of Iran and put a complete end to Israel’s confrontational rhetoric against Tehran. It was a major policy shift that affected all levels of Israel’s planning vis-à-vis Iran

Netanyahu even tried to reach an understanding with Iran though the help of prominent Iranian Jews, he stopped Israeli attacks on Iran within international organizations, he arranged for meetings between Iranian and Israeli representatives at European think tanks, and he encouraged Israeli parliamentarians to reach out to their Iranian counterparts at meetings of the Inter-Parliamentarian Union.

None of his efforts bore any fruit, though. Iran’s dismissal of Israel’s conciliatory signals convinced the Netanyahu government that just like in the Iran Contra affair, Tehran only wanted to mend fences with the U.S. and had no real interest in rebuilding its ties with Israel.

Therein, of course, lay the real threat from Iran.

The Israelis saw danger in a rapprochement between Tehran and Washington, believing this would inevitably see the U.S. sacrifice some of its support for Israel in order to find a larger accommodation with Iran in pursuit of U.S. strategic interests in the Persian Gulf and the Caspian Sea. Iran would become emboldened and Washington would no longer seek to contain its growth. The balance of power would shift from Israel towards Iran and the Jewish State would no longer be able rely on Washington to control Tehran. “The Great Satan will make up with Iran and forget about Israel,” Gerald Steinberg of Bar Ilan University in Israel noted.

Today, the fear of abandonment is palpable. And it has become aggravated by Netanyahu’s mishandling of the relationship with President Barack Obama.

Many in the Israeli establishment are genuinely worried that Netanyahu’s unreasonable position will further isolate Israel and compel the US to ignore Israeli demands because “nothing will please Netanyahu anyways.” The face saving exit for Israel is to do precisely what Eilam has signaled: There is a different narrative in Israel about Iran and Tel Aviv can adjust to a US-Iran thaw—Netanyahu and his neoconservative allies’ rhetoric notwithstanding.

Trita Parsi is the author of A Single Roll of the Dice - Obama's Diplomacy with Iran (Yale University Press, 2012). He tweets at @tparsi. This article is a revised version of a blog post from 2007.