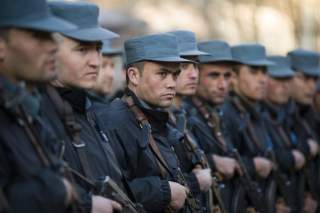 Afghanistan is once again embattled in another bloody fighting season. Major population centers, to include Kunduz city and Lashkar Gah, are under threat of falling to the Taliban. U.S. and NATO forces continue to brief that Afghanistan still holds the major population centers and that the Taliban are unable to hold terrain. However, reports emanating from the battlefield indicate that Afghan forces are merely occupying a handful of administrative buildings throughout Helmand, effectively creating a fortress Lashkar Gah as the last bastion of government force in the province.

The same could be said of Kunduz city, where Taliban forces have effectively surrounded the populous city and captured most of its surrounding villages.

As each year passes by, Afghan forces continue to lose ground to the Taliban, though as indicated by Brigadier General Charles H. Cleveland, the Pentagon spokesman for Operation Resolute Support, the Taliban have been ineffective this fighting season—as he described the combat in Helmand, “15 to 20 Taliban would assault a checkpoint or a district center, a smaller group of Afghan forces at the location would withdraw, the Taliban would loot the place, then the Afghan forces would come back and move them out.

This description of the combat situation in Helmand does not seem to effectively explain how the Taliban now control the majority of Helmand Valley and Kunduz province. As Afghanistan continues to lose ground around the country, U.S. and NATO forces continue to apply a Western notion of military success by detailing to the public that all is well because the Afghan government still controls the major city centers of Lashkar Gah, Kunduz, Jalalabad, Kandahar, Herat, and Mazar-e-Sharif, while the countryside and rural Afghans are besieged and controlled by the Taliban.

This same mistake was made after the United States overthrew the Taliban in 2001, effectively declaring the Taliban destroyed—the United States captured major population centers, hoisted the flag and declared victory. In 2005, George W. Bush diverted much of the U.S. effort in Afghanistan to Iraq, highlighting the administration’s belief that the war was over. What was not anticipated by U.S. and coalition forces was the speed and ability of the Taliban forces to reignite the insurgency by breeding resentment and fostering disillusionment in rural sectors of Afghan society; as Marine General James Mattis would say, “the enemy gets a vote.”

This has been the case in Afghanistan for centuries; Afghanistan’s mountainous terrain and decentralized economic and political system has always afforded the rural elements in society an upper hand in counterrevolutionary actions. The ability to mobilize the rural sectors against the People’s Democratic Party of Afghanistan in the 1980s invited the Soviet intervention to stave off collapse—though it would eventually dissolve in 1992, heralding the warlord era and rise of the Taliban.

This New York Times map points out the problem. Much of what is dominated by the Taliban is in fact rural countryside, but rural areas are the real center of gravity in Afghanistan.

Another question we should ask ourselves is whether or not Kabul really even controls these population centers. Has Afghanistan already descended into another warlord period?

General Abdul Rashid Dostum, Ashraf Ghani’s current Vice President and a former warlord under the Northern Alliance, hails from Jawzjan district and has been embroiled in a struggle with another powerful Afghan warlord, Atta Mohammad Noor, governor of Balkh province.

Both men fought against each other for control of northern Afghanistan during the civil war that preceded the Soviet withdrawal and once again after the 2001 U.S.-led invasion. Noor is an ethnic Tajik and former mujahedin commander in the Jamiat-e Islami political party; Dostum is an ethnic Uzbek and chairman of the National Islamic Movement of Afghanistan party or Junbish—a Communist-aligned institution. The political divisions that separate the two are steep, though due to increased insecurity, they have been forced to work with each other to quell the insurgency in Afghanistan.

At the start of his administration, Ashraf Ghani set out on a campaign to reign in warlords like Noor in an attempt to centralize power within Kabul. However, due to a resurgent Taliban, Ghani has been forced to work with warlords and various militias throughout the country. Having ruled Balkh for twelve years, Noor has entrenched himself as an invaluable player in Kabul’s war against the Taliban. Ghani has been forced to empower both Dostum and Noor.

In an order to maintain an even footing and influence in northern Afghanistan, Dostum has utilized Afghan security forces as his own private militia by launching operations in his hometown district of Jawzjan. These operations have had little to no impact on the battlefield, and serve only the self-interest of Dostum in his attempt to remind Noor of his presence in the region and his strength.

Dostum and Noor have both been implicated by Human Rights Watch for various war crimes across northern Afghanistan. Dostum’s recently activated Junbish militia was implicated in a June assault on a village in Faryab province that killed five ethnic Pashtun villagers and wounded 20.

The temporary alliance between the strongmen is a dangerous gamble by Ghani: should it fail, it could tip all of northern Afghanistan into a civil war.

Enter Kandahar strongman and warlord Lt. Gen. Abdul Raziq. Raziq rose to prominence in Kandahar, becoming a powerful and staunch American ally in the region. Once one of the most violent regions in Afghanistan and considered the birthplace of the Taliban, Raziq’s brutal tactics and impressive network of informants pacified and stabilized much of the city and province. As a result, both Karzai and Ghani administrations have been unable to reel him in, as Raziq is the only person that stands in the way of a collapse of the province. His importance to Kabul’s strategy in southern Afghanistan is vital, and as such, despite numerous human-rights complaints, Raziq still receives support and funding from the United States and Kabul.

Abdul Zahir Qadir and Gul Agha Sherzai, both strongmen from Nangarhar province, have effectively turned the province into a tiny fiefdom based on a rentier economy.

Abdul Zahir Qadir is the son of former Northern Alliance commander Abdul Qadir and is currently first deputy speaker of the Wolesi Jirga (Lower House of Parliament). His militia was accused of beheading nine ISIS fighters in Achin district that set off a wave of criticism and investigations. District chief Haji Ghalib stated, "If they were criminals then they had to be punished by judicial organizations, but they punished them like a kangaroo court. This should not have happened." Much like the militias of Dostum, Noor and Raziq, though tenuously aligned to Kabul, frequently carry out extrajudicial killings for personal and political gain.

Gul Agha Sherzai was the former governor of Nangarhar province until his failed 2014 presidential election bid. Sherzai’s rule over Nangahar played off American power and support to subvert his rivals. With the influx of American cash into eastern Afghanistan for security and opium eradication efforts, Sherzai focused on informal local networks to bandwagon with the United States, securing much of the funds. Effectively, that established a rentier economy in which Sherzai became the main powerbroker, flushing out his rivals and creating a zero-sum situation.

These are just a handful of some of the key warlords and strongmen that are disrupting southern, eastern and northern Afghanistan. The fall of Kunduz last fall was a result of the reliance by Kabul on militias to hold the line against a resurgent Taliban threat. Abuses and taxes by warlord commanders disenfranchised a population and allowed the Taliban to steamroll in.

When the money stops rolling into the coffers of these warlords, what happens next? Does Kabul actually control anything outside of Kabul and beyond its praetorian guard?

Shawn Snow is a veteran of the U.S. Marine Corps and graduate of the Fletcher School of Law and Diplomacy specializing in Central and Southwest Asia. He served 10 years as a Signals Intelligence Analyst and completed multiple tours of duty to Iraq and Afghanistan. He has been published in Foreign Policy, Washington Post, and Military Times.