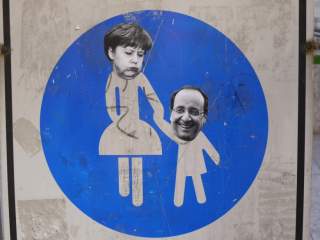 IT’S TOO SOON to pop the champagne corks. Europe, mired in gloom for years, still faces many high hurdles to resolve its crisis. Nonetheless, there are some auguries of prosperity that might invite a stockpiling of party hats and noisemakers. In December 2013, Ireland successfully emerged from its bailout, and Portugal followed this May. This verifiable progress represented a first for members of Europe’s struggling periphery. But this news should only lift spirits so high. If these financial gains make anything clear, it is the need now to go beyond budget control to more fundamental and structural economic reform. Ireland’s finance minister, Michael Noonan, summed up the situation well, characterizing his nation’s emergence from the bailout as a “milestone,” not the “end of the road.” To secure their economic and financial future, Ireland, Portugal, the rest of Europe’s periphery and France (which increasingly resembles the periphery) will have to reform long-standing labor, product and tax practices, and even industrial structures, to promote rather than impede organic growth. These nations must do nothing less than reshape the political-economic models under which they have operated for decades.

Such structural reform has huge significance. Success or failure on this front will effectively determine power relationships throughout the euro zone and the European Union. German dominance, even hegemony, will expand if France and the nations of Europe’s beleaguered periphery fail to enact fundamental economic reform. Without it, they will remain economically weak, financially fragile, dependent on Germany and subject to its lead. With effective reform, however, France and the periphery have a chance to regain economic vitality and shed the need for German support. These are the options. Ironically, all the initiative lies with the weaker countries. Germany is bound to the union. It will have to play the hand France and Europe’s periphery deal it. They will determine whether Berlin gains dominance or whether Europe can restore its former balance.

FOR ALL that remains to be done, Dublin, Lisbon and Brussels are entitled to some rejoicing. In 2009, Ireland and Portugal were insolvent. Each country’s ongoing budget deficit ran at more than 10 percent of its gross domestic product (GDP). They had to pay double-digit interest rates to borrow on global capital markets, an expense that intensified their financial strains. The official bailout lifeline, €85 billion for Ireland and €78 billion for Portugal, bought time for needed budget reform. It also enforced it. Unlike in the ad hoc arrangements made for Greece, Europe was much better organized when it moved on to Ireland and Portugal. Germany and other stronger nations pooled their resources in what they called the European Stability Mechanism, which then, in concert with the International Monetary Fund (IMF) and the European Central Bank (ECB), supported the bailouts. This troika, as it is called, offered subsidized financing in a series of tranches, each conditioned on certain budget and deficit milestones. And the process can claim success. Now, Ireland expects deficits at 4.7 percent of GDP in 2014 and Portugal at 4.0 percent. The improvement has allowed both governments to return to capital markets, where investors have shown considerable interest in their bonds, allowing them to borrow at significantly reduced interest rates.

Gratifying as this success is on one level, it has undeniably come at a terrible cost. The budget austerity demanded by the troika has driven both Ireland and Portugal into deep recessions, especially coming, as the bailout demands did, while these economies were still reeling from the 2008–2009 financial crisis. Unemployment in Portugal remains a heartbreaking 14.3 percent of the workforce. In Ireland, unemployment, having peaked at 15 percent of the workforce in 2012, has improved to about 11.6 percent, but more from mass emigration than economic gains. Worse, ongoing austerity threatens to keep these economies in recession or stagnation at best. Indeed, continued austerity runs the risk of creating a vicious cycle in which the budget restraint so depresses the economy that, despite the best efforts of the authorities, slow growth and additional demands for social services enlarge budget deficits, eliciting more austerity that causes more recession, more budget problems and so on in a downward spiral.

What makes matters even worse is that there is little room for fiscal latitude. Even now, as these countries emerge from troika controls, Ireland and Portugal know that promoting growth and employment through expansive fiscal policies, as France has suggested on occasion, is out of the question. Though they have regained control over their ongoing budget situations, they cannot so easily shed the legacy of past profligacy. Because this legacy has created suspicion among investors and left capital markets with a huge overhang of their debt, the slightest hint of a turn away from austerity now would panic investors. The same constraint applies throughout Europe’s periphery, France included. Any attempts to use expansive policies would quickly cool investor interest, drive up these nations’ borrowing costs and prompt credit-rating agencies to downgrade their national bonds (as they have already done with France’s), raising borrowing costs still more. Finding it increasingly difficult to borrow at reasonable rates, these countries would have to return to austerity or they would quickly find themselves back in a fiscal-financial crisis of the sort from which they have just begun to emerge.

Confronted with such constraints, the countries of Europe’s periphery must either accept the unpalatable option of ongoing recession or find some other way to promote growth. This is where fundamental reform comes in. At other times in other nations, efforts to improve economic efficiency, flexibility, innovation and competitiveness have promoted growth and employment even under strict budget controls. The ability to return to well-grounded growth and financial health has both its own obvious appeal and the added attraction of freeing these nations from their present dependence on Germany. Still, such structural reform will face high political hurdles. Many powerful groups in these countries have vested interests in the old policies and practices and will inevitably resist the necessary changes. Established businesses, many of which receive subsidies or otherwise dominate the status quo, will fight any effort to promote competition or efficiency. Union officials will resist labor-market reform for fear that it would detract from their power and influence. Government bureaucracies will fight the need to change their presumptions and biases.

IF SUCH reform faces resistance, these nations certainly do not lack for guidance on what they need to do. In fact, Germany’s own experience offers one proven blueprint for economic revitalization. Just over ten years ago, Germany, too, had an unsustainable political-economic model. Its industry was inflexible, becoming less productive and competitive. Employment policy discouraged work. Unemployment, not surprisingly, had risen toward 12 percent of the workforce. The Economist fairly called Germany “the sick man of Europe” in 1999. In response, Peter Hartz, personnel director of the Volkswagen Group, offered a series of bold proposals in 2003. To his immense credit, then chancellor Gerhard Schröder embraced them and, against all the recidivist inclinations of his own party, launched a series of successful reforms that have come to be called the Hartz Reforms or, as Schröder preferred to call them, “Agenda 2010.”

These changes, first and foremost, aimed to encourage hiring by making it easier to fire excess or incompetent employees. Previously, the time and expense needed to terminate an employment contract had made German businesses reluctant to hire even promising employees. In a similar vein, Schröder’s reforms liberalized rules on part-time and temporary employment. To put labor resources at the disposal of a revitalizing economy, his policies sought to encourage work by cutting taxes and emphasizing the training of young workers and the retraining of displaced workers. He reduced the attractions of welfare and unemployment by consolidating the two benefits into a basic living standard, widening the range of jobs considered acceptable by the authorities and shortening the time people could collect unemployment from three years to one year, or eighteen months for those over fifty-five.

The reforms took time to have an effect. In the interim, Schröder lost the chancellorship to Angela Merkel in 2005. Now, with the Hartz Reforms widely acknowledged to have revitalized Germany’s economy, Merkel is enjoying the payoff. Today, Germany, unlike much of Europe, is growing. Even in the midst of this crisis, its economy expanded in real terms by 4.0 percent in 2010 and 3.3 percent in 2011. The weight of Europe’s crisis slowed growth to 0.7 percent in 2012 and 0.4 percent in 2013, but there is still widespread confidence in the fundamental strength of the German economy as a result of the reforms. German unemployment stands at 6.5 percent of the workforce, less than half Europe’s average and its lowest rate since reunification in 1990. Youth unemployment, a scourge throughout most of the rest of the Continent, stands at a twenty-year low in Germany. The difference is especially evident among older workers as well. Some 60 percent of Germans between fifty-five and sixty-four work today, well up from 40 percent in 2003. Meanwhile, Germany’s budget is balanced and its debt is falling, both absolutely and as a percentage of GDP.