Is France Making a Power Play By Questioning the Value of NATO? 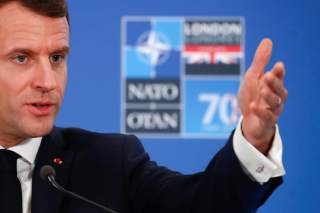 The French president Emmanuel Macron has been in the headlines for his remarks about NATO and Turkey. He called the Transatlantic alliance “Brain Dead” and condemned Turkey for its “unilateral actions” in Syria. He further declared that terrorism, not Russia, is what NATO should be concerned about. How should Macron’s burst of emotions be interpreted? We need to look at the evolving Euro-American relations, the Brexit, Turkey’s rising influence in the Middle East, as well as the Balkans, and finally the French domestic politics.

The French Don’t Like What They Perceive as ‘American Bullying’

Traditionally, the French don’t like what they perceived as American “bullying” and they reacted to it. Having been disturbed by the growing American influence in Europe in the aftermath of the Cuban Missile Crisis, and due to the growing resentment when the United States abandoned France during the 1956 Suez Crisis, the then French president Charles De Gaulle went so far as withdrawing France from NATO’s integrated military command in 1966.

Macron’s anti-NATO remarks coincide at a time when the United States has begun to throw its weight around again within the alliance. President Donald Trump has continuously criticized NATO’s European members for not doing enough for the alliance. Macron has had his share of ‘Trump humiliation’ moments as well. In November 2018, Trump ridiculed the French president for wanting to build a European army and claimed, “citizens of France would all be speaking German if it wasn’t for the U.S. in World War II.” Like DeGaulle, Macron has wanted to undermine the Transatlantic alliance because of his perceived American bullying.

A Less United Europe; Macron’s Opportunity for the Euro-Leadership

Despite its motto “United in Diversity,” the European Union is increasingly becoming less “united” and more “diverse” in its politics. The United Kingdom is doing everything to leave the Union, the east-west divide and north-south divide are deepening, and the purpose of a united Europe is being questioned as it is failing to solve a myriad of such problems as ailing economies, immigration and the rise of the right-wing parties. The continent is gradually looking more like what it was before World War II; everyone is only out for themselves. Poland has already started an insurrection by accusing Brussels of discrimination within the union. Hungary has been punished by the European Parliament “over alleged breaches of the EU’s core values.” Greeks are furious at Brussels for “destroying” their economy. Italians, jolted by being a barrier between the waves of migrants and the rest of Europe, grew angry at Brussels bringing the right-wing Euro-sceptic Five Star movement to government. As the European Union is becoming anything but a union, Macron is propelling himself to the forefront of the European scene, trying to prove his “leadership” skills. Macron’s latest questioning of the purpose of NATO and his bid to reshape Europe must be seen through the lenses of his desire to make France the dominant power on the continent.

Macron’s criticism of Turkey, too, has a lot to do with his grandeur designs. It is not the presence of Russia, the United States, or Iran in Syria that bothers Macron. It is Turkey’s increasing influence in Syria, the former Ottoman province, later a French colony, that sparks his ire. He has further expressed his “concerns” about Turkey’s rising influence in the Balkans, which only a little over a century ago was an Ottoman territory. Turkey’s assertive policies in the former Ottoman territory have Macron singling out Turkey which is a clear sign of his anxiety for the leadership of Europe.

Macron Needs a Distraction at Home

The French president is not doing well at home either and he needs some relief from it. The ailing French economy, the proposed fuel tax hike, austerity measures and the politically suicidal, dreaded pension reform that gave rise to a popular anti-Macron uprising, known as the Yellow Vest Movement (Mouvement des gilets jaunes) are all problems that are shaking Macron’s foundation. Millions of French have taken to the streets demanding Macron’s resignation. With the world watching, protestor violence, vandalism to property, and excessive police brutality have become the norm in those demonstrations, making Macron look increasingly weaker.

To make matters worse for him, the body count is mounting in France’s military operation in Sub-Saharan Africa (Operation Barkhane), where Paris has sent an estimated forty-five hundred personnel. Since 2013, at least forty-four French soldiers have been killed. Most recently, in Mali, two French helicopters collided in mid-air, leaving thirteen soldiers dead, although the militants on the ground claim they shot them down. It was France’s highest military toll since 1983 when fifty-eight paratroopers were killed in a truck bombing in Lebanon. The soaring French death toll in Africa gives the impression that Macron is getting bogged down in his own “endless wars.”

Macron’s woes at home have been in the making for some time now. Most famously, Gen. Pierre de Villiers, then head of the French armed forces, resigned in 2017 amid a row over Macron’s treatment of the French military. De Villiers criticized Macron for “asking to do too much with too few resources.” Worse, once accepted as “liberator,” France is now frowned upon in Mali. The Malians are now chanting “Get out France. We don’t want to see you here” in recent demonstrations.

Macron’s frame of mind reflects the current state of NATO, a less relevant security mechanism without clearly defined goals; also a victim of the power struggle between both sides of the Atlantic. He is also motivated by the seemingly imploding of the united Europe project, which is likely going to bring about a leadership race on the continent. It appears Turkey’s rising influence in the former Ottoman lands has reminded Macron that the French and the Turks used to vie for influence in Europe. Finally, by making the headlines on the eve of the NATO summit, he is trying to influence the NATO members to undertake the burden of his apparently failing military operations in Africa while hoping to get some relief from it at home.