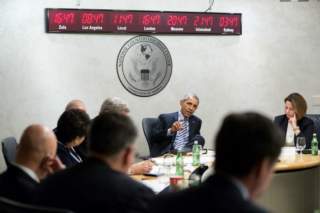 The horrific attack in Nice last week underscores the acute terrorist threat France is facing. There is no simple or single answer to this danger, but the French parliamentary recommendation to create a French version of the National Counterterrorism Center (NCTC) is a smart idea which Paris should implement.

The NCTC was created after the September 11, 2001 attack on the recommendation of the 9/11 Commission. Initially the Bush administration and the American intelligence establishment were opposed to creating a new agency but the Commission report made it a political necessity. At first called the Terrorist Threat Integration Center, it became NCTC in 2004.

The Center services as the focal point for all terrorist threat reporting and assessment. All the various intelligence and security agencies including CIA, NSA, FBI, the Defense agencies and state and local police services share information with the Center, which has representatives from many of them at its headquarters. By bringing all the data to one central service it is more likely that analysts will connect data points together, famously "connect the dots" and assess threats.

The Director of NCTC is responsible for the national threat assessment. When the President convenes an interagency terrorist threat meeting it is the Director who presents the assessment. John Brennan was the first director of the Center.

It also oversees the development of information technologies that are used to share data on threats. This helps make the databases of different intelligence and law-enforcement agencies interact better and share information. This tries to avoid the problem of stovepipes in intelligence collection and analysis that have damaged assessment in the past.

If there was an NCTC before 9/11 there is a reasonable chance the plot would have been thwarted. A center integrating all terrorist reports would have focused attention much earlier on the arrival of known Al Qaeda operatives in the United States in time for the FBI and local police to surveil them, see their contacts and take action.

It is obviously not foolproof. NCTC did not detect Umar Farouk Abdulmutallab, the so-called underwear bomber, who almost blew a plane on Christmas Day in 2009 en route from Amsterdam to Detroit. Nor did it prevent the attacks in California and Florida this year. No security service can prevent all terrorist plots, especially so-called lone-wolf plots that are very difficult to detect in advance. But a dedicated center for integrating all threat information improves the odds.

France has excellent intelligence and security services. I've worked with them in my career over several decades. They are professional - world leaders in their business. But like all intelligence communities there are inherent weaknesses in information infrastructure and sharing. The Nice attacker from Tunisia apparently was known to the police but not to the intelligence community. Perhaps he would have been more likely to be monitored if he was in a broader database.

The French parliament set up an investigation of their security infrastructure after the deadly attacks in Paris last year. Their report was released just before Nice. It's top recommendation is to create a French NCTC. It's a good idea.

Indeed, other European states should consider doing the same thing. And the European Union might want to establish a European version, integrating data across the EU.