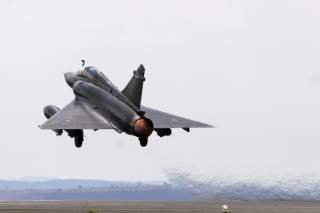 After the vicious attacks conducted in Paris, France has sought the support of the European Union to intensify the fight against terrorism and, in particular, the self-proclaimed Islamic state known as Daesh. While this is good, it is not enough. Paris should also request the support of the North Atlantic Treaty Organization (NATO).

Three days after the attacks, France invoked Article 42.7 of the European Union’s Lisbon Treaty. This article states that “if a Member State is the victim of armed aggression on its territory, the other Member States shall have towards it an obligation of aid and assistance by all the means in their power.” It is the first time that an EU member state has invoked this clause.

This is a good decision—first, because it forces EU member states to swiftly implement the measures proposed to reinforce counterterrorism cooperation in Europe after the Charlie Hebdo attacks earlier this year. Many of those measures have not been implemented.

Second, it gives legitimacy to France’s intervention in Syria, which has weak legal foundations. A resolution by the UN Security Council, which Paris wants, would strengthen France’s case further.

Third, it allows France to justify the delay in reducing its deficit, now that it will have to increase defense expenditure. As President François Hollande has said in reference to EU rules aimed at managing fiscal policies, “the security pact should trump the stability pact.”

But while understandable, this sets a bad precedent. What if Greece made the same case about a Turkish military threat? Paris is also changing the rationale that prevailed in 2012. Back then, the argument, still valid today, was that reducing deficits helps strengthen EU countries and, therefore, defense and security.

Finally, invoking Article 42.7 enables France to obtain military assistance from its EU partners. France expects either direct assistance in the Middle East or indirect assistance for its ongoing operations in the Sahel, Central African Republic or Lebanon, to allow an intensification of its actions against Daesh. Given the French military’s traditional reluctance to use European military assistance, this request is evidence of France’s seriousness. Paris needs support.

Article V is NATO’s cornerstone. It states that “an armed attack against one of more [NATO members] in Europe or North America shall be considered an attack against them all” and that each member will assist the attacked party or parties by “taking forthwith, individually and in concert with the other Parties, such actions as it deems necessary, including the use of armed force.”

Article V has only been invoked once—after 9/11. This led NATO allies to conduct operations to protect North American airspace (Eagle Assist) and strengthen maritime surveillance in the Mediterranean (Active Endeavor).

While Article V is less demanding than Article 42.7, its activation is paramount. This does not mean it would require the mobilization of the United States. After all, Washington immediately offered its assistance after the Paris attacks, a decision that contrasts sharply with the hesitations of the White House over Libya, Syria and Mali. This suggests that when a problem as serious as the Paris attacks arises, solidarity between France and the United States is truly ironclad.

Neither is it intended to gather support for a NATO military operation. There already is a coalition fighting Daesh. NATO doesn’t have a role to play in it. Its involvement, in fact, would complicate cooperation with Russia, which may be at an inflection point after Moscow concluded that the Russian Airbus A321 was downed by a “terror act”; tactical cooperation with Russia may now be in the mix if Moscow prioritizes the fight against Daesh over its support for Bashar al-Assad. More important, a NATO military intervention would be counterproductive because Daesh would present it as evidence that the West is waging war against Islam.

The point of invoking Article V is to mobilize other NATO member states, in particular Central and Eastern European countries that are also EU members. While often lost on Paris, these countries continue to regard NATO as the only relevant defense and security organization for Europe. Only a NATO request, therefore, would enable them to justify to their parliaments and public opinions the need to deliver on France’s call for help.

Another advantage would be to pressure Turkey to work firmly on the coalition’s side. Ankara’s role is essential, but it has been ambiguous so far.

Invoking Article V would also show Central and Eastern European allies that NATO’s collective defense works, even in the case of unconventional attacks. Since the Ukrainian crisis, many (particularly Poland and the Baltics) have worried that NATO would hesitate, or worse, fail to respond to unconventional aggression fomented by Moscow. This would help alleviate these concerns. Sending this assurance message now is especially important because Central and Eastern European allies may think that the West will prioritize the fight against Daesh over their protection against Russia.

Finally, a push for Article V activation would be consistent with France’s reinvigorated NATO policy. In 2009, Paris rejoined the Alliance’s integrated military command it had left in 1966, betting that this would help strengthen European defense (and end speculations that Paris wants to weaken NATO). Paris has been active since, encouraging its partners to address the threats coming from the south and east of the Mediterranean.

France should ask for a special meeting of the North Atlantic Council and request Article V activation. This would not, as many may fear, lead to a military intervention with boots on the ground, as was the case after 9/11. Back then, the Bush administration would have intervened even without NATO’s endorsement.

France is not the United States, and François Hollande is not George W. Bush. President Hollande wants to destroy Daesh, but he cannot lead an all-out intervention and, more importantly, he doesn’t want to make the same mistakes as the Bush administration.

Similarly, invoking Article V will not pressure the current US administration to change its strategy against Daesh. While promising an “intensification” of the tactics he has approved, U.S. President Barack Obama has already firmly rejected changing his approach, which will remain focused on crippling Daesh through airstrikes and assistance to local forces. President Obama, too, wants to avoid a repeat of the Iraq debacle.

The administration must also direct its attention (and resources, which are not infinite) to security dynamics in the Asia-Pacific, which are increasingly complicated with China’s resurgence and growing assertiveness. The purpose of President Obama’s current Asia tour is, in brief, to assure allies there and bolster the U.S.’ rebalance, which will remain a priority for Washington.

Events as horrific as the Paris attacks often drive us to demand quick, fast and definitive solutions. That’s rarely possible or advisable in international politics. But that doesn’t mean action is impossible. France is taking important steps to intensify its fight against Daesh. That fight will be long and difficult, and France needs the support of its allies. Requesting activation of NATO’s Article V would help mobilize them, and it would come with several added benefits. Paris should do so immediately.

Bruno Tertrais is a Senior Research Fellow at the Foundation for Strategic Research in Paris.

David Santoro is a Senior Fellow for Nuclear Policy at Pacific Forum CSIS.