France Plans to Reset Its Relationship With Russia. Will That Work? 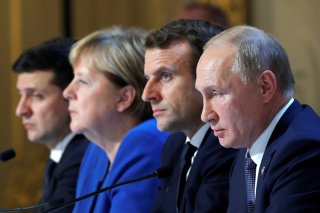 France is once again pushing for improved relations with Russia. During a meeting of European Union officials this week, France’s foreign minister, Jean-Yves Le Drian, pushed to broaden Europe’s engagement with Russia, and this came on the heels of February’s Munich Security Conference when French president Emmanuel Macron called for better long-term relations between Europe and Russia. The French are not alone in trying to get Europe toward some type of post-Crimea accommodation with Moscow—politicians in Hungary, Germany, Greece, and perhaps elsewhere would like to see relations with Russia return to normal. For that to happen though—and for Europe and the United States to end sanctions—Moscow would have to make some major concessions, given its forcible change of European borders in 2014. While it may seem unlikely, the shape of such a deal isn’t too difficult to flesh out—and the benefit of reduced tensions between Moscow and the West may be worth the effort.

From Russia’s perspective, a return to normal relations with the West would first mean an end to economic sanctions affecting banking and finance, the energy sector, and defense industrial trade. Macron claims these sanctions aren’t working, and he’s both right and wrong. Certainly, the sanctions haven’t caused Moscow to relinquish its hold on Crimea or end its intervention in the Donbas. Nonetheless, the sanctions—along with lower oil prices—have demonstrably and negatively affected the Russian economy. In part, as a result of economic stagnation, Russian president Vladimir Putin’s popularity has taken a hit. In sum, the sanctions have affected Russian power, both hard and soft, and Moscow is eager to end them.

If the West agreed to end the sanctions, would Putin agree to return Crimea to Ukraine? Probably not. But would Putin at least agree to leave the Donbas? Maybe so. Such an exchange—ending Western sanctions in exchange for Russia’s withdrawal from the Donbas—wouldn’t be an equal one for the West though. Acquiescing to Russia’s annexation of Crimea, even with Russian forces out of the Donbas, wouldn’t justify ending sanctions. After all, Russia didn’t just violate norms of behavior when it invaded and seized Crimea in 2014, it also broke international law and its own treaty commitments.

Macron’s efforts to engage Vladimir Putin and negotiate with Russia have yielded little in the way of results. The so-called Normandy Format of negotiations between the leaders of Ukraine, Russia, Germany, and France has restarted under Macron’s leadership, but there has been little progress so far. As a result, it is expected that the EU will soon approve another six-month extension of sanctions on Russia.

To achieve progress and get the West—much less Ukraine—to look the other way when it comes to Russia’s annexation of Crimea, Moscow would have to sweeten the deal significantly. It could start by ratcheting down Russia’s campaign of destabilization long underway across and over Eastern Europe. Specifically, Moscow could offer to denuclearize Kaliningrad, its exclave on the Baltic Sea sandwiched between Poland and Lithuania. Denuclearization would need to include the withdrawal of all Russian SSC-8 missile systems, which the United States and its NATO allies view as extraordinarily destabilizing due to its mobility. Over the last several years, Kaliningrad has seen a steady but gradual increase in nuclear infrastructure and related delivery systems like the SSC-8. To enforce all of this, Moscow would need to permit an inspection regime of some kind—luckily, the West and Russia have a long history of successfully negotiating and implementing intrusive arms control inspection arrangements.

Finally, even though there’s strong public support in Ukraine for ending the war in the Donbas, Kyiv is unlikely to get on board unless Moscow accedes to Ukraine’s desire for closer political, economic, and military ties with the West. Therefore, Russia would also need to verifiably end its support for the separatists in the Donbas and acknowledge Ukraine’s sovereignty in choosing its international relationships.

All of this sounds fantastically impossible today. Yet there are several reasons why offering the Russians a roadmap isn’t so crazy. First, with each passing year, it becomes more obvious that Russia is unlikely to relinquish Crimea. Kyiv and its friends in the West need to come to terms with this geopolitical reality, but at the same time they’d be foolish to roll over without getting something in return. The West ought to be explicit on its price.

Second, as suggested earlier, the impact of sanctions on the Russian economy may make Moscow increasingly more willing to negotiate a way out of the impasse. To do so, Moscow needs to understand what it will take to get the West and Ukraine to swallow the bitter pill of accepting Russian annexation of Crimea. It’s admittedly a high bar, but Moscow needs to know how high.

Third, Western solidarity—its center of gravity vis-à-vis Moscow—has long depended on offering Russia an open hand as well as a clenched fist. Dialogue and defense together formed NATO’s two-track path to security and stability throughout its seven decades. As the West increases defense spending and strengthens its military posture, it must simultaneously offer Russia a path forward, otherwise what today appears as minor fissures in Western unity could gradually become unbridgeable divides.

Make no mistake, this is not just another Western reset with Russia, which is a nonstarter in any case during this U.S. election year. None of what’s been suggested will address the ongoing gray zone war waged by Russia against the West, including media manipulation, election interference, aggressive cyber-attacks, and politically motivated assassinations. The West can and should continue its efforts to defend itself, strike back when and where appropriate, compete with Moscow across all domains and reduce Russia’s ability to threaten vital interests.

Just as arms control treaties of the 1970s and 1980s didn’t end spying between the United States and the Soviet Union or their proxy fights across the globe, solving the Ukrainian puzzle won’t turn Putin into a friend, or even a partner. Nonetheless, a deal to reduce the risk of the most catastrophic security scenario in Europe is in the interests of both sides.

Dr. John R. Deni is a research professor at the U.S. Army War College, and the author of NATO and Article 5. The views expressed are his own.